Adam Hocking has grabbed the first ascent of a 'last great problem' on Eagle Crag (Buttermere), Buttermere. Blood Eagle weighs in at E9 6c and takes the very overhanging wall above the descent gully.

Adam had noticed the gully wall about ten years ago. He told UKC:

'You could see from the scree that there was a peg in it and, after asking around, I found out it was an abandoned project from the 'golden child', Chris Hope.'

It wasn't until 2016 that Adam finally went to check it out. 'It was fairly awkward getting into the actual route, requiring a 60m static to get down a series of vegetated ledges to create a belay station,' he explained. 'After a day's work, I managed to get it clean enough to have a proper look. I spent a busy day swinging around on a shunt, followed by another with friends, top roping it ready for the lead. I decided against the lead that day, which turned out to be an error as the weather then changed and the high crag season ended.'

Last year was a write-off for Adam due to work and family commitments, so he was keen to return before life got busy again. The recent spell of pleasant weather provided the perfect window.

'After a quick session reacquainting myself with the moves and cleaning out an old rope from the 2016 session, I managed to send it. The route is pretty good, only tainted by the need for a belay station with an ab rope. The climbing is varied and continuously hard, with a burly lower half to a peg, followed by some crimpy, slightly steep climbing above. Care is needed near the top, as a ground fall from that height would be the end game!'

Read more
Unfortunately, Adam doesnt have any photos of the route.

The Lake District has been the site of a spate of new routes at lower grades recently. Check out the Fell and Rock route archive.

Adam Hocking has bagged the first ascent of The Keswickian (E8 7a) on Gouther Crag in Swindale. He also made the second ascent of The Ego Has Landed (E8 6b) on Eagle Crag, Langstrath. Both ascents are captured here on video. 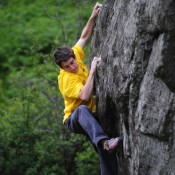 Tyler Landman takes us through his bouldering pick of 2008. Featuring Dave Graham, Paul Robinson, Daniel Woods, Alex Puccio and others. This article combines Tyler's in-depth knowledge of cutting edge bouldering with a selection of videos of some of the World's...

Great to see you get this done. Top line. Looks really good.

Still got it Hock.

As an aside - all the replies to this topic seem to display in bold, is that deliberate?