Molly Thompson-Smith has followed her recent redpoint of La Fabelita 8c at the Santa Linya cave in Catalonia, Spain with an ascent of Rollito Sharma extension (8c) 8c. Molly has been travelling back and forth to Spain this winter and returned earlier this month for some unfinished business, having previously ticked Rollito Sharma (8b+) 8b+.

'I wanted to try Rollito Sharma because I was told I might struggle on a big move in the middle, and that seemed like a challenge! I liked how bouldery the route was with some pretty good holds and rests, and had a play on it after I did La Fabelita on our second trip to Spain. The move was big but I managed to find another way of doing it, making it hard but still possible.'

Molly ticked Rollito on her next trip, sticking the big move and continuing to the top. Her sights were then set on the extension.

'I thought going to the break looked like the logical line of the route and found the climbing was enjoyable. After some time in Siurana we came back to Santa Linya and after dropping the big move in Rollito, I could go all the way on my next go!'

Despite recovering from a ruptured finger pulley for the most part of the year, Molly has racked up an impressive list of hard sport routes in recent months, including two 8cs and two 8b+s in addition to winning the British Lead Climbing Championships and placing 11th in the Innsbruck 2018 IFSC World Climbing Championships. 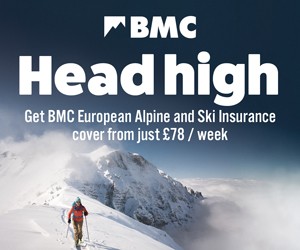 The Ticklist #51 Hard Bouldering and a Gristone Flash

This week's Ticklist has some hard bouldering ascents at home and abroad, along with a hard grit flash...

The next video in the BMC's Respect the Rock series covers sport climbing at Raven Tor, the classic limestone crag in the Peak District, home to the famous Hubble 9a and some of the country's hardest sport climbs. Steve McClure and Molly Thompson-Smith explain...

Keen Roof 8B by Molly Thompson-Smith

Molly Thompson-Smith has ticked her first 8B, Keen Roof at Raven Tor, in just two sessions. Molly is only the fourth...

No comments on this yet? Awesome effort especially considering the finger injury!

I think we've already been spoilt by Molly's impressive comeback and return to form. It's quite a compliment when a fast 8c ascent is taken almost as expected!