A Traverse of the Cuillin Ridge

In this regular feature from the brand ("British mountain guides")] , Mike Pescod from Abacus Mountainguides shows us the classic UK outing of The Cullin Ridge.

The famous Cullin Ridge on the Isle of Skye is perhaps the most sought-after mountaineering challenge in the UK. Not to be underestimated, the ridge offers 10km of spectacular Scottish mountain scenery, and is a must do for all competent hill-goers and climbers in the UK.

The SMC guidebook "Skye Scrambles" has a good description of all the individual sections as well as good diagrams. Andy Hyslop's mini guide to the ridge is possibly the best resource to have though. The Harvey's map "Skye The Cuillin" is the best map and is printed on waterproof paper. It's at 1:25,000 but has the main ridge at 1:12,500 scale and also describes common routes on the sides of the main ridge.

The logistics can be awkward down to the single track roads and the length of the traverse. Two cars are often necessary and being based at Sligachan is probably best. Leave one car here and drive to Elgol to take the boat to Loch Scavaig. If it all works out you will get back to Sligachan after the traverse. However, if you escape off the ridge early you will end up in Glen Brittle a long way from your car.

Going from South to North as is most common in the summer, you have two options.

From Glen Brittle camp site it is best to walk up the newly made path to Coir a'Ghrunnda. There is good water here so you don't have to carry any for the two hour walk in. A short boulder slope from the west end of the loch takes you to the crest of the ridge. Dump the bags and go out to Sgurr nan Eag to start your traverse from there.

The better option these days is to take the fast boat from Elgol to Loch Scavaig. You can ask to be dropped off on the west shore for the easiest route up to Gars Bheinn where purists will say you have to start anyway. This approach has the added dimension of a boat trip making the whole enterprise feel that much more adventurous, and is recommended.

There is far too much detail in the 11km along the ridge to include much of a description here. There is continuous scrambling and occasional sections of rock climbing. Getting along the ridge involves more route finding skills than navigation and it takes a while to get used to the structure of the rock to choose the best route. There are a few sections where time can be saved (or lost) with a bit of knowledge of the best line to take so spending a few days scoping out these sections is time well spent. In the mist, completing the traverse is all but impossible without prior knowledge of the best line.

Sgurr nan Eag and Sgurr Dubh Mor. Sgurr nan Eag involves only very simple scrambling if the best line is taken, this being on the west side of the crest. Sgurr Dubh Mor has a complex line that is particularly confusing in the mist.

You can lose a lot of time in the TD Gap so it might be worth doing this with your rucksack on or practicing hauling your packs. It's good to know how to avoid it as well in case it turns out to be wet – traverse under the west side of the TD Gap on a trail in the scree to the Bad Step of the south west ridge of Sgurr Alasdair. Scramble up this and reach the top of Sgurr Alasdair.

Sgurr a'Mhadaidh and Bidein Druim nan Ramh are complex peaks, each with several tops. The central peak of Bidein usually requires an abseil to descend and finding the abseil point is tricky as it is not obvious.

Spend some time on the ridge before you set out on your traverse. The Cuillin hills are unique in the UK for their continuously rocky nature and the relentless exposure on the crest of the ridge. It's the never ending concentration required that is so draining for most people and getting used to the scrambling both up and down will help with this. By moving efficiently and confidently on exposed sections you'll save lots of energy, both physical and mental, so get some long days in on the ridge first.

Set your rules of engagement. What is your objective? To reach all eleven Munros? To get from end to end? To do these and to climb the TD Gap and Naismith's Route? Make sure you agree your objectives with your partners but be prepared to change these if the weather does not work out as expected.

Decide whether to bivi on the ridge. Watching the sun set over the sea from a camp on the crest of the ridge and scrambling on the ridge in the early hours of the next day are great experiences. The down side is carrying the extra gear required. Going light and fast is great, as long as you do move fast. Even then you should expect one of the longest days of mountaineering you'll ever do. Another idea if the forecast is good, is to have a big dinner then walk up in the evening to sleep on the ridge. You'll have less to carry then and will have a head start on the traverse.

The shortest descent seems to be to reverse the west ridge of Sgurr nan Gillean and descend by Coire a'Bhasteir.

Why is it So Special?

It's the toughest single mountaineering challenge in the UK so it's always going to be valued very highly. However, there is so much more than this. Being on an island and rising straight out of the sea makes the setting outstanding. Sections of the ridge require you to stay absolutely on the crest with the full drop down to the sea on one side and down to Loch Coruisck on the other. The nature of the volcanic rocks is fascinating, following stepped dykes sometimes and crossing the many gaps where dykes cutting across the ridge have eroded. The combination of all these makes it very special but it's even more special because you have to work hard and have some good luck to complete a traverse. As with most things, the more you have to work to achieve something, the better the reward.

Mike Pescod is a British Mountain Guide based in Fort William. 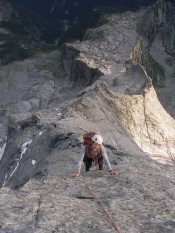 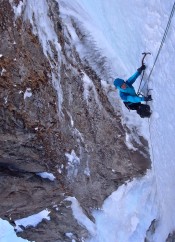 On Friday, 4th May, Es Tresidder, 27 of Kinghorn, Fife broke the record for the traverse of the Skye Ridge with a time of 3 hrs...