In this regular feature from the British Mountain Guides, Bruce Goodlad from Mountain Adventure Company shows us the classic North Ridge of the Piz Badile, Bregalia, Switzerland.

The North Ridge of Piz Badile has to be one of the most compelling lines in the Alps; a perfect line of granite soaring into the sky. Combine that with a beautiful valley base a nice hut and brilliant rock and you have one of my favourite alpine routes.

You can abseil back down the route but this is incredibly awkward as the terrain isn't steep enough to abseil easily. Your rope gets caught continuously and it will take about as long to go down as it did to go up. Trust me I have done it twice! It is far better to descend the south Face to the Gianetti hut then walk back round to the Saas Fura hut the next day.

There are a few guide books that cover the Bregalia. Schweiz Plaisir Sud by Jurg von Kanel has the best Topo. Solo Granito by Mario Sertori and Guido Lisignoli is great and the Alpine Club Bernina and Bregalia guide by Lindsay Griffin also works. The map is the 1:25,000 Sciora map ref 3084

Bondo is the a beautiful little village at the base of the Badile. It has a great camp site (though it is next to a sawmill which isn't great if you want a lie in). Vicosoprano is a couple of km away and has a camp site and a selection of hotels.

The North ridge is approached via the Saas Fura hut. To get to the hut you drive (or walk) up a toll road from Bondo then hike for about 2hrs to the hut. There are bivi sites higher up on the approach to the mountain. From the hut an obvious track leads up through a section of forest then boulders to an area of slabs below the ridge proper.

It is probably worth putting on helmets and harnesses below then slabs then you can carry on scrambling up to a notch in the ridge. This is where you would head left if you were climbing the Cassin.

Above the notch the the route trends left onto the flank for a couple of pitches before gaining the crest of the ridge. Once on the ridge the route finding is pretty obvious until about half height where you need to move right into a squeeze chimney behind a large block then climb the crux pitch back left. Higher up you need to keep an eye out for a triangular overhang where you move right and up a groove to avoid being sucked onto the north face. With the topo it is all pretty obvious.

It is possible to climb the route and make the descend the south face with a single 50m rope. This makes the belay change overs much faster. Most of the pitches are 30-40m so a longer rope will have you handling more rope on each belay. All the belays are in situ (door knocker style bolts) so using a reverso type plate straight into the anchor can speed things along.

It is worth being first out of the hut and walking quickly to get to the route ahead of the crowds as the route can be very popular. If you stay in the hut there will usually be people bivying who will beat you to the route but if you climb fast you can get out in front and it feels like you have the route to yourself.

Depending on the conditions you may need an axe and crampons to get back from the Gianetti hut back to the car, check the conditions with the hut guardian to confirm if you need them. If you do make them as light as possible.

It is possible to climb the ridge as soon as it is clear of snow but it can be cold being north facing, late June to early September can be the best months.

The easiest descent is down the south face to the Gianetti hut from the summit scramble down a series of ledges then make an abseil down a chimney, scramble down some more then make another ab onto a big ledge if you head right you will pick up a series of abseils which take you to easier ground. There is ab tat all over the place here so it is difficult to find the best line but it is easy enough to sketch it together. It is also possible to scramble down on the left but you are exposed to stonefall from parties above if you do this.

After a night in the Gianetti hut hike back to the Saas Fura over the Porcellizzo and Trubinasca passes this takes about 5hrs.

The purity of line on the North Ridge combined with the quality of the rock make for an amazing outing. The views are superb looking out over the jagged peaks of the Bregalia.

Bruce Goodlad is an IFMGA guide living full time in the Alps. He guides and instructs all aspects of mountaineering and skiing and is the author of the book Alpine Mountaineering - Essential knowledge for budding alpinists by Pesda Press.

Another Day In Paradise, 6b+, Piz Badile 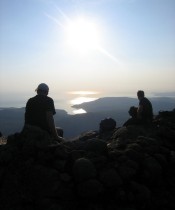 Over the last few weeks we have been working hard to overhaul the UKH Route Card system. The route cards feature over 170...

VIDEO: Adventures on the Piz Badile

Tonight's Friday Night Video follows on nicely from our recent article 'The Occasional Alpinist's Guide to the...

The UKHillwalking route cards system has gone live. It's been months in production - but we hope you agree it's been worth the...

Alex Buisse
7 May, 2012
Interesting, I have always heard that the North Ridge was the "normal" descent for the Cassin route. Does it mean that people downclimb it, then, or are they dealing with the stuck ropes and shitty diagonal abseils as Bruce describes? Curious as Piz Badile is definitely on my list for this summer.
adrspach
7 May, 2012
Only part of the ridge (low down) is the descend. On the right side facing in in the NW face is so called La Strada. Linkage of abseiling stations. I believe in one of the guide books is description (probably J. Von Kannel. It is possible to abseil and down scramble in 3 hours 2x50m ropes and 3 people team. I have done it twice about 1992-93. In thet time there even used to be decent bivi spot right next to the notch.
LukeO
8 May, 2012
When I did the north ridge last summer the standard descent for most parties seemed to be descending the south side to the Gianetti hut (I think this is the descent referred to in the post above - it appears in the now outdated blue version of Plaisir Sud*). This means a long walk back the next day across two passes (or alternatively taxi from San Martino back to Bondo/Laret, EUR80 odd). Late in the season, though, there's no need for crampons or axe. The two guys we met on the descent who had done the Cassin did the whole three day trip with tiny sacks and running shoes. The Badile N ridge is one of the few routes I'd consider doing again. Definitely will be getting the taxi back next time though... *If I recall correctly, the latest Plaisir Sud has had the Badile routes withdrawn - I imagine a few people might have come a cropper approaching either the N Ridge or, worse, the Cassin, with their Plaisir hats on. On the other hand it's a shame as the topos are handy. Hope this helps. L
jonnie3430
11 May, 2012
I don't understand what you are saying, could you be a bit clearer? You can descend the North Ridge to get off after the Cassin, it is as much of a pain as Bruce describes and took me longer than climbing the route. I'd descend the hut to the far side and walk round via the two passes if I was up there again. I met one party that managed the north ridge and two passes and back to the Saas Fura in one day (they continued down to car park too,) there may be a snowy descent as part of the walk round, so, as he says; poons and a pick may be needed. There is a shortcut on the North Ridge abseil which is going down the line of Another Day in Paradise, but it is hard to find the top belay and not recommended as you may be abseiling on climbers.
Add Comment
Loading Notifications...
Facebook Twitter Copy Email LinkedIn Pinterest