I write this guide with a slight caveat; Hampi is going to change drastically in the next couple of years. Under the guise of the area being a UNESCO World Heritage Site, all of the guesthouses within a 7-8km radius around the main temple area are going to be knocked down. This is an attempt to 'encourage' tourists to stay in Hospet, the nearest large town roughly half an hour away. Unfortunately, it's all very shady and underhand; a very sad end to many of the businesses that have flourished over the past couple of decades.

One of the guesthouses, Goan Corner, has a final appeal at the Supreme Court which they are not overly confident of winning. So it is likely that either this winter or next, there will be nowhere to stay in Hampi. Ultimately, what many guesthouse owners want to do is to set up new businesses outside of the 7-8km radius and continue to cater to the climbers that have been visiting the area for decades. Hopefully they will have some success and create a new hub for climbers, albeit in a different area - there's certainly enough rock...

Hampi is the Ancient southern capital of the Vijayanangara Empire and in the 1400s was home to nearly half a million people, before being sacked in the mid 1500s by Muslims from the Deccan Plateau. It is now a small town home to tourism dependant businesses and farmers. Climbers have been visiting Hampi since the 1980s, but the area really only became popular after Big Up Productions made the film 'Pilgrimage' featuring Chris Sharma.

The first thing you notice when you wake up on the train or bus that is taking you to Hospet, is the amount of granite surrounding you is gradually increasing. Miles and miles of huge boulders and monoliths scatter the truly breathtaking landscape. I've heard it been described as 'the size of Yorkshire and fully of boulders' - by a Yorkshireman obviously. To get some context of what the biggest bouldering area in the world looks like, climb one of the large hills at sunset and gaze out over the Boulderer's Empire.

Hampi is split by the Tungabhadra River and when the climbing was first developed it was on the temple side. Now almost all climbers stay on the opposite side of the river on 'Hampi Island.' When you get the boat to the Island, it's like entering an oasis of calm, especially if you have been travelling for a few days. Many of the guesthouses have bouldering pads that you can rent, and there's also a couple of climbing shops open where you can buy essentials such as chalk and tape. Hampi Island is also a great place to meet people to go climbing with, making the destination perfect for a solo traveller.

Climbing starts early in the morning to make the most of the cooler conditions. We were getting up at around 5:30am, having a quick breakfast of porridge and tea, then heading out and bouldering until 11 O'Clock. After this it simply becomes too hot and most climbers retreat to their guesthouses for some food and a few hours in a hammock. At about 4 O'Clock it has cooled down enough to consider climbing again, although it's worth tapering your expectations and choosing your problems wisely because the rock has been baking in the sun all day.

As mentioned previously, the rock is sharp. Very sharp. The closest comparison I can think of is Bishop. When you first start climbing, take it slow; not too many dynamic moves, careful on the sharp holds and it's worth using sand paper to remove little flaps of skin that will only get worse. If you've played the first few days right, then after a rest day you should have some rhino hide instead of finger tips.

Whilst being known for the sharp, brutal crimps, Hampi has a wide variety of different climbing and often some of the best problems are at the 'slopier ' end of the spectrum. Around the river there are a handful of climbs on beautiful water-washed grey granite. There are stunning sharp and slopey aretes and lots of very technical slabs. It's a very diverse climbing area with a wide range of grades, different styles and heights.

A great option in Hampi is to head off the beaten track. It is without doubt and by some margin, the largest bouldering area in the world. Only a small amount of bouldering has been developed relative to the area's size. To develop a new area, it's worth hiring a scooter and driving for about 15 minutes in any direction and you will undoubtedly come across some new climbing.

December and January are the best times as it's the coolest time of the year and extremely unlikely to rain. People climb in November and February too, but expect extreme heat!

The easiest option is to fly to Bangalore and then get an overnight train or bus to Hospet (the nearest big town to Hampi). Many people fly to Mumbai or Goa, it takes a bit longer but you get to see more of India! From Hospet, hire a Rickshaw and you should be in Hampi within half an hour.

Most climbers stay on Hampi island, which is easy to get to via a boat that runs throughout the day (about 20p). Goan Corner is the most popular guesthouse for climbers, as they hire crashpads, make incredible food and have a very charismatic owner. They cater for all budgets, from about £2/night (sleeping on the roof) all the way to £10/night (en-suite, double bed). There are many other guesthouses on both sides of the river, offering accommodation for all budgets.

Without resorting to over-exaggeration, Hampi has the best food I have ever eaten. It's not like Indian food in the UK. Expect a perfect blend of herbs and spices in a wide range of vegetable and meatdishes, fresh breads and tasty lassies. Be careful what you eat initially and avoid washed salads, meat and dairy. Although most guesthouses and restaurants are very clean and you are unlikely to get Dehli Belly from the food - avoid tap water.

Many guesthouses rent climbing equipment. There is a very useful shop run by two local climbers Tom and Jerry and they sell and hire most of the equipment you will need in Hampi. Crash pad hire is roughly about £1/day.

The most recent guide Golden Boulders was written by the German publishing company GeoQuest and they have done a good job of researching a huge amount of problems from the past few decades. Hampi is a strange area; there are very few locals, meaning that when new climbing is developed the information is very likely to travel home with the first ascentionist.

There are incredible Hindu ruins everywhere you look. The Hanuman Temple was a personal favourite, but there are many more. It's worth buying a Lonely Planet for Southern India, as it has a large section on Hampi. Other rest day activites include hiring scooters and heading to the resevoir for a swim, attending a Yoga class and eating in one of the many incredible restaurants that Hampi has to offer.

It's worth packing things like disinfectant spray, immodium and electrolyte powder. Although Hampi is generally clean, being sick in India is a common occurence.

Beware of stray dogs and bats, most are friendly but they can carry rabies.

India is a very conservative country and female travellers should be aware that their attire and behaviour are likely to be observed closely. Hampi is used to tourists and as such is a bit of a bubble, but elsewhere in India be mindful of what you wear as unwanted attention from men is a common problem, although quite avoidable. The Lonely Planet has some handy tips for women travellers.

In this week's Ticklist, we have an eclectic mix of sport, trad, bouldering, and a desperate alpine multi-pitch... Stefano...

Guy Atkinson
9 Jan, 2017
Miss this place so much, can't wait to get back there next year hopefully. Psyched that you've listed cosmic friction as possibly one of the hardest climbs there as i've actually done it and watched plenty of much much better climbers than me unable to step onto the first move &#128540;
Frank the Husky
10 Jan, 2017
If anyone wants my copy of the bouldering & climbing guide to this place get in touch. kinderguide@hotmail.com
SuperLee1985
10 Jan, 2017
This place looks amazing, thanks for the article, a real shame about the politics.
papashango
24 Jan, 2017
Any idea where to look for updates on the guesthouse situation? Thanks
jonnie3430
11 Feb, 2017
Goan Corner fb page? The staff there are really nice.
Add Comment

Known for its wilderness, waterfalls, mountains and coastline, New Zealand's South Island offers a smorgasbord of adventure sports for the globe-trotting tourist. Tourism has been growing exponentially in New Zealand in recent decades and annua...

The small resort of Cogne sits at 1500 metres above sea level, on the edge of the Gran Paradiso National Park in northwest Italy. As well as being the cross-country skiing capital of Aosta, with over 70 kilometres of ski trails, Cogne...

Destination The Ridges of Norway's Jotunheim

Majestic and adventurous, the Jotunheim mountains are the true alpine peaks of Norway. If long sharp ridges are your thing, the area is a goldmine. Let local expert Jamie Simpson be your guide...

Bohuslän is in South West Sweden, close to the border of Norway and about an hour and half drive North from Gothenburg. The name of... 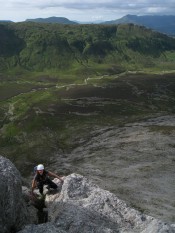 Rising forbiddingly out of the bleak Connemara landscape, the Twelve Bens (a.k.a. Pins) are as rugged as any massif in the west of... 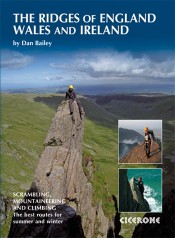 The spectacular pinnacle of Napes Needle is Lakeland rock's ultimate must-do. Arguably the most iconic symbol...

UKC user Cara-Lyn Reynolds gives us a complete logistics guide covering everything you need to know for a trip to Toubkal... 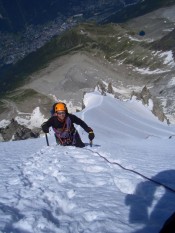 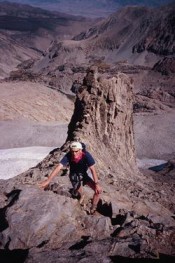