An Alien On The White Coast - Costa Blanca Bouldering 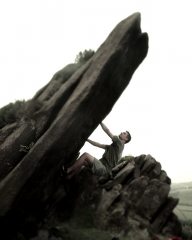 Think of Costa Blanca and to most it will conjure images of crag after impressive limestone crag, safe bolted routes and a large quantity of unclimbed cliffs. However, taking into consideration that the Spanish have only developed the crags nearest to the road, it's always been presumed that they are hardly likely to walk miles just for some 'trivial' bouldering - subsequently the region has never really been associated with bloc sport.

Katie on "The Orange Grouse" on the Gheko Boulder - Olta

However this is now changing with more and more people out for a quick fix on a Family Holiday – or to entertain the most diehard of climbers on a rest day.

My first trip to the Costa Blanca saw me at the Orange House activity centre, fishing for any bouldering possibilities the area had to offer - which no one could quite believe given the classic crags of Sella and Toix a stones throw away and the huge Mountain of the Puig Campagnia towering over me.

Eventually, I was shown El beach Paradiso, a nudist beach at Villajoysa. The problems had big 'blobby' holds and some impressive over hanging caves which looked like they had potential. However after breaking off a hold the size of a shoe box, I ended up cracking my head on the only rock on the beach and ended up with 8 metal staples - however, my resolve, if not my head, remained intact to find some quality bouldering problems!

Fast forward five months later, another trip to the Orange House and this time seasoned ex pat Al Evans, sympathising with my love of bouldering and sniffing out anything new, told me of some fine bouldering that he had discovered in the area.

First was the beach at Denia (near Les Rotes) Platja Les Arenetes, which on first impressions does not look like much. However as soon as you are on the sands with the small, overhanging, perfectly formed crag, it becomes apparent that the venue could have been designed by Bendcrete. A perfect set of pockets and pinches on a sweep of browny rock...which was duly, allowed grit status. There's a lot more potential here too. The crag seems to peter out with bad landings but further on, lies a large secret cave to discover and enjoy. All in all it's a lovely place to boulder - with the waves lapping against the shore - it's perhaps the perfect place for a family to go or for a rest day.

To whet my appetite further, I had been promised bigger and better things to come and so we made our way to Montessa. The crag stands proudly next to the ruins of the castle above its namesake town, and although the bouldering there has in the past been largely ignored in the guides, we were fortunate to find there is a guide available in the town from Camil's Rock bar. The guide "La Mola de Montessa" contains both climbing and the 40 strong bouldering problems and a percentage of sales goes towards the bolt fund out there.

After a warm up route, I went in search of a boulder or two and was not disappointed when I rounded a corner from the buttress of El Tormo Gros, to see a pristine hulk of prime limestone begging to be climbed! There followed a session that seemed strange to the sport routers. Clearly some had never seen a bouldering mat before and questioned my motivation – and for a few, brief moments, before topping out on a few great problems, perhaps I did too...

..And there was still more to be found. As I left, I got a tip-off about some boulders in the woods below Olta. That settled it and five months later and I was there again going through customs to Alicante sans rack but with bouldering mat firmly attached - and getting questioned why I had a fold out bed with me on the way to Spain.

Danni on The Joshua Tree - U2 Boulder - Olta

Olta has a great Font feel about it, with the boulders spread out in amongst the forest and (oddly) has a slight touch of Wimberry too – as the further up the hillside you head – the more the perfect formed blocs unveil themselves as you slog up to the crag. The opening of the Blocs has been mostly of the exploratory type, and there's still lots to go at for the bouldering faithful - some highball nastiness, overhanging crimping and heady slab fests on perfect Blanca fluted - pocketed - sharp limestone.

There are other areas that have been documented on the White Coast including a secret roof that has been developed by the Edward's and is said to be nails. There are various other boulders developed by locals - Al Evans and others, which until the projects are completed, remain secret between those in the know. The obvious car park boulder at Sella however, is one you will all see out there and now contains a few fun lines for the boulderer.

If you fancy something different to the usual clip ups on the white coast, I guarantee that the venues mentioned here will not disappoint. Best interspersed with the routes, the circuits are fun and I haven't even mentioned the sublime deep water bouldering at Morira down the coast from Toix, above the beautiful aqua marine Mediterranean that simply takes your breath away....

The 2013 edition of the popular Costa Blanca Rockfax. 456 pages, 3000 routes on over 40 crags. Covers sport climbing and trad climbing from Murcia,...

The rocky citadel of Guadalest has always been known for the bouldering available there, but recently the extensive walls have been developed and now...

Tom Phillips
9 Apr, 2007
is there a topo yet for Olta bouldering?
Michael Ryan
9 Apr, 2007
There is Tom. Simon sent one. I'll have to digitise it and get up with the article. Mick
Tufas Mum
9 Apr, 2007
We give it out to guests that are staying here. Sam Orange
Simon
9 Apr, 2007
Hi Tom, Yes there is - I did an overall map and a 2 topo's on the 2 boulders that were opened that I sent in, Hopefully Mick will have them up soon for your trip (thanx Mick) - happy bouldering! Cheers Si
BelleVedere
11 Apr, 2007
The fomatting is a bit funny round one of the pictures - the words overlap it making them unreadable.
More Comments
Add Comment