Moonarie sits on the southeastern rim of a bowl of layered quartzite in the Flinders Ranges of South Australia, about five hours' drive north of Adelaide. The layers form a natural arcing ridgeline that exposes tiers of orange and purple rock whose colour changes at dusk and dawn. The uppermost of these tiers is home to the most impressive of Moonarie's lines, which reach up to 100m in height. When climbing, expect to pass over bullet hard layers that take great protection, as well as grittier layers that are more friable. Rooves, corners, overhangs, walls and cracks are abound. Although the rock on the classic routes is superb, expect to find a bit of choss on the less travelled routes. This isn't Stanage.

The crag is divided into several sectors; there is the large upper tier where most of the classic routes are found (including the Great Wall, Checkers Wall and the Ramparts), and several small crags beneath and at the sides. The main attractions being (unfortunately) the furthest away from Base Camp, requiring a 45 minute uphill walk.

Moonarie is really an intermediate to advanced climbers crag. Trad is the order of the of the day, but expect to find the odd bolt on trad routes here and there, and there are a few sport climbs. Both single and multi-pitch routes can be found; these are described in a guidebook by Tony Barker, published in 2000. This is an old-school guide available in Aussie climbing shops, with sketches of crags and sometimes lengthy and confusing route descriptions. However, there is a new photo topo guide on its way, which should be available within the next year or so. On top of this, there's also room for development if you want to walk a bit further or explore the boulders littering the base of the crag.

Like its "neighbouring" crags Arapiles and the Grampians, climbs here use the Australian grading system. Conversions between this and the British system can be found online at rockfax.com/publications/grades. However, bear in mind that the Australian system doesn't account for exposure or protection, and so you won't really be sure if you're getting on something runout and sketchy or a super-safe boulder problem. On top of that, many of the climbs at Moonarie have an exposed feel and were graded by old-school trad climbers. You've been warned!

There are over 450 routes at Moonarie, with more to be developed. The classics include:

Pagoda (15) – an old-school classic up the huge detached flake breaching the sunbaked expanse of Checkers Wall above Top Camp.

Outside Chance (16) - an exposed and airy arête on the edge of the Great Wall.

Downwind of Angels (19) – perhaps the most talked-about route at Moonarie, this route provides compelling crack and face climbing.

The Big Picture (20) – one of the best routes of its grade, providing brilliant face climbing up Checkers Wall.

Pine Crack (19) –sustained and technical climbing up the prominent crack behind the pine tree.

Since Moonarie is in the desert, the weather can rollercoaster from one extreme to the other, with summer (December and January) temperatures breaching the magic 40˚C, while mid-winter lows get down to -4 ˚C overnight. Therefore, it's best to visit between March and May or September to October. Between these months you get the balance of dry weather and warm sunshine, without being freezing cold in the shade. Also remember that the Australian sun is way stronger than the sun in Europe – expect unprotected skin to get burnt in 30 minutes, and watch out for sun stroke.

Moonarie is located 450 km north of Adelaide, the state capital of South Australia, which has routes flying to most major European destinations. Although there is a weekly bus service from Adelaide to the Flinders Ranges, you're way better with a car - expect a 4-5 hour drive. Good options for flights include those travelling via the Arabian peninsula (e.g. Dubai or Doha) which are split into an 8 hour flight followed by a 13 hour stretch to get you down under. Alternatively, fly via Singapore. At the time of writing, you can get flights for around 800 quid. Since you've made the effort to go all that way, you might as well check out Arapiles (5 hours from Adelaide) and the Grampians (6 hours drive) while you're over.

Camping is free at Base Camp, a short drive up a dirt track from the highway. However there are no facilities (and no water) so make sure you take everything in and out with you. It's also a good idea to bring in your own firewood to reduce environmental pressure. And make sure you bury your shit! For the proper experience, hike up to "Top Camp" with all your gear. It's an hour or so walk from the car park, and will save you the walk each day. There's a water tank up there, but if you rely on it you're at the mercy of the seasons and how busy the crag has been. For a more glamorous trip, stay at Wilpena Pound Resort or Rawnsley Park Station, which are within a 30 minute drive from Base Camp. These resorts offer unpowered camping sites starting at $15, through to resort rooms at around $200 a night.

Remember to bring everything with you! There is a general store and petrol at Wilpena Pound Resort – but it's going to be pricey. Other than that, the next nearest shop is in Hawker, a half hour drive, or Quorn (just over an hour away) which has cafés, a pub and a small supermarket stocking a range of groceries beside vegan protein. There are no climbing shops nearby.

It is worth noting that there is no mobile reception at the campground or at the crag. You need to get to the top of the climbs to find reception. Given that even on the busiest weekends you're not likely to see more than a couple of other climbers, you really are on your own.

Due to its remote location, the night sky at Moonarie is exceptional. Look out for the Crux – a notable constellation in the Southern Hemisphere (this is not a joke).

The Flinders Ranges are also renowned for bush walking and wildlife, and you can see all the weird sh*t that Australia has to offer (except the crocs). Besides that, consider checking out the cafés in Quorn, or the 6000 year-old Aboriginal art at Arkaroo rock, which tells the creation story of the Flinders Ranges. Once you're done, try some bush tucker accompanied by a local wine. 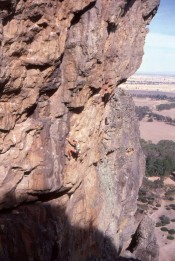 The saga in Australia's Grampians/Gariwerd National Park continues as Parks Victoria have released a draft of their management...

Following rediscoveries of Traditional Owner cultural heritage in the popular climbing site of Dyurrite/Mount Arapiles in...

For this week's Friday Night Video slot, we have a double bill of some extraordinary climbing in Australia. The first film shows...