Peter Herold runs The Lemon House on Sardinia - a guesthouse for climbers. In this article Peter gives us a feel for multi-pitch sport climbing on Sardinia's east coast and explains how to tackle these routes.

Most visiting climbers from the UK come to Sardinia to climb single-pitch sport climbs, often choosing a base such as Cala Gonone or Ogliastra so that they can combine a beach holiday with climbing. But they are missing out - there are amazing multi-pitch sport routes on the island and you can easily find yourself high up on a wonderful route, in a beautiful and remote setting.

It is sometimes said that the main difference between the climbing on Sardinia and on Kalymnos is Sardinia's multi-pitch routes. With the walk-ins, the abseil descents and the 'Alpine' feel, you can expect long and satisfying days out that you won't easily forget. The only bit of extra gear you will need in order to open up this world of multi-pitch challenges is an extra rope - even Ryan Air should be able to cope with that!

Though Sardinia has multi-pitch trad routes – notably on the Gallura granite in the north east, and on Punta Cusidore or at Surtana, whose limestone lends itself to placing nuts – the focus of this article is on modern multi-pitch bolted sport routes, and in particular those by the sea, which combine the best of the island environment with great climbing.

The main areas for multi-pitch sport climbs in Sardinia are:

The Cala Goloritzé needs no introduction and is often the topic of UKC forum discussions. Its routes are short, easy to get to (by RHIB from Cala Gonone or Santa Maria Navarrese, but for the full experience walk down from the Golgo plateau) and straightforward to descend from. There's nearly always someone on the beach, and there's always a mobile phone signal. Climbing here doesn't feel too adventurous and these routes are a good introduction to multi-pitch climbing. The most popular route on the Aguglia is Easy Gymnopedie (6b) 6b+ (5+ obl) - topo here . One of the best routes isSole Incantatore (6c) 6c (6b obl) which is described in the Rockfax guide to Cala Gonone.

Another good route in the area of around the same grade isOnda su Onda (6c) , which tackles the wall overlooking the Aguglia and from which the photo above was taken as we climbed it (the wall is in shade in the afternoon).

So, apart from the Aguglia, what are the other gems on this coastline? Now it really starts to get interesting!

Punta Giradili is the 400 m upturned bottle-shaped pillar you can see from the car park of Pedra Longa, at the bottom of the hill from the popular Villaggio Gallico and Creuza de Ma' crags. There is a huge cave to the left of the main pillar. A new route, of about the same difficulty as the routes on the Aguglia, is Parthenia (6b+) , which climbs up to the left of the big cave.

After this, the next route to do isMediterraneo (7a+) which not too long, 240 m, and its 7a+ pitch can be climbed as 6b/A0 to make the route, with the new last two 6c pitches, 6c max 6b obl S2 - topo here. The most popular route, though, isNo match for climb id:"Wolfgang Güllich" , which goes straight up the walls and slabs of the main pillar, with sustained climbing on pockmarks. A strong team can do this in around 8 hours, running together various pitches with 60 m ropes and 19 quickdraws. 390 m, close bolting, the guide says max 7a but 6c+ would be more accurate, 6b obl. S1+

A multi-pitch route has both a maximum and an obligatory grade. While the maximum grade is obvious and is what you can equate to a single-pitch route, the obligatory grade and distance between bolts are actually what you really need to focus on. A high (for you) obligatory grade, and bolts far apart, mean lots of sweaty palms, and the more-familiar E-grades seem more appropriate when the next bolt is several metres above you and the last one several metres below ... and even if you had some wires, there's nowhere to put them!

You can make a rough assessment of the average distance between bolts on a route by dividing the pitch length by the number of quickdraws suggested for the route +1. For example, if there are pitches up to 35m, it says bring only 10 quickdraws, then on average the bolts are 3 metres apart on the longer pitches.

Pietra di Luna gives you further information with an 'S' grade. The 'S' grade indicates the seriousness: S1 means closely-spaced bolts, S2 means the bolts can be well-spaced with harder obligatory moves. Obligatory moves are moves you can't aid, and have to be able to climb to get between the bolts and up the route. SoMediterraneo (7a+) at S2, has the bolts further apart thanNo match for climb id:"Wolfgang Güllich" at S1+.

Pietra di Luna also has a number of little circles (°°°,°°,°) in the description which are used to indicate how well-protected each section is. You may have 7a °°° meaning it is well bolted, and then 6b °° with the two circles indicating more-spaced bolts. Generally, the harder sections of a route will be well-bolted, but the bolts can be further apart (and falling inadvisable if the terrain is slabby) on easier sections, since it is assumed that a leader who can tackle the harder sections won't have problems on the easier sections. All this adds up to the routes feeling much more serious than single-pitch sport climbing, and you should definitely start with easier routes to get used to things.

A couple of lesser-known nearby routes are absolutely brilliant. Abissi is located 500 m south of Cala Goloritzè. 5 pitches, max 7a, 6b+ obl and S1 bolting. It overhangs all the way. Pitch two is fantastic steep 6c+ climbing on tufas and from the stance at the end of it the ropes hang down in space. Abbing back down this is nearly as exciting as climbing it, as you have to place the quickdraws descending and clip the ropes into them as you traverse diagonally and so as not lose contact on the overhangs.

Punta Argennas, opposite Punta Giradili, is much less popular than Giradili, but the routeAutopsia di un Alieno (7b) , 4 pitches between 6c/+ and 7b, has some of the best rock and climbing around. It follows the smooth wall in the centre of the photo, just left of the cleft of Bacu Orrolossi through which you go down to the foot of the route.

Moving up in terms of difficulty, here you find multipitch routes that are world-level testpieces. For years,Hotel Supramonte (8b) in the Gola su Gorroppu was Italy's hardest multi-pitch route, being repeated by Europe's top climbers including the first onsight in 2008 by Adam Ondra. At Punta Giradili,Mezzogiorno di Fuoco (8b) is almost as hard, 8b max 7c obligatory. At Monte Ginnirco, there are several new multi-pitch routes, around S3+ 7a+ obligatory...

Contact Peter for more information on multi-pitch routes at peteranne@peteranne.it.

You can climb all year round in Sardinia, choosing high shady crags in the summer and lower-altitude sunny crags in the winter. The multi-pitch routes are no exception, though, for those by the sea, spring and autumn are the best times, with plenty of daylight, and comfortable but not too-high temperatures . As usual, on the yellow overhanging rock by the sea on the east coast, if there's a sea breeze the rock can be slippery near the water. You get best climbing conditions on this rock with a maestrale NW wind. On the rough limestone of Punta Argennas and Punta Giradili, the friction always seems excellent.

Although many routes can be climbed with a single 60m or 70m rope, I prefer to have two 60m ropes for abseil descents and passing ropes alternately. You can also run together pitches to speed things up (requires up to 20 quickdraws). People often use a single 80m rope. Add some slings, a daisy chain, a belay device, prussiks, and you're set. Helmet according to personal preferences. For the routes mentioned in this article you don't need any trad gear. Sometimes Friends and nuts are welcome though, and, if this is the case, the guidebook description will say so.

Which Guidebook?
The best guide to the multi-pitch routes is the 4th edition of Pietra di Luna. Note that the 5th edition, which should be published in 2011, will contain ONLY single-pitch sports routes, with the exception of the three most popular bolted routes on the Aguglia di Goloritzè. So hang on to (or buy now, it won't be reprinted) your 4th editions. This is available in the UK from many retailers and Cordee.

There are also topos on the folowing web sites: - Topos from sardiniaclimb.com and comments in the database of multipitch routes. - Topos published in UP (whose editor, Maurizio Oviglia, lives in Sardinia and is also the author of Pietra di Luna). • Topos published on www.pietradiluna.com 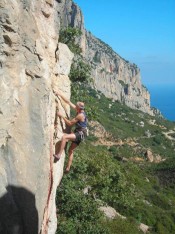 Caroline Ciavaldini and James Pearson are currently on the rock encrusted island of Sardinia, exploring the world of hard...

McClure and Parry tick mega 8b in Sardinia

Steve McClure and Gareth Parry have just returned from Sardinia after making a very impressive, mostly onsight ascent, of the...

New super route by the Danis in Sardinia

After a quick repeat of Hotel Supramonte (hardest pich: 8b) in Sardinia, Dani Andrada and Dani Dulac have moved on to open a...