Share
jcolton 12th March, 2013
This has been read 7,075 times
Share
Is this crag a figment of his imagination, or is insider knowledge holding him back from finding it? Four hundred yards left across the rough, broken cwm with four more lost souls we had picked up and I could sense this leering presence, neck breakingly above. Rain and cloud obscure everything up to a few yards away but I know it is close, very close.

I uncork the wine bottle and pass it round; the others head off for Great Gully which has a surprisingly small amount of water issuing from it. The Main Wall is flinging it down on us as we scramble up to the first pitch. Slanting holds and wet as the first 15 feet warm some different muscles. It's taken two hours to get here from the road. My suspicions about his navigation shelved with the action. Forty feet up to a ledge where a wired Clog secures me to the world and "Come on!" through the wind and splatter. Very wet here, what about two hundred feet above?

Maldwyn climbing slowly and badly, not trusting his feet, warming up. Lead through and leave me the good pitches. This was simple, in Summer, he said.

Twenty minutes to climb thirty five feet; me, cold and dripping. "How is it up there?" The hardest pitch, he said, Crack that and we have it. Up left on small holds and back right on steep ground on big holds and a flake above Maldwyn who passes the gear up. The way forward takes a thin, smooth gangway leading up right to a chimney; left above that to a peg 60 feet above us. Like a boomerang; let's hope I don't end up back here! Commit myself now and it's awkward without crossing my feet; just so with crossing them. Friction on streaming rock, water down the sleeves and neck. Saturated. Reach across out of balance and struggle to insert a nut which I hang on before reaching a jug which is not a jug and I can't move back. A big gust of wind abates and carefully, ever so carefully I effect a delicate weight transfer and reach a hold, incut this time for a foot. Rest. Turn round and grin away the tension; on with a runner and into the chimney. The deluge makes looking up painful; sharp, vertical cracks make pulling up painful. Slide my foot out onto a ledge leftwards and push off with the right hand until more weight is on that left foot. Gingerly, the hand is withdrawn and I'm poised on one foot on a greasy hold. Inch the left hand out to a hold and quit the chimney with the right. Out of the waterfall and twenty five feet left is the peg where the ledge slides off round a nose. Established there with some relief I pull the ropes through and think the worst is over ----.

He comes up slowly; must be cold after that wait. "Slack!" He goes back. Five times. I occasionally see his white face in the gloom and picture myself soloing to get off, or spending a wet, cold night. We manage to flick the runners out and I recall another rope in Maldwyn's sac. Communication is not easy. We'll get off here somehow. You wanted an adventure, get on with it!

Pull the ropes up, thread a tape through the peg and one rope through that. It's awkward, the peg being at foot level. Tie them together and feed them down with my sac for weight in the gale. A steep, airy abseil and he pulls me into the ledge. White faced and shivering, my hypothermic partner inches down to the top of pitch 1. I follow. Try as we can, the ropes refuse to move with the wet and friction, one misses the bottom by about 25 feet. The gully team are retreating too so Maldwyn uses their ropes. I continue on our two, then one, jumping about trying to free them. No luck. Come back tomorrow, early. I empty the water out of my sac and wring my woollen jumper out. In 15 minutes we're assembled for another drink of wine and a bite of salami and down to the Pass and a quick lift to Llanberis and dry clothes. Maldwyn put to bed and his mother, usually so friendly, is quite short with me, after giving him the full benefit of her Welsh tongue that fortunately is beyond me. He is out of the equation for tomorrow; I don't need to be bi-lingual to work that out!

' This was autumn, 1970. A weekend of appalling weather, spent trying to get up Main Wall, Hard severe, 400ft, up on Cyrn Las , above the Llanberis Pass. I was a Fine Art student at Loughborough College of Art, Maldwyn was doing Graphics. He was from Llanberis and he and I with Ian from the Isle of Man hitched here most weekends. The saga continued with my new partner, Pete who was a 'chippie'at the College of Education. This weekend was a Club meet of the U.L.C.M.C. Instead of being frustrated by the all too frequent bad weather I would seek out gems like Main Wall and had some torrid times getting up, and sometimes down. I went back to the Main Wall three more times. Once in 1972 with my girlfriend Sally, in similar conditions, prior to an Alpine trip; with Ian who had his helmet smashed by stonefall, seconds after putting it on (a visit to Bangor hospital) and a solo ascent on a warm summers day in 1978. The wine and salami was probably a by-product of me reading Scrambles Amongst the Alps rather than an early attack of decadence.'

We were at the Wastad layby at 9-30 am. The crag was visible below cloud at 2500ft and not raining, blowing quite a bit though. After 30 minutes we could see the ropes; the crag still dripping with huge wet patches. I took the wrong way to the start and nearly fell off before the climbing proper began and then found pitch one harder than yesterday. Hanging ropes on this forbidding face conveyed an aura of desperation and struggle. What happened here? Someone tried and failed and presumably escaped. It was like a crime scene and the criminal was back. Yesterday seemed like last year.

The third pitch again gave trouble though it was not so wet and we had a view. At the back of my mind, a theory that running water on the rock is better than just damp, not as slippery. I think the man who introduced me to multi pitch routes told me that. He climbed in nailed boots so I think the weather was irrelevant to him. I had a pair of Richard Stanley's Bryn boots on, still wet from yesterday. Pete also found it hard and we assembled at the peg and sorted the ropes out. The delicious tension of uncertainty still strong as above was a new world for both of us. The next pitch was remarkably hard, greasy and unprotected. With much relief I fixed a good wire in opposition to a tape in the dihedral above. Three pitches left and doubt crept in about yesterday; this would have tested me severely even though I'd climbed the crux, according to the Guidebook. The way on from this haven is tremendously exposed. The wind yesterday was bowling people over on the railway track above. Today was still bad, the rock and I became cold much quicker but there was no need for retreat, Pete climbing very well.

A long pitch, most of it out of Pete's sight. Reluctance to quit a pinnacle and then a cave above. Good holds higher up on the arête and out left again to some grass and jammed blocks. After 25 minutes poised above 500ft of air I was glad to reach a ledge. Patience and warmth quickly escaped me as Pete seemed not to respond to some strong pulls on the rope. I didn't want to pull him off this long rising traverse nor did I want the rope round his feet. All the time working out how to extricate us from here but no need, he's on his way.

He had a well earned rest before I moved up over dubious ground to the base of a big slab overlooking Great Gully. This gave a great pitch but it's above the continuously steep ground and the uncertainty was gone; just enjoyable movement. Specks on Crib Goch could be the others. Pete came up in fine style, outlined against the gulf below.

The wine and soggy salami were devoured in celebration and hunger and then the slog up to the railway line. Was there time for a route on Cloggy? He looked at me seriously for a couple of seconds. 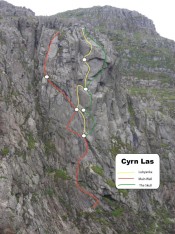 Caralynh
12 Mar, 2013
Brilliant. I climbed this a few years ago in torrential rain and storms. Sounds very familiar!
Sean Kelly
12 Mar, 2013
I am sure that I too climbed this in 1970 but had much better conditions.
Add Comment
Loading Notifications...
Facebook Twitter Copy Email LinkedIn Pinterest