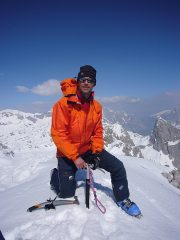 Dave12th November, 2012
This has been read 10,459 times
Last week and this, photographer Dave Smith has scooped the coveted 'Photo of the Week' slot on UKClimbing with his stunning images of a recent trip to Antarctica. Here at UKC we dropped him a line to find out more about his expedition, and also to look at more of his stunning photography. In this article Dave gives us a run down of the expedition, and showcases some of his beautiful shots lower down the page. Thanks Dave! The Eagle Ski Club, with leader Phil Wickens, organised an expedition to the mountains of the Antarctic Peninsula in January 2012 to explore, climb and ski. The only way to get there is by boat, most commonly a sailing boat from Ushuaia in Tierra del Fuego, and the team of eight joined the yacht Spirit of Sydney skippered by Cath Hew and Darrel Day, a pair of remarkable Australian sailors, climbers, skiers, chefs, boat builders, comedians and story tellers. The three to four day crossing of the notoriously stormy Drake Passage between South America and Antarctica took its toll on many of us but the desire to be allowed to die (of seasickness) soon dissipated as the mountains of the Peninsula hove into sight. Due to it being a heavy ice year we were unable to get to our original destination further South and were instead landed on a desolate rocky beach on Anvers Island with a week's worth of food. Towing drybag pulks over the icecap, a simple and effective way of moving a lot of gear in this sort of terrain, we made intermittent progress over the next four days in poor weather and frequent whiteouts to the base of Mt Agamemnon (2570m), which has possibly had only one previous ascent and neighbours the higher Mt Francais, some 3km away and at 2760m one of the highest mountains on the Peninsula. It has had several ascents. A weather window suddenly opened up one evening triggering a frantic burst of activity to get out and make the most of it. As we gained height on Agamemnon the views opening out over the icecap and sea beyond to the mountains of the Peninsula in the setting sun were magnificent. At one or two steeper places the skis came off and crampons on before reaching the flat and spectacularly corniced summit at dawn after a 1700m vertical, seven hour ascent. It was bitterly cold and the cloud was moving in again so we didn't hang about before enjoying a great ski down in good snow. Bad weather rapidly resumed and we retreated to the coast for a pickup by the yacht called in on our sat phone. We had had about twelve hours good weather in seven days on Anvers Island. A few days of R and R in the aptly named Paradise Bay area followed whilst we sat out some bad weather; kayaking, eating, drinking and photographing wildlife, plus an excursion on Bruce Island where David was captured skiing off the spectacular summit. We then moved further North up the Peninsula, where the satellite weather photos we could download were showing clear weather, and were landed with ten days of food in Cierva Cove to explore a group of unclimbed mountains around the Breguet and Sikorsky glaciers. Establishing a base camp at around 450m we made a number of first ascents of summits between 1100 and 2200m in the F-AD range including the only two peaks with names in this area, Mt Cornu and Mt Ader. The glaciation was of course very heavy and the fantastic accumulations of Patagonian-style bottomless rime ice on some summits made for a challenging ascent of Spirit Peak, where Toby shoveled a vertical trench into a steep rime wall and climbed it using a snow stake for purchase as ice axes were useless. We made what are believed to be eight first ascents in this area.

The return trip avoided most of the 'Drake shake' until Cape Horn, which gave us a little taste of what it can offer the sailor. For me, as a sailor myself, seeing the lighthouse on Cape Horn coming into view in the early morning gloom of a windswept Southern Ocean as we crashed our way North to find shelter in Chile was a fitting end to the trip.

We enjoyed generally moderate temperatures, mixed weather but with some long settled clear spells and generally good snow conditions from powder to crust. The boundless possibilities for skiing, exploring and climbing, wildlife viewing and kayaking in an area where very few people ever get to go means you somehow know that you need to go back.

A full report can be found in PDF format here: philwickens.co.uk

Tom Briggs
12 Nov, 2012
Fantastic photos!
JH74
12 Nov, 2012
Fantastic stuff. Really amazing. I wonder how much it cost to do it..?
Tom Last
12 Nov, 2012
Yeah I wondered the same. Dave, how much did the charter run to and how much per person to get out to Tierra Del Fuego, if you don't mind me asking?
Jon Griffith
12 Nov, 2012
That shot of climbing Mt Agamemnon at sunset is really incredible
hexcentric
12 Nov, 2012
It would be great if someone could run a 'how to' article on trips to somewhere like this so others could get a rough idea of costings etc. I'd also love to see one for Alaska. Mr Griffith, Im looking at you here!
More Comments
Add Comment