Canoeing and Climbing in the Cirque of the Unclimbables Article

Jacob Cook recounts his summer adventures combining canoeing and climbing in Canada with his girlfriend Bronwyn and her family; an unconventional family holiday of special significance...

I had always been a bit sceptical about the inflatable canoes, but it wasn’t until we began strapping all thirteen packs and four barrels into our strange “blue banana boats” that the full reality began to set in. The van dropping us off had left in a cloud of dust, leaving only the sound of the river. Over a hundred miles of dirt road lay between us and the nearest highway. The only way out now was down-river…on the banana boats.

Bronwyn Hodgins and I had been planning this trip for two years, from figuring out if it was actually possible, down to cooking and dehydrating the enormous quantity of food required by seven people for thirty days. In many ways it was a dream trip, combining Bron’s skills at white water canoeing with our big wall experience from Yosemite.

Our plan was to canoe the Little Nahanni and Nahanni rivers, a twenty-day white-water trip that would bring us within striking distance of the Cirque of the Unclimbables, home to the Lotus Flower Tower. Once there our mission was simple:

“Get Bron’s dad Geoff to the top of the Tower”!

This was not Geoff’s first time down the river. He had paddled the Little Nahanni for the first time with Bron’s mum in 1980. They were seventeen years old. On that trip they hiked from the river to marvel at the Cirque's sheer walls. Now 36 years later, Geoff was coming down the river again, this time with two of his children and this time to climb the Tower!

The rest of the team consisted of Bron’s younger brother Alex, Thor Mountainside, Zack Goldberg-Poch and Ant Southam, who had also been on Geoff's trip in 1980, also aged seventeen.

Stunted northern trees lined the banks of the Little Nahanni, clinging to existence on the edge of the Northern tree line. Coming from the 21st century urban landscape of the UK, I found it difficult to comprehend the vast scale of the wilderness in Northern Canada. In the distance the snowy peaks of the Ragged Range drew my eyes up towards the horizon; a horizon that the sun wouldn’t dip below for the next month. I knew that the Lotus Flower Tower lay just behind those peaks, and I was anxious to get down-river and climb it whilst the good weather lasted.

I didn’t have long to marvel at the landscape as quickly the Little Nahanni started dropping and raging. I knew that on Geoff’s previous trips he had carried his boat around Crooked Canyon, but this time he hoped to run it. As we accelerated into the canyon I felt fear of a different kind to what I am used to when climbing. Everything was happening very fast; over the roar of the water I could hear Bron yelling commands at me from the back of our tandem canoe. We hit an eddy we had spotted from above and waited for the other boats. From here we’d be able to scout the next section and decide what to do.

Alex and Zack came barrelling around the corner paddling hard, but they were too far over. We watched unable to help, as they flew past us and into the even more furiously pounding white water ahead. I saw Zack and the front half of the canoe being tossed high in the air, before disappearing out of sight around the corner. A tense moment passed in the eddy. “Dad, should I go after them?” asked Bron. Off we went, unscouted (“onsight!”) into some of the biggest rapids on the river. It was the most I could do to stay in the boat as we bounced and rolled over standing waves breaking well over my head. Amazingly no one tipped, thanks largely to the skilled paddlers on our team and the amazingly stable banana boats, SOAR canoes, they had proven their worth!

Each night we camped on the banks of the river, setting up our bug tent to shelter from the evening swarms of mosquitos. After a week on the river we pulled up by Britnell Creek, packed our bags for ten days in the Cirque and hung the rest of our food and equipment from trees. “Out of reach from grizzly bears,” we hoped.

After a day of backbreaking hiking we found ourselves paddling across Glacier Lake into the sunset and towards the Cirque of the Unclimbables. The view of towers upon towers of vertical granite set my climber's heart racing!

Marmots played amongst the wild flowers that surrounded our base camp in Fairy Meadows. The lushness contrasted sharply with the alpine towers rising thousands of feet above us in every direction. The plan was to try the Lotus Flower Tower over two days, as a team of four. I would lead trailing three ropes and Bron, Geoff and Thor would follow with a combination of climbing and jumarring. I wondered if bringing Bron’s dad up a remote wilderness big wall as his second multi-pitch climb ever was perhaps a bit optimistic?

As we started the climb I was amazed at how relaxed Geoff seemed, taking exposure, hanging belays and rope tangles comfortably in his stride. More importantly, he seemed to be genuinely enjoying himself, grinning from ear to ear. It was clear where Bron got her aptitude for big walling from!

As we climbed clouds swirled around the tower above us. The wind was blowing directly over the top of the tower, meaning that incoming weather was hidden until it was literally on top of us. I was starting up the fifth pitch when it began to rain and it quickly became torrential. I was only thirty feet away but I could only barely make out the other three in their bright orange raincoats. I retreated back to the hanging belay, where we fished out our tent fly and wrapped it around the four of us. We hung there for half an hour. It felt oddly claustrophobic cocooned inside the orange fly, given our outrageously exposed position. Amazingly spirits remained high, and everyone seemed keen to wait for a lull in the rain and press on. Finally, with a tiny patch of blue sky above us, I lead on up some now soaking wet chimney pitches. That night we melted snow for tea whilst the four of us huddled inside our three-man tent at the bivvy ledge.

The next morning we awoke to our alarm at 6am and were greeted by the sound of heavy rain, I felt the orange fabric of the tent pressed into my face. It took me a second to realise that the tent was collapsed under weight of snow from during the night! Luckily we’d brought the cards, so we settled down to a game of euchre in the tent. It felt oddly like a childhood family camping trip, except our position halfway up the Tower gave it a rather unusual twist!

Later that day we decided to push for the top. It continued raining intermittently but I found that by climbing carefully and deliberately I could comfortably lead the splitter upper cracks even in the wet. Thor was singing “jugging in the rain” as he cleaned pitches!

As Geoff reached the last belay Bron gave him a huge hug, they were both smiling. The rain had stopped and it was oddly calm on the summit. Despite knowing we had a huge descent in front of us, we sat for a while and drank in the view. Endless snowy peaks stretched away into the distance, bathed in orange light from the sun now low in the sky. On the other side we could see the Nahanni snaking off into the distance; our highway in and out of there.

The weather allowed Bron and I one more day of climbing in the Cirque. Whilst the rest of the team hiked and played on the boulders around camp, we went questing up Riders on the Storm, a long 12d/E6 on East Huey Spire. The crux pitch was a gently overhanging splitter finger crack on perfect granite. It felt like cheating to be climbing Yosemite style cracks in a beautiful location with not another person in sight.

It took another two weeks to paddle out down the Nahanni to Blackstone Landing, the first road access to the river in over 500km. At Virgina Falls Bron’s mum and Zack's dad flew in to join us for the remaining 9-day paddle, perhaps an unusual choice for a family holiday! After my terror on the Little Nahanni and the excitement of the Cirque, it felt relaxing to be floating down the wide river in our inflatable blue convoy. We passed riverside hot springs, wild bison and huge, Verdon-esque limestone canyons.

Most of all it felt great to have given Geoff an experience that obviously meant a lot to him. So often as climbers we get obsessively focused on individual goals or summits, this time it was fun to work towards and achieve something that wasn’t purely a personal challenge. In turn I felt grateful to Bron and her family for getting me down the river safely; there’s no way I could have done it alone. I even conceded that maybe I’d go on a canoe trip that didn’t involve any climbing!

The team would like to thank Rab for their kit provisions for the trip. 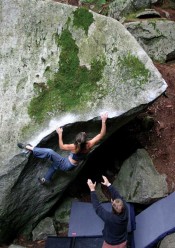 Bronwyn is a professional rock climber and guide, based in Squamish, Canada. Originally from rural Ontario, Bronwyn grew up canoeing, hiking and skiing with her family. In just eight years, she has climbed 8a+ sport and...

Zoomer
7 Sep, 2016
Awesome!!! Always wanted to paddle the Nahanni and then do the Tower, time to get planning!
Josh Willett
7 Sep, 2016
In reply to UKC Articles Brilliant!!!
WildCamper
7 Sep, 2016
Living the dream man! Good write up
ChrisBrooke
7 Sep, 2016
What a great trip. That sounds like a fantastic few weeks of adventure and fun. [without wanting to trivialise the adventure, the best bit for me: Thor Mountainside! Best climber's name in the world!!]
3leggeddog
7 Sep, 2016
A great adventure but come on... Thor Mountainside... Really....
More Comments
Add Comment
Loading Notifications...
Facebook Twitter Copy Email LinkedIn Pinterest