Share
Ron Kenyon 30th April, 2014
This has been read 6,648 times
Share
On 20th April 1914 “The Flake” on the Central Buttress of Scafell was climbed by Siegfried Herford, George Sansom and Cecil (commonly known as Charles) Holland to provide the link for a complete ascent of the buttress – this was completed on 22nd April. The ascent of Central Buttress, or more often known as CB, was a major achievement and one of a succession of such events in the history of British rock climbing. The centenary of this was celebrated by a special weekend meet (Easter weekend) of the Fell & Rock Climbing Club (FRCC) at Brackenclose. As part of the weekend there was also the launch of the new rock climbing guide to Scafell and Wasdale produced by the FRCC.

There was snow around the base of the crag and especially in Lord's Rake which was similar to conditions 100 years earlier as shown by a photograph of Herford, sitting atop of The Flake, which shows a sizeable patch of snow at the base of the crag. The crag faces north and with the low temperature, warm clothing and a gritty determination no doubt was and still is necessary. Originally there was a jammed block in the flake which was used to aid the original ascent with Sansom tying himself to the block and Herford using the block and Sansom in his ascent – a very precarious activity. The block dropped out 20 years ago, sadly with a fatal consequence. Ascents can now either be made of The Flake, without the block, which is somewhat harder (E3), or by the face to the left, which is now the more normal route (E1).

The focus of the weekend was Sunday 20th April when climbers were to make ascents of CB. Nick Wharton led off with Steve Scott and made a steady lead of the face to the left of The Flake. Al Phizacklea with his “mucker” John Holden came next, then John Lynch, Tommy Moore, Joe Holden and Dave Woods. It was cold with some damp patches and there was some rain for a short period. The ascent was filmed and also captured by the Abraham’s Camera as well as being watch by people around Hollow Stones, the valley below, including Peter Moffatt (age 89) and Ron Miller (age 86) and Kit Braumholtz (age 85 – nephew of Herford).

Later the Abraham's Camera was used to take and recreate a photograph of a group standing on the bridge behind the Wasdale Head Inn. The original taken in 1893 was not an Abraham’s photograph. The setting up of the camera created much interest from those assembled for the photograph.
Later in the afternoon there was a gathering of everyone at the FRCC hut at Brackenclose, close to the path up to Scafell. The climbers assembled there ranged from Peter Moffatt and John Wilkinson who climbed CB in 1940’s through to the latest generation of climbers including Craig Matheson, who with his father Rob (FA Shere Khan, E5, in 1977), had been checking out a new route on East Buttress, during the day. Others included Johnny Adams, who was on the first ascent of Lord of the Rings (E2 - traverse of East Buttress), and Paul Ross, who had been active on the crag since the 1960’s. Pete Botterill was looking the hut book which recorded his ascent, with Jeff Lamb, of Zeus, E3, in 1974 – the first of a number of first ascents on Scafell that he was involved with. Al Phizacklea and John Holden returned, after their ascent of The Flake, somewhat warm after having had a good look at a potential new route on the Shamrock area. Adam Hocking mentioned plans for 2014 with potential new routes and repeats of Dave Birkett routes. Dave Birkett was not able to be there. Past guidebook writers – Ron Miller, Bill Young and Mike Burbage – reminisced about routes and Scafell. On the Friday Ron Kenyon and Mike Cocker had climbed the route of Centenary Slab, E1, near Pikes Crag opposite CB, named to celebrate the centenary of the FRCC, and then climbed a new route nearby, at a more lowly grade - CB Centenary, Severe.

At 6.00pm the throng gathered outside the Hut for various speeches. Ron Kenyon (FRCC Guidebook Secretary) made the introduction then John Barrett (FRCC President) spoke about the ascent of CB and the first ascentionists. Siegfried Herford was one of top of climbers of the time but sadly he was killed, along with many others in World War 1. George Sansom served at the front but went on to live until he was 91 with a full life that included being a pioneer in the use of colour and stereo photography as well as inventing a bird scarer. Craig Matheson then read, from the original Wasdale Climbing Book kept at the Hotel, the record of the ascent of CB written 100 years ago which helped to carry all back to that time. Kit and Ted Braunholtz, who are nephews of Siegfried Herford, then spoke to help with that link to their uncle and his climbing pals. Al Phizacklea, who wrote the new and previous two guides and also a prolific developer of new routes on Scafell then enlightened all in his usual way.

CB was huge step forward in climbing 100 years ago but climbers are still developing new routes on Scafell with many at a level unthought of 100 years ago. CB is still a challenge for climbers and the new guidebook will help to guide climbers up it and other routes in the area. 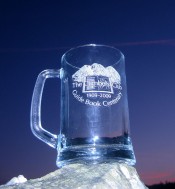 The Climbers' Club Guidebook Centenary - A Mighty Fine Do

johncoxmysteriously
30 Apr, 2014
Is that UKC's own John Wilkinson (jcw)? He can't really have done CB in the 1940's, can he? John?? Wonder if any of Mabel Barker's relatives were there. Wish I had been; sounds like a great event. jcm
Stephen Reid - Needle Sports
30 Apr, 2014
Peter Moffat - standing on the very left of the first photo in the article - told me he had first climbed it in 1939!
johncoxmysteriously
30 Apr, 2014
Good grief - how old is he?! jcm
Hardonicus
1 May, 2014
89 according to the article so he must have been 14!
Ron Kenyon
1 May, 2014
Would be believable with Peter - quietly gets on and does things. Interesting collection and age range of folk - 4 for the ascentionists of CB on the centenary were under 30 - shows climbing embraces all ages.
Add Comment
Loading Notifications...
Facebook Twitter Copy Email LinkedIn Pinterest