Share
Jack Geldard 16th November, 2010
This has been read 10,764 times
Share
This is part of a series of profiles of speakers at this year's Kendal Mountain Festival. For more information on how to book tickets and who else is speaking at the festival see the info box below.

HOW TO BOOK TICKETS

Easily accessible from the M6 and by train and there are plenty of accommodation options in and around the town but you need to be on your toes as they fill up very quickly over the Mountain Festival weekend.

For all your questions, accommodation and travel needs go to www.golakes.co.uk here you will find all the information you should need for your visit to Cumbria, alternatively call the accommodation booking line on 0845 450 1199.

On 24th May 2010, Mike 'Twid' Turner, Stuart McAleese and Mark Thomas made the first ascent of a previously unnamed peak and Big Wall on Baffin Island.

Stuart is lecturing about his epic ascent of the new route 'Arctic Monkeys' at this year's Kendal Mountain Festival.

UKC caught up with Stuart to find out more about his climb:

Where did you go in Baffin exactly?

We climbed in the Stewart Valley on the east coast of Baffin Island. This climbing area is north of a small outpost called Clyde River, which has a population of around 300. This was our last form of civilisation, it has an airstrip and a couple of food stores.

To get to the Stewart Valley from Clyde River we took skiddos over frozen fjords, winter plateau and moraine for nine hours.

Why did you go there?

Everyone has heard of Baffin Island for its amazing big wall climbing and when I was shown a picture of the walls in the Stewart Valley, it just looked superb, totally hardcore! I had to go! When discovered for its big wall climbing potential it was described as the 'Arctic Yosemite'.

It just sounded like a complete adventure, a chance of a lifetime, one of those trips that you just couldn't say no to. As predicted it turned out to be one of the most challenging and rewarding experiences ever.

You did a new route - are there many existing routes there or is it virgin?

There is tonnes of amazing climbing in Baffin, as you can see from the brand new guidebook recently brought out. However, the place is totally out there! Huge walls and often in a serious location. The routes come in all shapes and sizes but most are massive, probably aid climbing and rarely if ever been repeated.

The area we climbed, in the Stewart Valley, has some of the best rock and biggest walls on Baffin Island. There are a handful of existing routes, but we're talking about a single valley that is compared with Yosemite! There's loads of potential, still unclimbed big walls and peaks, if you're willing to suffer a little.

The route - how hard was it and how long did it take?

The line of Arctic Monkeys was the first thing I looked up at when I got off the skiddo at base camp. A golden pillar of granite with a strong corner groove-crack which seemed to climb the entire pillar to the summit.

Due to the conditions we were forced to climb wearing everything - including gloves and plastic boots. Most of the climbing was steady but involved clean aid, with the wall being vertical or overhanging most of the way. However we did hit some hard sections when we were forced out on to walls which led to some insecure hard aid.

With living conditions tough and the nature of the climbing we could only average two pitches a day, with eight pitches on the summit day in a 24 hour push. The route consisted of 300m of snow/ice/mixed climbing at the base and 1100m of rock with the total length being 1400m.

The route took 21 days to climb, with 18 consecutive nights living on the wall in portaledges. In the end we graded the route VI A4 - 1400m.

Climbing with Mark and Twid- What are they like?

I wouldn't have wanted to be out there with anyone else! A team of three was ace but also really important in such a serious place.

The guys were awesome, we all had to dig deep every day right to the bitter end with an epic 25km walk out over dangerous unfrozen fjords in polar bear territory. All three of us had climbed together and we are all British Mountain Guides. I have climbed with Twid for the last 10 years on numerous expeditions and he is the man when it comes to adventurous Big Wall climbing.

Twid is a great friend and amazing on a big trip, a world class climber with tonnes of experience of being in big, gnarly places.  Mark is a complete climbing legend, his years of Arctic experience were really useful. We shared a portaledge for 18 nights which takes some doing! You really look out for each other in a place like that and both Twid and Mark were an inspiration to me when things got tough.

What kit did you use on the wall? Clothes, Tents, Aid gear?

The normal for your average winter big wall epic, loads of everything!

We wore the same clothes for 21 days, with no real place to change and no need, we just didn't. The only thing I did change was my socks each day and bedtime. I had 2 pairs, one which I climbed in and the other I slept in, to help keep dry. I say bedtime because there was no night, only 24 hour daytime. We wore lots of down and synthetic clothing even when climbing, and most of the time when belaying you were forced to go double duvet!

Sleeping was easy, we had two big portaledges and huge synthetic sleeping bags each. On the wall with us was a total of 6 haul bags, 2 each containing food, fuel, stove and climbing equipment. The climbing involved the use of every piece of aid equipment going, we even nicknamed a pitch high on the face 'birdbeaks for breakfast' A4.

Some of the best pieces of kit we used were the DMM Dragon cams and our bombproof portaledge fly-sheets, these things were amazing and had to withstand some tough weather including the odd spindrift avalanche! My luxury item of gear was my itouch, which helped me to sleep whenever I had the chance.

Would it be a viable place for free climbing?

If you had the weather and conditions on your side it would be awesome. Nearly all the routes in the Stewart Valley are aid routes. It was our intention where ever possible to free climb, but due to the consistently cold temps and the nature of the climbing we were forced to aid climb. Climbing there in summer would be the answer, however, you would have to put up with a slower/ more involved approach of sailing and I have heard the mosquito can be pretty awful that time of year.

Saying that, May seems to be the time of year to go this amazing part of Baffin Island.

Arctic Monkeys would make an amazing free route, we chose a strong line containing good cracks, solid walls, corners and grooves with minimal off width chimneys! Most of the steady clean aid cracks and corners we climbed would go at E3/4, bits just like Astroman! However the harder A4 sections would be pretty tough free climbing, but would be totally out there!

Would you go back?

Climbing in Baffin Island felt really special, and one of the toughest most out there places ever. The expedition required complete commitment and every last bit of effort, physical and mental. Baffin Island has some of the biggest and most photogenic walls and mountains on the planet. Combined with the vast Arctic backdrop and the contrast between the frozen fjords and the massive vertical walls rising out of them, the landscape is truly outstanding. I can imagine that it would be a pretty tough place to visit year on year purely because of the effort and expense involved. However, I've never been good at saying no, so to answer your question...yes, of course.

Funny you should ask, I have just come off the phone with friends chatting about Alaska. Love the place, nice people and really cool mountains. I always want to head back to Patagonia, given the chance I'd go any time. I just love adventures, in big wild places.

Whats the best route you have ever done?

Arctic Monkeys- winter big wall epic adventure and Little Chamonix in Borrowdale - because it was my first!

Thanks Stu and good luck with the next expedition - wherever it may be.

The expedition was sponsored by Comvergent, Lyon Equipment , DMM , Mountain Equipment and received grants from the Mount Everest Foundation, the BMC and the Mark Clifford Grant. 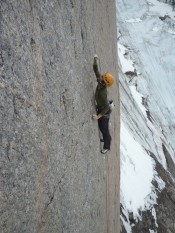