Meeting Alex Luger - One of Austria's Top All Round Climbers

Every so often you meet someone in climbing that makes you take a step back. Someone with a fire in their eye, passion in their belly and a deeper connection with the sport that we all love. In 2013 I met Alex Luger.

On a flat-grey morning in Llanberis, in a puddle printed car park, a large man strode over to me and thrust out a bear-sized paw.

"Hallo. I am Alex Luger." he boomed, in a deep, Arnold Schwarzengger-esque voice. "Shit, he's massive." I thought as he crushed my hand to a pulp. "Lets go climbing." he said, dead pan, as he released me from the iron grip. I gulped and we got in the van, aiming for Anglesey.

I feel very close to nature, I think we are still very connected to it. I feel peace and satisfaction out there. For me climbing, being outdoors, feeling the power and the pulse of nature is reality. Facebook doesn't feel real to me, climbing into a storm feels real, safety and danger is real and that's something very fundamental. Having the chance as a human being to expose myself to feel the outcomes of the decisions me and my climbing partner have taken is more natural, more human than posting daily emotions on social media for virtual love.

26 year old Luger is a traditional kind of guy. He grew up in the town of Hohenems, Austria, and still lives just 5 miles from his family home. Born in to a climbing family, he wore a harness whilst still in nappies, but it wasn't until the age of eleven, on a family climbing trip to the Verdon Gorge in France, that he began to fully connect with the sport that was to feature so strongly in his life.

"It felt natural to be there in the Verdon," explained Alex, "simply climbing made me happy and satisfied."

Alex's work has been varied, but mostly with a practical theme. From ski instructing in the winter through to construction work in the summer, he's worked hard to fund his climbing and his degree. Luger studied Sports Science at the University of Innsbruck, Austria, a city known for its high density of climbers and even higher climbing level.

"I started my studies in 2008 and lived in Innsbruck that time. Innsbruck is really a hotspot or better hotpot for strong and motivated climbers. The cool thing about Innsbruck is that everyday there's someone who wants to go climbing, so there 's no lack of climbing partners."

For many Innsbruck is a climber's dream; the small, mountain-flanked city is surrounded by climbing, skiing and mountain biking and there is, as Alex said, a thriving climbing scene. With the superb Zillertal sport climbing less than an hour away, Luger enjoyed his stay in Innsbruck, but the draw of his home crags, and his girlfriend, took him back home.

These days Luger lives in Dornbirn, around two hours west of Innsbruck, and he makes his living through working as an assistant to a photographer, and he loves the local cragging as much as ever.

"From Innsbruck you need to drive 45 minutes to get to great climbing like the Zillertal, whereas in Vorarlberg most of the sport crags are closer and quicker to get to, but we don't have nice granite here, so mixing it up between the areas is the best idea. The biggest difference if you compare Innsbruck to Vorarlberg is the ratio of people to rock; the small amount of climbers to the huge amount of crags we have here in Vorarlberg."

As well as the actual climbing, Alex feels connected to his local climbing community.

"When I first started climbing it was the fun factor that really appealed, as well the competition, I always wanted to be as strong as my dad and his friends. Climbing has changed for me now, I hope. Climbing is art, it's expression, a hobby and a sport, it's a whole way of living."

It's clear that Alex has fulfilled his common boyhood ambition of becoming as strong as his father, his incredible ticklist of climbs - from 8b+ traditional routes with huge run-outs through to WI6+ ice climbs and 8c+ sport routes - lands Luger in the top 0.1% of climbers operating in the world today. Known for his hard new routes with minimal gear and no bolts, Luger puts this bold style down to his upbringing.

"I still feel very privileged to have grown up in a climbing community with values and respect for the history of our region. Very early in my climbing career I was in touch with ethics and saw lots of different motivations for why people climb. My way of climbing has been influenced by my surroundings, both the physical landscape and the people."

When asked to list the climbing achievements that he is most proud of, two come top of Alex's list. The first being the 7 pitch new route Sangre de Toro, an 8b+ trad and bolt hybrid climb at the Rote Wand, Lechquellengebirge.

"So the Rote Wand is in the Lechquellengebirge and the nearest town is Zug / Lech in Austria [Eds note: this is the well known ski area of Arlberg]. It's a really interesting mountain for climbers especially the south face. It's 400 metres high and it's steep with high quality limestone." explained Alex, adding with a laugh;  "Except the top pitches where you have to climb on loose slate or some kind of weird mudstone."

"The climbing history of the wall is special too because most of the routes have been put up free and with minimal in situ gear. So the routes follow natural features like cracks and corners which take generally good protection. In the 80's free climbing here was pushed up to the 8th grade without bolts.

"I prefer doing my first ascents ground-up and free. Only when I am drilling a bolt do I use a hook or a pecker to hang on whilst I pull up the power drill. I try to find the easiest and most logical way through the wall and that means if there is a way to protect it with cams or nuts I do, but in the high difficulties you have to be very lucky to find enough natural protection. I don't like creating death routes but it can happen that I climb dangerous run-outs in the hope that I will find some protection. In such situations I go back and place a bolt afterwards. So, I drill a bolt if there is no other possibility, but for me personally the best style is natural protection.

"For me Sangre de Toro is a king line and a personal highlight. It's a very logical line following cracks and corners up through the steepest part of the Rote Wand. It's got a cool crux pitch that feels like climbing at Ceüse - but on an alpine wall!"

A small roadside crag from Alex's home area has been in the media spotlight over the last few years, due to one of its most famous sport routes being reclimbed without bolts (UKC News) and this is the clean sweep of slab in the village or Burs; the Burser Platte. It's here that Alex has pushed his technical slab climbing, and the Burser Platte is the home of the second route on Alex's list of achievements.

After repeating the original 8b/+ (E10) slab of Prinzipp Hoffnung, Alex realised that there was another, more complex line on the same wall.

"I was attracted to this line by the combination of hard, technical face climbing and natural gear. Mentally and physically I pushed myself a lot and the result was the first ascent of Psychogramm (8b+, no bolts). The line follows a seam/crack that runs out on the crux moves. The protection is spicy and the climbing insecure. At the beginning of checking the route I could climb the crux on top rope only once out of ten tries. I had hoped it would be the opposite - 9 out of 10 tries! - because the protection is on the borderline of what will hold a fall. After some more sessions on top rope and after finding slightly better gear placements I was, in the end, able to lead it."

This video is blocked because you have disabled Social Media cookies
Please enable them to view the content
That Welsh afternoon Alex racked-up at the base of the Rhoscolyn classic E6 Dreams and Screams. "Do you have any tips for me before I go?" he asked, again sounding like The Terminator. Slightly nervous about replying, I suggested he take some big wires, as I had spotted he only had small ones and some larger cams, and I knew that this type of rock eats big bomber wires everywhere.

"I don't use big wires so much where I am from, we generally use cams." he said, adding "But if you think I should take them, then I will." he smiled and clipped some Wallnut 10s to his harness.

High up on the pitch and the difficulties started to kick in. Luger's climbing pace changed. He sped up and moved with a determined force. At one point he let out a primeval roar as he pulled hard on some powerful sidepulls.

The route didn't stand a chance, and the Austrian power-house topped out in to the strong coastal wind, and belayed me up behind him.

At the top we both revelled in the moves and the steepness. What a route. "Thank you for suggesting I take some big nuts." he said, gratefully, looking me straight in the eyes. "It's always good to learn from local climbers." He threw his arm around me in celebration of our climb, nearly breaking all my ribs in the process, and we laughed about how pumped I had got taking the bloody wires out!

"I love climbing and find it's a good way to express my values, to develop as a person and to have fun with friends." 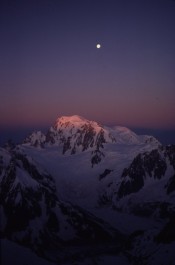 Rob Greenwood - UKClimbing
3 Oct, 2014
Alex does leave something of an impression that's for sure. I took him to Craig Doris last year and sent him up the 'classic' E3 - Cripple Creek. He loved it, but that said, he seems to love everything when it comes to climbing: easy/hard, loose/solid, sea/mountain. Whilst in Wales he just wanted to be shown fun stuff to do, he didn't really seem to mind what it was. Quite a refreshing approach...and yes...an uncanny vocal resemblance to the Terminator...
Jus
3 Oct, 2014
I love the video of him Psychogramm
Franco Cookson
3 Oct, 2014
Great article, really well written. Dornbirn ist aber westlich von IBK. Also, how much does he look like Alex roddie Ray's photo!
malk
22 Oct, 2014
Only a Hill on steroids..
Add Comment
Loading Notifications...
Facebook Twitter Copy Email LinkedIn Pinterest