Classic enchainments of Routes in Snowdonia 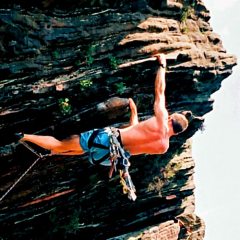 The idea of linking climbs together has been around for many years. The technical term is an 'enchainment' but at a more basic level, linking routes together is just an obvious and fun way of having a great mountaineering day out. As far back as 1958, J.E.B. Wright in his book Rock Climbing in Britain lists enchainments throughout the UK and several in North Wales similar to those described here. Probably the most common enchainment is that of routes in Cwm Idwal. Thousands of climbers over the decades have linked routes on Idwal Slabs, Holly Tree Wall and the Continuation Wall.

As part of my fitness training for my adventures this Summer I took advantage of the amazing weather this April in North Wales and armed with the superb new Ground Up selected guidebook, North Wales Rock, I had couple of great days out moving fast and light. Listed below are two superb enchainments based on the ones I completed. Classic enchainments starting in Cwm Idwal are also described along with an option based on combining elements of the others. Whilst these combinations are pretty obvious, I hope this article may remind people of their potential as both superb days out in there own right but also as perfect training for trips to the Alps or Dolomites.

1. South Side of Llanberis Pass

(Grades: HS minimum, VS as described)

Piers Harley on the final move The Cracks
© Paul Winder

Llanberis Pass offers one of the best enchainments in Britain, with routes finishing on the summit of Crib Goch, Crib y Ddysgl or with a short walk, Snowdon itself. The main event undoubtedly needs to be an ascent of Main Wall on Diffwys Ddu (Cyrn Las), probably the finest mountain route of its grade in North Wales. For the keenest climbers, an ascent of Dinas Mot by The Cracks (or The Direct Route) and then Slow Ledge Route gives a perfect lead into Main Wall. Following Main Wall there is a choice of excellent routes on Clogwyn y Ddysgl and then the impressive Reade's Route on Crib Goch makes a perfect finale either with or without a detour to the summit of Snowdon.

Variations:
For a shorter day, either the first two or the last route can be omitted. The Direct Route (VS 5b) on Dinas Mot provides a harder alternative to The Cracks, and there are good variations on Clogwyn y Ddysgl. If Gambit Climb is busy, Rectory Chimney (VD) is a worthy replacement. The other alternatives are the easier Parson's Nose (Diff), providing 3 pitches of climbing followed by a fun scramble up the main arete or Fallen Block Climb (VS 4c) that maintains the standard at HS/VS. For the fastest and keenest parties, the addition of a route on Clogwyn Du'r Arddu or Lliwedd is a feasible option and would give an extremely challenging and rewarding day out.

Alex on Grooved Arete, moving onto the arete on pitch four
© nick simons, Apr 2007
The finest mountaineering route in Ogwen Valley is probably Grooved Arete on the East Face of Tryfan. With a bit of walking this can provide the basis of a fine enchainment via Cwm Cneifion and finishing on the summit of Glyder Fach. The descent can then incorporate easy scrambling via Bristly Ridge and the North Ridge of Tryfan.


Grooved Arete
© Groundup Productions
Either of Pinnacle Rib Routes (both VDiff with avoidable sections of Severe) can be substituted for Grooved Arete. For an easier day, Sub Cneifion Rib can be bypassed and the classic grade 3 scrambles such as Dolmen Ridge or The Chasm Face used to ascend Glyder Fach. Gamma (S) on the slabs at the base of Glyder Fach can provide a short addition prior to a route on the main cliff. For climbers wanting a more challenge finale, Direct Route (HS 4c) on Glyder Fach (which is anything but) is highly recommended. It gives a super outing with the crux exactly where it should be; at the top.

Additional climbing can be easily added to the start of the day with an ascent of a route on Tryfan Bach (Little Tryfan) or with some slightly trickier scrambling a link can be made from the top of The Milestone Buttress. If the day still isn't big enough, Flying Buttress (VDiff) on Dinas Cromlech could be climbed first with a traverse of Glyder Fach and Bristly Ridge leading to Heather Terrace and Grooved Arete. Additionally, a further 100 metres of descent into Cwm Idwal would allow a connection into the start of the next enchainments described below.

(Grades: Severe minimum, Severe to VS as described)

Cwm Idwal gives the greatest scope of any area in North Walls for easily linking routes. A superb linkup of routes at HS and VS is possible; three routes on the slabs and walls of Cwm Idwal can be linked to a route on the Grey Slab followed by a final route on the more rarely visited Clogwyn Du leading back to the summit of Glyder Fawr.

A great easier variation at VDiff to Severe standard is also possible. However, those 'ticking' routes from Ken Wilson's famous book Classic Rock may wish to retain Grey Slab as the 4th climb in the itinerary to gain four 'ticks' despite the fact it makes the enchainment more unbalanced.

Other Variations:
On the slabs several alternatives exist, the easiest being The Ordinary Route (Diff). Extreme variations are less straightforward but still feasible. On the walls above, the easiest options have already been described, but for strong parties either of Javelin Blade (E1 5b) or Rampart Corner (E1 5c) followed by Continuation Crack (HVS 5b) would make a superb combination. Grey Arete (HVS 5a) and then Hebenwi (E2 5b) on Clogwyn Du could then be climbed for a sustained and extreme outing.

Cneifion Arete
© Groundup Productions
Worthwhile but shorter alternatives to the two previous enchainments are possible by linking routes on the Idwal Slabs with those on Glyder Face via the Cneifion Arete. The one described is one of the easiest, but dozens on variation on the two cliffs can be combined in for good day out.

Thanks to Simon Panton and Allen Williams for their assistance and permission to use images and maps from North Wales Rock. If you have any comments or suggestions for other North Wales enchainments that you'd like to see added to this article please get in touch.

3rd Pitch of 'A Dream of White Horses'
Mark Stevenson is a serving Army officer currently employed as an engineering specialist with the Apache Attack Helicopter Project Team. He is a qualified climbing instructor. In 1998, Mark made the first British ascents of two 6000 metre peaks in the remote Pamir Mountains of Kyrgyzstan. Since then, as an active member of the Army Mountaineering Association he has instructed on numerous expeditions worldwide and in 2002 led a major Army climbing expedition to the USA. In 2006 he was part of the successful British Services Big Wall expedition to Yosemite. He is currently short listed to participate in the next British Services' Expedition to the Himalayas in 2008 which will attempt the taxing South East Ridge of Makalu, the world's 5th highest mountain.

This summer, Mark with Rich Mayfield, are attempting to climb all the routes in Ken Wilson's book, Hard Rock. That is sixty routes, 22,000ft of climbing, 180 miles of walk ins, 4 ferry crossings, over 3000 miles of driving, all in five weeks.

Mike Peacock
18 May, 2007
Quite interesting but going from Tryfan East Face (Grooved Arete) to Cwm Idwal (Sub Cneifion) seems a bit of a bizarre move!
Kimono
18 May, 2007
and a hell of a long day out!!
Caralynh
18 May, 2007
Just the sort of days I love doing. Hoping to get a 4 or 5 route link-up starting from Idwal slabs next month, and walking back over hte other side to the Vaynol campsite. Thanks for some other good inspiration :) PS - want to do the same for the Lakes??
gingerdave13
18 May, 2007
fantastic i was just thinking of something similar for a bit of alpine training..
TobyA
18 May, 2007
I've done: # Dinas Mot, The Cracks (HS 5a), 90m # Dinas Mot, Slow Ledge Route (VS 4b), 115m # Diffwys Ddu (Cyrn Las), Main Wall (HS 4b), 140m in a day - I wanted to do Gambit climb as well, but as we had driven up in the morning and had to drive back to respective families in the Midlands that evening we were running short of time. One thing I might say is that if you are new to the climbs, doing it like this might detract a bit from the climbs. I hadn't done any of them before and to be honest I didn't really think either Main Wall or the Cracks lived up to the hype. I'm not sure if I had done them as 'the' objective of the day - it would have been different?
More Comments
Add Comment