There is little doubt that Stevie Haston is the UK's most accomplished all-round climber and alpinist. His record speaks for itself. His appetite for climbing is vast.

For the last 40 years he has bouldered hard, climbed bold routes in great style, soloed routes near the edge of his ability, redpointed and onsighted hard sport routes, established and repeated some of the world's hardest ice and mixed routes, and made some impressive fast solos of alpine routes, including 80 ascents of ED+ in the Mont Blanc massif.

Where most of the top climbers of the 70's and 80's have taken a back seat, Stevie Haston at 52, is still going strong. In 2009 he redpointed 9a and established some hard bold routes at Craig Doris in North Wales.

A few weeks ago he established, Cannabis a mammoth 70 metre mixed route that includes 8a rock climbing to M8 mixed to Scottish 6+, and he climbed F9a again, Fred Rouhling's route Hugh at Les Eaux Claire, and still he finds time to look after his vegetable garden, chickens and rabbits.

Here's an overview of his climbing career that started in Gozo and London as a boy, began officially with his first roped climbs on Yorkshire gritstone in 1970 and has continued all across Europe, the USA and the Himalaya since.

1970 - 1979 Age 13. Started rope climbing on Yorkshire grit in plimsoles and big boots. Was part of the great bouldering culture of the 70's along with Ron Fawcett and Jerry Peel. Solo'ed hard routes at Harrisons Rocks, made repeats of many hard routes and went on first trips to the Alps, including his first winter season at age 16.

1979 Got noticed with the second British winter ascent of the North Face of the Eiger with Victor Saunders. This was big news and featured on News at Six on ITV for over a week. Stevie also made a pair of the first Gore-tex overboots for this ascent. Repeated Welsh E5's, bouldered Font 7c+/8a. Free climbed Amanita a Tony Wimot A5 aid route in the Avon Gorge.

1980 Climbed the Nant Blanc Face of L'Aiguille Verte in a few hours. Start of the slate boom; first ascent of Comes The Dervish, the classic E3 in the Vivian Quarries, Llanberis, but was more like E5 when it was first climbed.

1984 A quick summer solo of the Walker Spur, Grandes Jorasses. All the more impressive as this ascent was off-the-couch, he didn't do much climbing this year.

1985 First ascent of Terminator on Craig Du in Wales, VIII. Unrepeated (and ignored) could be the first Scottish IX, well ahead of its time.

1986 First ground up ascents of Gogarth E6/7's with the likes of Isis is Angry, The Drunk, Me and Free Stonehenge. The guidebook describes Isis, 'Looking for trouble? This route takes no prisoners!'

1989 More work but did a few first ascents as weekend warrior including Sea Witch E6 and Angel DustE6 at Gogarth.

1990 Met Laurence Goualt in the Himalayas, start of a great climbing partnership, and more happy times. Laurence is Stevie's best mate, lover and climbing partner who is more at home in the mountains than anyone he knows and understands intimately the medium whether it be rock, ice or snow.

1991 Did a lot of running and had 40 days pure ice climbing around Chamonix up to WI6+.

1992 The first of five knee operations. Soloed five ice routes on the Argentiere glacier in a day

1995 First ascent of the still unrepeated Sans Liberty 8b+, on Pic Adolphe Rey, in Mont Blanc. Second ascent of Octopussey M8 in Colorado, and first ascent of After Eight M8+ in Vail: Gelati M8, Italy. Free ascents of desert towers in the Four Corners region of the USA including: Hindu, Sharks Fin, Mongoose, Spinnaker. First ascent of Garwhali Porter 8a at 4,400m, India.

2001 Second ascent of Mission Impossible M10, Italy, but without spurs to make it a bit harder. This spurless ascent started a bit of a trend amongst the world's top Mixed climbers.

2002 Free ascent of Sundevil Chimney on the Fisher Towers, USA: with two 5.13 pitches. The ransom incident in Nepal whilst on the Slovenian Janak '02 expedition. Rebels threatened the team unless they paid a £4,000 ransom.

2003 Serious snowboarding accident after a very enjoyable time snowboarding in the Himalaya. Severed achilles tendon and a shattered ankle. The doctors and Laurence told him that he was fine, if he'd know the truth, "I might have killed myself."

2005 Moved to the Pyrenees to get away from the danger of alpine climbing and claustrophia of Chamonix. Whilst Chamonix is home to some of the best climbers on earth, climbing 8a is standard, it is also home to the most competitive and cut-throat climbing scene. Found peace, gardening and farming in Ariege.

2006 Spent most of the year caving in the Pyrenees. Cave exploration involving digging and explosives, 'like a big alpine day out'.

2009 Climbed Descente Lolitta 9a, flashed Greenspit a roof crack given 8b. Established Harmony, Bam Bam E8 6b, Dream Canyon Handshake E7 6b, 6a, Requiem for a Vampire E8 6b and Nightstalker E9 at Craig Dorys, North Wales.

2010 Climbed another 9a, Fred Rouhling's route Hugh at Les Eaux Claire and established Cannabis, a crazy and beautiful hybrid mixed route on granite, 70 metres of 8a rock climbing to M8 mixed to Scottish 6+.

You can follow Stevie on his blog as well as in this series of articles at UKClimbing.com over the next 12 months.

Stevie Haston is sponsored by: 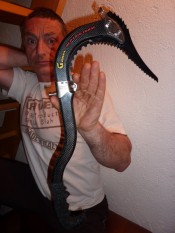 Stevie Haston on Mixed Climbing; Why, What, Where?

GGG...Gogarth! An article by Stevie Haston

2022 - The Year in Rock Climbing Ascents

"Some of my best times were in North Wales doing new routes in the Slate quarries, and on Gogarth, in the late 70s and mid-80s. Concurrently visits to the Alps in winter started my tally of solos of alpine routes to...

johncoxmysteriously
27 Apr, 2010
Fisher Towers looks surprisingly - well, rock-like, in that picture. Did Stevie really free Amanita? I thought that was somebody else. It's very hard now to visualise a time when it was thought easier to do that at A5 (shudder) than E4. Anyone care to explain what was involved in doing it as A5? jcm
tobyfk
27 Apr, 2010
Certainly someone else (Monks?) had the credit in the early 1980s CC Avon guide that I grew up with. Presumably it was deemed unjustifiably loose in Wilmot's time? Duncan will be along shortly to clarify though, I'd guess.
Jody
27 Apr, 2010
Is the picture overhaging roof crack in which Stevie Hastons legs are stuck Cannabis? 70 metres of 8a rock climbing to M8 mixed to Scottish 6+. It looks quite warm and where are the axes?
Tyler
27 Apr, 2010
Pretty astonishing list of routes.
James Oswald
27 Apr, 2010
Awesome list of routes. 2004 - Should read losing hope instead of Loosing. Brilliant article as always though UKC. Thanks James
More Comments
Add Comment
Loading Notifications...
Facebook Twitter Copy Email