WINNERS Tickets (10) To See Ueli Steck at the RGS, London

Thank you to everyone who entered.

An extra prize had been added. One lucky person with the correct answer will be given a SummitRocket pack, a high-performance pack for the expedition alpinist, designed by Ueli Steck.

The charismatic Ueli Steck will be in the UK for a one off journey into his incredible world and we have ten tickets to give-away courtesy of Mountain Hardwear (facebook.com/MountainHardwearEurope).

Presenting his take on speed ascents from the Alps and the Himalayas, it will be a truly fascinating and inspirational insight. This will take place in London at the Royal Geographical Society Hall on Tuesday 11 December at 7:00pm. You can buy tickets HERE.

TEN TICKETS UP FOR GRABS - Enter Below

Ten tickets are up for grabs. Simply answer the question below.

- This competition is only open to registered users at UKClimbing.com and UKHillwalking.com.
- Competition closes on 20th November at 09.00 GMT.
- The winners will be notified by email.
- Prizes will only be posted to a UK or Ireland address.
- The winners' names will be announced on UKC/UKH and facebook.com/UKClimbing.

What can you say about someone who at 36 has changed perceptions and shaped alpinism in recent times? This Swiss machine is part of a very small world of elite mountaineering athletes crafting a living out of a special talent. Ueli Steck is one of those athletes who has marked their time in this world with his style, which can be described as mountaineer meets ultra marathoner with a hint of Usain Bolt! With icy cool nerves, pure raw talent, exceptional concentration and hard graft, Ueli has not only been recognised by the climbing community but also the mainstream world for his pioneering solo ascents in a style feared and revered by most.

2009 is still remembered as Ueli Steck's year, and was the starting point of his trilogy of alpine speed ascents. The Eiger (climbed via the Heckmair Route in 2h:47), Les Grandes Jorasses (Colton McIntyre 2h:21) and finally the Matterhorn (Schmid, Route 1h:56). Seven hours and four minutes to climb all three iconic alpine north faces. Ueli's year continued when he was awarded the Piolet d'Or (with Simon Anthamatten) for the first ascent of Tengkampoche (6500 m). Not content with such achievements the Swiss Machine summits his first 8000 meter peak, the Gasherbrum II (8035m), in the style he likes most; light, solo and fast. He concluded his Himalayan escapades with an ascent of Makalu (8468 m), in alpine style, without fixed ropes.

2010 was a year of intense physical preparation as Ueli had decided to attack the peaks of the Himalayas after his previous taster. He was planning to keep up to his is nickname 'The Swiss Machine' due to his speed, accuracy and organization, this time on higher and more challenging mountains. So in spring 2011, he climbed the 8,000-meter peaks of Shishapangma and Cho Oyu at lightning speeds.

As in all new sports styles Ueli required innovative equipment and worked meticulously on his Pro lab with the product team from Mountain Hardwear, making his clothing, equipment and accessories, lighter, simpler and more efficient. The primary function was to enable Ueli to pioneer high altitude speed ascents but with the main purpose of protecting him in the harsh environments. For this new generation of products, a combination of speed climbing and high altitude mountaineering was blended with the focus being "as simple as possible, and no simpler." This work has led to new fabrics and technologies now being available to allow Ueli and others to push their own boundaries.

Presenting his take on speed ascents from the Alps and the Himalayas, it will be a truly fascinating and inspirational insight. This will take place in London at the Royal Geographical Society Hall on Tuesday 11 December at 7:00pm. You can buy tickets HERE. On 19 May 2012, Ueli stood on the roof of the world with his friend Tenzing Sherpa. They climbed Everest without oxygen and in respect of the particular challenges and characteristics the highest point on earth attracts.

Ueli keeps on showing his versatility and eye for a challenge: On the weekend of 18th and 19th August 2012, having recently learnt to paraglide and enjoying a splendid weather window, Ueli embarked on a trip alternating ascents of Jungfrau, Monch and Eiger with paragliding to reach the start of the next wall, completing the journey in just 12 hours. 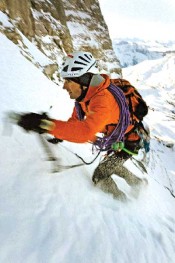 3 Names
22 Nov, 2012
Yay! I won a ticket.
Mountain Hardwear UK
23 Nov, 2012
Congratulation Vince and all the other prize winners. Should be a cracking night with Ueli hosting.
waldenmatt
8 Dec, 2012
I also won! How do I get in touch to claim it? Thanks! Matt Sumpster
Michael Ryan
10 Dec, 2012
You should have got an email from Mountain Hardwear. Your ticket should be on the door at the event. Mick
waldenmatt
10 Dec, 2012
Thanks Mick, no email but I'll just turn up as suggested. Cheers Matt
Add Comment
Loading Notifications...
Facebook Twitter Copy Email LinkedIn Pinterest