After spending some time route climbing at Rumney, where he repeated Jaws II, 9a+, Paul Robinson has returned home to Colorado where he has already repeated White noise, ~8C, and The Grey, ~8B+, both at Wild Basin.

This is how it went down:

The conditions have been so good the past few days. I knew I needed to capitalize on that and get out there as much as possible.
On Sunday I went to the Basin and worked the moves out on White noise. I felt semi confident on the moves and was psyched to return the next day.
Fortunately after some rest it all came together and I was able to put it together quickly!

The next day the psyche remained high. I called everyone I could think of to go climbing, but everyone had to work or was going climbing elsewhere... So I decided to go for it anyway. I did the top of The Grey first on a rope since it is tall and scary. Then I started to try it from the bottom.
I was a little bit timid in the beginning because I only had two regular sized pads and a mini one. But after a little while I started to feel confident on the movements.

The sun set and I began packing up my things. I went to retrieve my static line. When I returned to the boulder I thought to myself that I hiked all the way out there so why not give it a few more efforts.
My first two were decent. And then it was the third when it went down. Usually I am scared and hesitant but fortunately I was able to just turn this off. I got to the top and there were really no thoughts at all. I just executed the top moves and found myself atop one of the cooler boulders I had ever climbed!
Thankfully I did not fall because I have no idea if I would have hit the pad or not!

5 hours of hiking in 3 days. Ready for a rest day today. 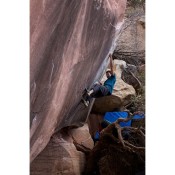 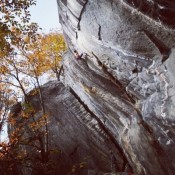 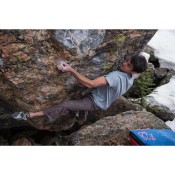