Here is what Dai says about his new boulder problem Horizon, at Mount Hiei, Kyushu.

Finally I was able to hold myself after swinging at the crux where I had fallen so many times.
I was calm enough to put my right foot onto the tiny stance even as I miss it once.
Then turned my body 180 degrees and set both feet on the lip. Made another 180-degree turn and climbed up onto the pitch-dark ledge.

The prime objective of this Kyushu trip was to complete the Super Project in Otani sector of Hiei Mountain area in Miyazaki prefecture on the Japanese Southern island of Kyushu.

I first saw this project about three years ago when Jinnai-san took me to a new area of Hiei Mountain where there was a huge rock with a stunning roof.

It was so 'shocking'.

I had never seen such a massive granite boulder with continuous holds. Ease of access is also great, and I got really excited that I met this fantastic project! It was nothing but the 'Super Project'.

As I started to work on it, however, I found it was much harder than I had expected and was difficult to focus only on this project as there were other fascinating projects to try in the same area.

Conditions have hampered me, too. Often struggled with seepage after the rain through the crack even it's in the roof. How many times I was rejected by the wet cracks.... Nonetheless, I kept going back to this project to figure out the sequences and practice the moves whenever I felt fit and spent a lot of time to tackle this giant roof.

During the trip of 2014, though it was a short trip, I was able to focus on this project and have done all the sequences by dividing into two parts at a rest spot in the middle of the line.
Then as I accomplished FAs of other major projects in the area such as Amaterasu, I brought myself to concentrate on this project both mentally and physically.

This might be the last chance for me considering my age...

My desire to complete this project this time was strong.

I embarked on this trip with such feelings.

Yesterday, it was sunny and the temperature was quite high. Most holds were a little bit wet after the rain from two days ago and barely becoming dry enough. But some holds were completely wet, so I stuffed tissue papers to stop seepage. Then, I started.
As soon as I did, I realized I couldn't do the crux moves which I had done before, maybe because it was too hot and I hadn't been on it for a long time. This made me very nervous. So I switched my mind to concentrate on just practicing all the sequences during the daytime and waited for the evening.

The temperature dropped sharply in the evening and conditions improved.
Then I made the first serious attempt of this day.
I was pretty good, starting smoothly but fell at the crux no-feet swing.


The second attempt was also good, or much better than the first one. I held myself from swinging off for the first time but missed catching a tiny stance for the right foot and fell.

Through these two attempts, I got confident that I was very close to complete this project, then waited for the temps to become much cooler.

When the night came, the third attempt was with the lanterns – but failed at the beginning. Following a short break, I made the fourth attempt.
I went through the sequences with some fatigue, and fell right before the crux.

After this attempt, I felt I may have lost my concentration. And I was exhausted. It was disappointing that I probably missed the chance because it was going to rain the following couple of days. I regretted that I failed at the second attempt – why was I not able to hold myself at the crux...?

Conditions gradually improved over time, however, and the temperature dropped. So I decided to try again. Even if I didn't make it, it would be a good training for the day and it'll be a rainy day tomorrow - and this thought made me relaxed.

Took a break for a while. Usually I don't eat so much when climbing but I forced myself to eat. Then I felt like I got refreshed.

The fifth attempt. Making the initial sequences with sensitive foot-works smoothly and reaching to a rest spot. Even though it's supposed to be a rest, I couldn't stay long but just shaking one time for each arm. Then going into the second half. It was perfect so far. Moves become suddenly harder from this point on, with complicated and tricky footwork and then three moves without foot holds.

The following three moves were the crux of this project. I jammed my left fingers properly.


And put my right hand via a shallow undercling intermediate pocket hold then to a good hold. Then cutting both feet and controlling the swing - this was the real crux.
Got it! Similar to the second attempt, I missed catching the tiny right foot hold but this time I was calm enough to recover and put my foot onto it.

I sat down on the pitch-dark ledge with heavy breathing and stayed there for a moment until I became aware that I've done it finally. I had to climb up another 5 meters of slab to reach the top. So I asked to pass me a headlamp and enjoyed the completion of this project with fear but with full of happiness.

This is how I completed my hardest climbing ever.

Before finishing this project, I was afraid that I would burn out and might lose motivation for climbing. But this never happened. I am already obsessed with other projects, a lot of projects.

Is it the sign of some youth still left in me that I can put this Super Project in perspective as one of the milestones passing en route not the final destination?

I would like to express my deepest appreciations to Tomiyama-san who devoted to clean the rock and removing tons of soil over the rock inside the cracks and the surface. And of course to Jinnai-san for his tremendaous support in so many aspects.

Speaking about grade, I will write up in a separate post.

3rd Ascent of Change (9b+) for Seb Bouin 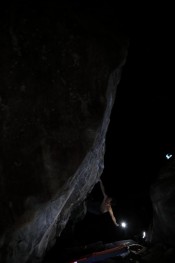