Dave Graham has made the first ascent of Topaz in Wild Basin in Colorado's Rocky Mountain National Park. He suggests Font 8C.

In a typical Davegrahamesque write up on Instagram, he says:

Made an unexpected first ascent of Topaz [8C] up in Wild Basin on Wednesday! Super syked, and equally surprised!! ... This roof was one of the primary lines I had cleaned when we first started developing the zone, yet somehow remained as an unsolved rig up until I tried it a few days in the Spring, found mediocre beta, but needed much colder weather to make any real links.

As the weather has been going to shit up in the Alpine zones rather early [hosing me on the new roof in up chaos 😡] focus shifted over to this thing and Hypno[tized minds].

With colder weather, Daniel Woods, Paul Robinson and I tinkered away and developed more functional methods, and started trying from the start.

This boulder is somehow long-winded; it begins with some strange technical footwork and a tedious set up for a punchy frontal divisive move to a pinch, the gateway to the last precarious sequence of foot moves and hand shifts and mini bumps.

I had no clue I would end up on the top the try I actually climbed it, in a really rare rock climbing moment, tension and nerves through the final sequence were toned down as each move I completed, I genuinely thought I was falling and about to slip off every move of the final sequence. AMAZING.

Expectations lead to a lot of stress while trying hard projects, its pretty special when you catch yourself off guard.

Topaz is the second ~8C in the area, after Daniel Woods' White noise, which was put up in 2012. Having said that, I guess White noise is now considered ~8B+/C.

The Walk of Life E9, by Calum Muskett and Tom Randall 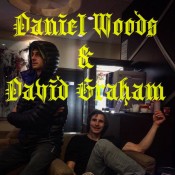 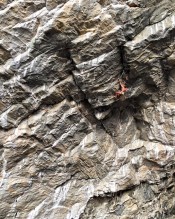