Our Friday Night Video this week is from BMC TV and Hot Aches Productions, celebrating the life of Ken Wilson and his classic book; Hard Rock. It might have first hit the shelves in 1974, but this feast of climbing literature has weathered the following years as easily as a granite crag.

Over 40 years on, the routes lovingly described by the bold first ascentionists are often still the highlights of any trad climber's year: The Bat, Totalitarian, The Old Man of Hoy, A Dream of White Horses, Diagonal, Vector, Valkyrie, Sirplum to name but some. These 61 routes share 173 gleaming stars and all perfectly capture that unique feeling of British climbing adventure.

Hard Rock has now outlived Ken, who died last summer. His death left a hole in the climbing community, but his legacy will continue to shape British climbing. 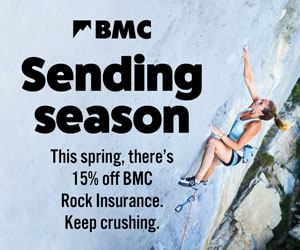 Steve McClure writes about his recent onsight of Steve Mayer's Nightmayer E8 6c on Dinas Cromlech in the Llanberis Pass - the first ascent of its kind on this route and a bold one at that... The first moves are OK, but then it all gets ...

Steve McClure has made the first onsight ascent of Steve Mayer's Nightmayer E8 6c on Dinas Cromlech in the Llanberis Pass. The route features sustained technical climbing, long run-outs, some iffy gear and a tricky high crux. It was made famous by a...

Below we have the film of Steve McClure climbing GreatNess Wall (E10 7a) which was filmed by Keith Sharples. He was going to take pictures but thought a fall from the last move would look far better. Fortunately for Steve, he climbed the route...

Fri Night Vid Ondra falls off a 7a

The end of days! Up is down, black is white and Ondra has fallen off a 7a sport route. Twice. The incident was filmed in Croatia at the climbing area of Istria and it's a shocking watch. Later on in the film, Ondra manages to casually onsight a fe...

This week's Friday Night Video is a bouldering masterclass from Jimmy Webb. He attempts Lucid Dreaming, a notoriously crimpy Font 8C which is very difficult to find in the right condition. On the heavier side, Webb explains that he usually shies...

This week's Friday Night Video is about dirtbag climber Matt Cornell soloing the hardest mixed climb in Hyalite Canyon, Montana. Conrad Anker provides some context to the difficulty and notoriety of the route through a series of...

This week's Friday Night Video takes us to Ratikon in Switzerland. Fabian Buhl attempts the route Déjà, which was bolted...

This week's Friday Night Video takes us to Joshua Tree as Jeremy Schoenborn and Robbie Phillips attempt one of the hardest...

scot1
13 Oct, 2017
What a crazy, narrow minded idiot
keith-ratcliffe
13 Oct, 2017
'Shine on you Crazy Diamond'
eroica64
13 Oct, 2017
Totally and utterly brilliant film-making that puts the Red Bull Alex Megos thing in its miserable, flippant, place. Enthralling stuff that left you wanting more. So .... more please BMC and Hot Aches. Great use of drone photography for Cenotaph and Stanage. Brilliantly evocative climbing of Right Unconquerable. The narrator by the way, was excellent too. Who was it?
scot1
13 Oct, 2017
And yet two of the climbers in the film are accomplished competition/sport climbers. I don't think Ken would approve
keith-ratcliffe
13 Oct, 2017
And who was the young lad climbing? That wobbly rock on Tryfan didn't make him bat an eyelid - star.
More Comments
Add Comment