Other notable ascents by women in the Red River Gorge this year include Anna Liina Laitinen's redpoint of Lucifer 8c+ and Melissa Le Nevé's ascent of Golden Ticket 8c+.

In 2012/13, Matilda was operating in the upper echelons of women's sport climbing, onsighting 8b, flashing 8b+ (Friends Like You, Frankenjura; Kalea Borroka, Siurana) and redpointing 8c+. Prior to transitioning to outdoor climbing, Matilda was a junior competition star and made finals in multiple Lead World Cups. Having completed her studies in Stockholm, Matilda now has designs on more hard sport ascents. I sent her some questions to find out more about what she's been up to...

You were competing at a high level as a junior and for your first years as a senior. What made you stop competing?

I started out as a competition climber. I think I entered my first competition after just one-and-a-half months of climbing and after that I took part in all competitions that were available both nationally and internationally. As I started university at Stockholm School of Economics in 2013 I had less time to focus on climbing, and I also wanted to do well in my studies. On top of that my motivation for competitions was also deteriorating. Prior to this I had started climbing more outside and to me that was just so much more fulfilling. I want to feel 100% motivated and passionate about what I am doing, hence I decided to focus on climbing outside when I graduated from university in 2017. However, I do not rule out the opportunity to go back to the circuit and do some of the competitions even though my main goals and focus will be on climbs outside.

Competitions have taught me so much and I am truly grateful for my years competing, but I am also very excited to start a new chapter in my climbing career.

You had a successful period in Europe in 2012, when you onsighted your first 8bs, flashed 8b+ and redpointed 8c and in 2013 you climbed your first 8c+. What do you think enabled your onsight/flash abilities to be so high at this time?

2012 was definitely a breakthrough year for me. I think it was a combination of some changes in my training and being able to fully focus on climbing after finishing high school the year before.

Since I had been competing so much I was used to this type of climbing (onsight/flash) and I have always enjoyed trying to climb routes first try, trying to tap into that perfect mental state of climbing with flow and no hesitation.

What have you been up to since then - I know you have been busy at university etc.?

Reading a lot of course literature and writing papers! I graduated last year from Stockholm School of Economics and since this spring I have been climbing full time again.

You have switched your focus back to training and making hard ascents lately. What brought this about?

I started training with my coach, Carlos Cabrera, again last summer. I really like to set goals, having a training program and follow up on what I am doing.

We have the same systematic approach now as when I was competing, but the difference now is that I can choose when I want to be in shape and what I want to be in shape for. It is also "easier" to have more steady and continuous improvement since I do not have to peak for a competition season every year. For the trips this year I prepared for the style of the area that I was going to climb at and sometimes I even prepared specifically for certain routes. It was a very interesting and exciting process which I am looking forward to doing more of next year.

Tell us about Pure Imagination. What inspired you to try the line? How long did you spend on it?

Red River Gorge has been on top of my list of climbing destinations I want to visit for so many years. Obviously I had planned to try some of the harder routes, but it turned out to be a bit of a weird trip for me. I got sick about half way in and the first day I was feeling better I jumped on Pure Imagination to "boulder through" the route as I figured that would not make me too out of breath after being sick. The route is definitely my style - crimps and slightly overhanging. I had tried the moves before I got sick but weirdly it felt surprisingly good and I ended up having a good burn on it by the end of that day. So basically, I went from lying in bed with a fever to full on project mode. Probably not the smartest decision.

The route felt better and better and after a rest day I was heartbreakingly close to ticking it. Then the cold weather kicked in and we even got some snow! We tried to climb every day but most days I would give up because it was so cold I could not even close my fingers anymore.

The last day really was the best day, the weather got a bit warmer and the friction was perfect. I was so happy to clip the chains of Pure Imagination - the route and the process meant a lot to me! However, my body was a complete wreck by the end of the trip due to the illness so I really needed some rest when I got back home.

Did your competition mindset come into play here, when the pressure was on to do it on your last day?

Maybe! I try block out pressure, such as it being the last day, and just focus on my climbing and finding that state of mind on the wall where only that next move matters. I had a similar experience earlier this year where I also sent a project, Golden 5.14b / 8c, on the very last day, but that trip we were also shooting a video (which will be released soon!) so it was a bit more stressful.

There have been a lot of hard redpoints by female climbers in the Red River Gorge (and globally!) recently. Is this a factor that is inspiring you to return to form?

It is super inspiring! I definitely enjoyed sharing thoughts and experiences of the projecting process with all the strong (female) climbers in the Red, it was a very encouraging atmosphere.

I think it was natural for me to start training hard and set new goals again when I was done with university, but women's climbing taking so many steps forward recently is definitely motivating me even more!

It seems as though in the past you have made very quick redpoints at 8b+/8c and above. Do you enjoy ticking things quickly, or are you interested in spending a bit longer on even harder projects?

Going forward I want to see how far I can push my limits in sport climbing – so yes, I plan to try routes that will take longer to finish.

So far I have been very intrigued by the process of projecting and the many mental challenges it comes with and I am very excited to explore this more next year.

You recently went to Chamonix and tried multipitch sport for the first time and planned to get up high in the mountains, but the weather didn't allow for it. Are you interested in trying more disciplines such as ice, trad and alpine climbing? In which direction do you see your climbing heading now?

Right now I will focus on sport climbing and I want to become the very best I can within this discipline. However, my life goal with climbing is to master all disciplines eventually! There's so much to learn and experience.

Do you think you would ever return to the World Cup circuit?

It will not be my focus to compete but never say never ;)

Matilda Söderlund is a top sport climber having redpointed 9a and flashed 8b+. In 2018, she returned to top form by redpointing Pure Imagination (8c+) after a long period of studying...

Fri Night Vid Matilda Söderlund on The Elder Statesman 9a

In October, Swedish sport climber Matilda Söderlund achieved her long-term goal of climbing 9a with an exceptionally fast redpoint of The Elder Statesman 9a in Frankenjura, Germany. After just four days of work, she clipped the chains and...

First 9a for Matilda Söderlund in Frankenjura

Swedish climber Matilda Söderlund has climbed her first 9a, The Elder Statesman in the Frankenjura, Germany. The... 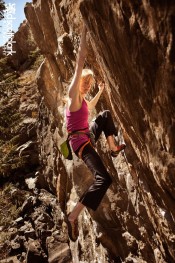 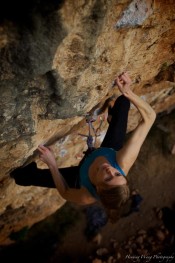 Another 8b+ flash by Matilda Söderlund

Anna did Lucifer not Southern Smoke

In reply to UKC News