Considering a few mitigating circumstances in 2020, Damian Hall has had a superb year. He set the tone in January when he broke the Fastest Known Time (FKT) for a winter Paddy Buckley, completing the round solo and unsupported. After lockdown, he broke John Kelly's week old Pennine Way record and more recently set a FKT on the South Wales Traverse.

In the run-up to Kendal Mountain Festival, we're interviewing some stars of the show and Damian is part of the film Totally FKT - a Summit Fever Media documentary that covers Damian and John Kelly's attempts to break the 31-year-old Pennine Way record.

Enter the code UKCLIMBING10 when purchasing tickets at kendalmountainfestival.com
Share:

Return to Latest News
In association with Kendal Mountain Festival 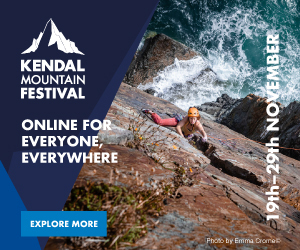 Damian Hall is an ultra distance runner, UKA coach, journalist, and - in his own words - a climate emergency hypocrite. He's most at home running long distances over lumpy things, having won a variety of horrific...

Ultra-runner Damian Hall has set a new fastest known time on the South Wales Traverse; a 72-mile route that covers 31 summits and 18,000ft of ascent over the Brecon Beacons. The previous record-holder was Dan Doherty who ran a time of 1...

Damian Hall recently completed a record breaking winter Paddy Buckley Round, finishing in a time of 21:20:30 - 7 minutes ahead of Jim Mann's previous fastest known time. We caught up with him to find out more.

This year's extraordinary version of Kendal Mountain Festival begins today and the team have done an incredible job of curating a festival for the online world. There are films on-demand, sessions beamed to your TV or computer and exciting prem...

Kirsty Pallas is an enthusiastic instructor, experienced climber and an advocate for a more diverse outdoor community. Her film Called to the Mountains is playing at Kendal Mountain Festival as part of the Women in Adventure session, so we...

In the build-up to this year's Kendal Mountain Festival, we're talking to some of the stars of the event and will hopefully be providing a snippet of what can be expected throughout the festival. In this interview, Rob Greenwood catches up with...

Watch the superb new trailer for this year's edition of Kendal Mountain...

Kendal Mountain Festival is just around the corner and the event is going...