9b First Ascent for Angela EiterNewsflash

Angela Eiter has made the first ascent of a new 9b route which she has named Madame Ching. If the grade is confirmed, this would be the hardest first ascent climbed by a woman.

Madame Ching is near Eiter's home in Tyrol, Austria, and was a project of her husband's until he handed it over to her. During a lockdown in May 2020, Eiter started working the project out of necessity and explained on her Instagram that she 'found the sequences very hard,' speculating that it may not be possible for her.

After struggling on the project for some time and going through a 'humbling' process of working the route and struggling due to her heigh, some refinements to her beta and progress in her performance meant gradual improvements.

The weather was an issue towards the end of Eiter's redpointing. She told Red Bull that on the day of her ascent she arrived to find the route wet. After waiting an hour and carefully drying the holds, the route was dry enough to attempt. She arrived at the top of the route just as the rain started.

On the grade, Angela commented: 'All the time I am asked what's the grade. I love the challenge to climb a route [at] my limit but I like it less and less talking about the difficulty. I've been wrong several times. [I'll] share my personal estimate; due to the power endurance style that [suits] me well, I think it could be similar to Planta de Shiva which I did in 2017.'

Eiter was the first woman to climb the grade of 9b in 2017 with her ascent of La Planta de Shiva at Villaneuva del Roasario, southern Spain. Since then, only Laura Rogora and Julia Canourdie have matched her effort.

Head over to the Red Bull website to watch a video of Eiter on the route.

Excalibur 9b+, by Stefano Ghisolfi

Seb Bouin on Nordic Marathon (9b/+)

New 9b+ for Adam Ondra

Angela is undoubtedly one of the best sport and competition climbers of all time. She has won four World Championships, one European Championship and three World Cup seasons. Her other 9a redpoints include Era Vella...

Austrian climber Angela Eiter has redpointed Adam Ondra's Pure Dreaming in Arco, Italy. This was Angela's fourth 9a or harder. In 2017, she became the first woman to climb 9b with her ascent of La Planta de Shiva at Villanueva del Rosario, Spain.

On 22 October 2017, Angela Eiter became the first woman in history to climb 9b by repeting Adam Ondra's La Planta de de Shiva at Villanueva del Rosario. At a time when only two women have climbed 9a+ and only a dozen (between 10 and 17) or so men...

Newsflash Another 9a and 8c+ for Angela Eiter

Austrian climber Angela Eiter has climbed her second 9a and another 8c+, bringing her ticklist total for 2014 to five 8c+'s and two 9a's. This is considered to be the most impressive annual ticklist for a female sport climber in history.

In October, Austrian climber Angela Eiter made the first female ascent of Zauberfee, 8c+ at Eremo near Arco, Italy.... 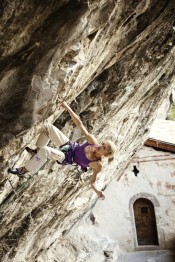 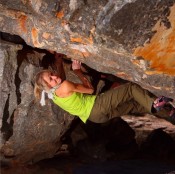 Just a bit scared for her as it's right at Mr Downgrade Schuberts doorstep.