A ten-strong all-Nepali team has achieved the coveted first winter ascent of K2 (8611m), the last of the fourteen eight-thousand-metre peaks to be summited in the winter season. The ascent was a joint effort from three separate teams of Nepali climbers who united 'to make Nepal and its climbing community proud', marking significant progress from the traditional Sherpa role as porters to becoming self-sufficient climbers capable of organising and leading their own expeditions on major ascents. The summit group consisted of Nirmal 'Nimsdai' Purja and his team of Geljen Sherpa, Mingma David Sherpa, Mingma Tenzi Sherpa, Pem Chhiri Sherpa and Dawa Temba Sherpa; Mingma Gyalje Sherpa and his team including Dawa Tenjin Sherpa and Kilu Pemba Sherpa, and Sona Sherpa who was part of the Seven Summits Treks team.

UPDATE 18:44 18/01: Nirmal Purja has announced on Instagram that he achieved the ascent and descent without use of supplementary oxygen.

According to mountaineer and blogger Alan Arnette, the team summitted via the Abruzzi Spur at 5 p.m. local time and are currently descending in darkness. The team gathered just before the summit in order to reach the top together and were delayed in their ascent due to line-fixing for other teams lower on the mountain, who are planning summit bids at the next available opportunity.

News was also slower to break due to an accident at a lower camp involving Spanish mountaineer Sergi Mingote, who is reported to have fallen and was unconscious while awaiting evacuation. Update 14:40 16/01: Sergi has died on the mountain after collapsing on the descent from C1 to Base Camp.

The combined effort from the teams made some remarkable progress this afternoon. As per the mega plan, big well done to our team lead by Mingma G with Mingma David Sherpa (Team Nimsdai) , Mingma Tenzi Sherpa (Team Nimsdai) and Sona Sherpa (SST) for successfully fixing lines up to Camp 4 at 7800m, The Highest Altitude Ever Gained at K2 in Winter !

Later today, I will be leading the fixing team to the summit. We hope to stand on the summit together !

Also known as the 'Savage Mountain', K2 is the deadliest of the world's highest mountains due to its topography and severe weather systems. Approximately one person dies for every four who summit, and in winter the risk of continuous storms on its steep and exposed routes in temperatures below -65 degrees Celsius - as well as the lower barometric pressure in winter, which makes oxygen uptake harder - make any climb and retreat extremely dangerous, especially given the short ten-hour daylength of the season.

The 2020/2021 winter season attracted over 70 climbers to the mountain. Speculation mounted online as to the suitability of some teams to the task. Four teams including one commercial group consisting of climbers with differing levels of experience travelled to Base Camp. Italian mountaineer Tamara Lunger is the only climber among the hopefuls who had experienced climbing above 8,000m in winter, following her winter attempt on Nanga Parbat in 2015-2016, where she reached 70 metres below the summit.

This season, teams battled narrow weather windows and faced a major setback as a storm with winds reaching up to 120 km/hour ravaged the mountain one week ago, destroying Camp 2 and forcing climbers to reassess their plans.

Nirmal's team lost all of their equipment for the summit push and they were forced to descend and reascend with new loads to replenish the higher camps and fix ropes up to Camp 4.

The first ascent of K2 was made by Italian climbers Achille Compagnoni and Lino Lacedelli in 1954. The first winter expedition on the mountain was led by Polish mountaineer Andrzej Zawada in 1987/1988.

In January 2018, Russian-Kazakhstani climber Denis Urubko broke away from his team at 7,400m and reported to have reached up to 7,600m solo and without supplementary oxygen before being forced to retreat. 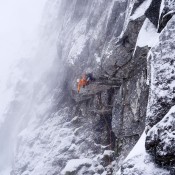 Amazing effort, I think a number of them weren't using supplemental oxygen which is good to see. They seem to have moved very quickly for a team setting fixed rope.

Great news. It seems fitting that this went to an all-Nepali team. I hope they all make it back down safely.

“It seems fitting that this went to an all-Nepali team”

Because they have played such a huge part over the decades massively supporting western climbers in many high altitude achievements while rarely taking the limelight themselves.

I imagine they have had a lot of practice!