Share
fishinwater 9th June, 2009
This has been read 15,788 times
Share
I am a climbing whore. I will admit this freely to all and sundry, without a qualm. Let's not kid ourselves about this; no need for coyness. This climbing thing is all about sex – it provides the perfect opportunity for sexual behaviour to be played out without any difficult questions about sexism, gender roles and ...well...sex. Not something you'd find in the most popular sport of our age, fishing, is it? We can all pretend climbing is just a jolly good 'high risk' sport, but take an honest look at its language and the way it's carried out and you'll see something quite different.

The whole thing slapped me in the face the first time I visited the local climbing wall on a busy evening – or rather - hit me in the nostrils. Never mind the smell of foot-rot rock shoes, the smell of hormones came wafting over from the clutch of semi clad young men skulking around the base of the bouldering wall. Apart from the beach, which if you are adolescent is a painful experience of repressed sexual desire, where else is it acceptable to wander around showing off your body? Come on, it's not because they are 'hot' from all that 'hard' climbing. Don't be silly.

And they're contagious those hormones – one sniff, one breath of chalk dust and testosterone, and the old men think they can become boys again. How else would they dare display their ancient hairy chests to the world with no shame?

Such is the dilemma of women images where at some level they exploit, on another give pleasure, on another celebrate, on all levels sell, and on another darker side feed the myth that women are the tools of men

And the women? Well, to some extent they like to watch the boys show off and humiliate themselves – it's the school playground scenario where flirtation was learnt and physical boundaries explored in an excited and flushed yet, at the same time, dangerous sort of way (climbing is play however you want to look at it – it's pointless fun made 'serious' by a risk factor that isn't that far from the tree climbing we all did as children). Except it's not really like the playground. We're not as innocent as we were. This is voyeurism in its purist form. Which woman would really deny the pleasure to be had looking at those semi-clad muscular men? And please don't try to claim you're only looking 'objectively'.

This contained sexual atmosphere gives women the freedom to both compete and play without any fear of sexual harassment. Unfortunately the inevitable result is the sight of over-endowed women wearing skimpy halter necks trying to look composed halfway up an overhang. To other women it's not a pretty sight – but I wonder if the men feel the same way?..

And so we all stare at those muscle bound men and women as they thug up the wall - with admiration if they are the opposite sex, or jealousy if they are the same sex. Their climbing ability is only part of our subjective view.

Don't think this repressed sexuality is only found at the local climbing wall - be honest, among you trad climbers who isn't a 'gear tart'? This is a phrase I only came across recently, but one that doesn't surprise me at all. It conjures up the perfect image of middle-aged men with small pointy beards, or young things convinced they could have a beard if they wanted, lusting over bright and shiny metal objects. What wouldn't you do for an alluring cam with its curves and moves? You all know that 'gear fondling' is part of the process of a growing addiction and part of an increasingly one-track mind. Actually I think gear is more like a kept mistress – coveted in secret and visited occasionally in anticipation of a satisfying time. And don't get me started on rope. That one is SO obvious.

How did I get to be a colluder in this mass deception? By a flirtation with some casual rock that led to a full-blown intimacy with limestone – within a serious relationship of course. I'm not irresponsible. Even on my first frivolous adventures I encountered the sexuality of climbing. I climbed without shoes along polished limestone (never 'up' at that stage – I was too much of an innocent for that) and discovered that barefoot climbing women are a sexual threat to men. I suppose it was the red painted toenails that really did it. It brought out the worst of the protective and patronizing instinct in men who were supposedly concerned for my safety. Oddly enough the man I knew who also climbed barefoot never drew a similar interest to his activities. Hmmm...

And it was while I clambered around this piece of rock I learnt the physical pleasure of the activity – stretching and twisting; touching the rock; creating and enjoying the rhythmical pace. The high of the rush of adrenalin followed the long lasting feeling of sheer contentment after it's all over – remind you of anything?

This initiation led me to be curious about the 'up' activity, and after a short top-roping course I was no longer an innocent – a week later I was in the climbing wall unashamedly soliciting for a partner. And how easy it was too – a short exchange of helpful tips over a bouldering problem and I had a date with a nice young man. And he was to lead me further astray by teaching me lead climbing. It makes me smile wryly to know I can, without any misgiving, approach a man (or boy) and make a date to climb with them. The boundaries are there - but not quite as we know them.

And all this brings us to 'Belay Bunnies'. A term that refers to a bit of decorative fluff in whose hands you are prepared place your life for a sunny afternoon at Portland or some other scenic place. What better way to avoid the commitment issue within a real relationship and still get to stand and stare? Climbing can provide instant small intimacies that lead nowhere, with no expectations - except the one of not letting you deck. The term 'Belay Bitch' is going too far for me – too aggressive and with more than a touch of misogyny. Or is it just being brutally honest at the exchange here? - The offhand use of someone to ostensibly follow climbing ambition, while at the same time enjoying the view without the need for anything in return - except for a bit of small talk and safety. (The belay bunny can get her own back by taking advantage of the situation; allowing a small amount of physical contact while firmly acting in denial that it's anything sexual – usually known as a tease, but here done ' quite innocently'. It's painful to watch the male climber in these circumstances.)

All in all, as a woman I'm glad there's this mass denial of the link between sex and climbing – so yes, I'll climb with anyone who's willing (providing they do it safely). 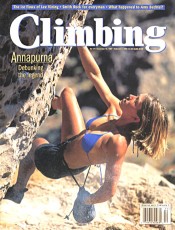 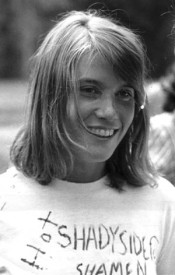 Hardonicus
10 Jun, 2009
Let me guess. You live in London and climb mainly indoors?
Mark Reeves
10 Jun, 2009
Sarah Very funny, very insightful and very enjoyable.
James_D
10 Jun, 2009
i like it, an extended version of "rock climbing is a lot like making love to a beautiful woman..."
Chris the Tall
10 Jun, 2009
According to her logbook, her latest climbs were "Dong" and "Mucky Gully" !! Excellant article
sutty
10 Jun, 2009
243 views in 48 minutes, amazing what a title can do.;-)
More Comments
Add Comment
Loading Notifications...
Facebook Twitter Copy Email LinkedIn Pinterest