Shauna Coxsey is infamous for cruising what others fluff, staying composed and smiling through the flashes and hashtagging - an incredible climber. She became the first British woman to climb 8B+ in July just a few weeks after finishing second in the World Cup circuit, is supported by the biggest name in international sportswear, acts as a trustee of Climbers Against Cancer and is organiser of the Women's Climbing Symposium.

Climbers who make a living from the sport rarely manage it without some sniping and Shauna's not been let off lightly, the community interest company; Women's Climbing Symposium being the main target. Claire Carter caught up with Shauna as she returns from Munich after coming a frustrating fourth in the World Cup Bouldering Championships. What happened, and why is she so focused on a women's only climbing event?

Claire: Hi Shauna, it's been a busy and pretty challenging year, how are you feeling?

Shauna: Hasn't it just! My feelings are mixed. I am really happy with what I have achieved but also a little disappointed in some of my performances. However, I have met some of my biggest goals this year and I guess I am still incredibly happy about my achievements. But I am also really excited to get some new goals written down and get training!

Claire: How does the World Championships differ from the World Cup series?

Shauna: It's the same format but it is a bi-annual event so it carries a little more weight. There are always way more participants from more nations than in the World Cup series too which is cool.

Claire: You came second in the World Cup series, and then became the third woman to climb 8B+, pretty incredible achievements. How do you feel about the World Championships?

Shauna: There is only one position that I would have been totally satisfied with but I guess that is the same for other athletes too. My goal for the World Championships was to climb well but I didn't achieve that. The competitions are so much more than climbing up boulder problems and there are many different aspects and challenges that can determine how well you perform. I am disappointed but I also learnt a lot at this event.

Claire: How motivating is gaining first place on the podium compared to becoming the first to achieve a technical grade or ascent?

Shauna: Both are incredibly satisfying. However, competitions are dependant on many more factors than outdoor climbing. In competitions you have to perform right there and then. On rock you can spend weeks, months or years working towards a specific climb, you can then wait until you feel great and wait for perfect conditions. For me I am more motivated by standing on top of a podium. I love the whole experience of pushing myself on rock but for me it is more of a way to test myself and have fun. I don't use grades to motivate myself.

Claire: Michaela Tracy made an incredible bound forwards in her climbing last weekend, while you have maintained a very high standard for a number of years. Do leaps forwards in performance or first ascents and grade breakthroughs just come down personal training and the individual climber or do they also depend upon the development in the sport in general?

Shauna: It was great to have Michaela in the final! I know Michaela has put a lot of hard work and dedicated training in over the past few months and that really showed in her climbing. She deserved to be in the final and I am excited for what 2015 holds for British competition climbing. I think the development of the sport plays a factor, competition climbing is much more popular now than it used to be and the sport generally is growing at a rapid rate. This however is only making it harder and harder to do well.

Claire: How do you deal with the pressure and competition from other women, it must be extremely difficult deal with comparisons?

Claire: When you first started competing how did you deal with the pressure, was it just natural?

Shauna: I don't really remember as I started competing at the age of 7. I guess I have grown up doing climbing competitions so I learnt to deal with pressure over a long period of time and my attitude as a competition climber developed as I grew up . There is actually a video of my first ever national competition and I cry my eyes out. So maybe I wasn't good at dealing with the pressure at first.

Claire: Do you think you could transfer your competition mentality to traditional climbing?

Shauna: I guess so. I am not sure I would want to though. If I mess up in a comp I get a bad result but the consequences of messing up on a trad route are much more severe. Maybe one day I will take up trad climbing, I like the idea of it. If I do I'll let you know.

Claire: What do you think non-competitive climbers could learn from trying competitions?

Shauna: There are many skills that you can learn in competition climbing that would be useful and transferable to other aspects of the sport. Competitions force you to focus at a specific time and demand you to perform regardless of how you feel.

Claire: You're running the fourth WCS in Glasgow in September, and the theme is boldness and bravery, why does this need to be highlighted in women's climbing, might it seem patronising?

Shauna: Yes it could be. But take women out of the equation and would this still be patronising? Boldness and bravery are key aspects of our sport, not just for women. Hazel Findlay is one of our headline speakers. She was the first woman in the World to climb E9, and the first British woman to climb 8c! It seems only fit to celebrate her boldness and bravery!

Claire: Who do you think manages these elements well?

Shauna: Well Hazel of course. Another one of my climbing idols Catherine Destivelle would be one person who springs to mind when I think of boldness and bravery. She pushed the limits of our sport and it one of the most influential climbers ever.

Claire: What are the risks for you of boldness and bravery? When have you found it necessary not to be bold or brave, and how do you make that decision?

Shauna: Boldness and bravery don't enter my mind often. I rarely make the conscious decision to be bold or brave. But when I think about competition climbing and the element of performing in front of thousands of people I can see how that requires such traits. I often have to make a decision to be brave and bold when rock climbing as I am easily intimidated by scary or high boulders.

Claire: You broke your leg in Magic Wood, was that just an unlucky accident or the result of misjudged boldness?

Shauna: Just an unlucky accident. I jumped off a boulder and landed perfectly but it must have already been quite weak. I don't think I have ever tested my limits with how bold I can be.

Claire: How do you think this years Women's Climbing Symposium will challenge perceptions of the event?

Shauna: The WCS has been challenging perceptions from the word go. We have faced many barriers during it's development but I think the fact that it has been totally sold out every year is a representation of it's demand and benefit to women in climbing. The WCS is not there just to highlight issues. It is a celebration of female climbing.

Claire: Michaela Tracy blogged about her new understanding and support for the WCS, why has it taken a while for some female climbers to feel comfortable abut the symposium?

Shauna: I think people are often too quick to think that their experience's in the sport are the same as everyone else's. I used to be the same. It was only when I started coaching a women's class at The Climbing Hangar that I realised that there were some common barriers that women faced in climbing. It was then that I reflected on my own experience which had been very different.

Claire: Last year the event was held in London, which obviously attracted a lot of indoor climbers, This years WCS is in Glasgow, how will the day reflect that?

Shauna: We try to get as many women from the area as possible involved and create a day that the local women feel they can benefit from. We are also really keen for women to get outside after the event. Jackie Sequira from TCA has written a great guide to local Scottish crags you can find on the WCS website.

Claire: So the work days done, as is the training, twitter is off, what would you do left to your own devices?

Shauna: Bake a cake, make a brew and get comfy on the sofa with a film.

Claire: Sound's like a rest day is in order Shauna. Congratulations on the year so far.

The Women's Climbing Symposium takes place on the 27th of September at the TCA in Glasgow with presentations from Hazel Findlay, Shauna Coxsey and Jen Randall along with workshops on sports psychology, expeditions and physio. The wall will be set for the day by Jackie Sequira, and there will be four coaching sessions on offer led by eight coaches. You can buy tickets on the Womens Climbing Symposium website, and email the organisers with any questions to womensclimbing@gmail.com. 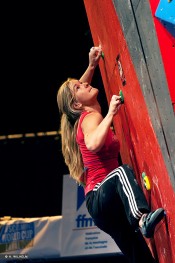 Steve nevers
5 Sep, 2014
Nice interview, although minor pint but it think Shaunas actually the 3rd woman to climb 8B+. Just not to ignore the other ladies.
jsmcfarland
5 Sep, 2014
The article says she was the first british woman to climb the grade?
Steve nevers
5 Sep, 2014
theres a bit in one of the questions which is 'so your the second woman to climb 8B+'. an amazing achievement not to be snubbed but i'm sure that she'd not want the other ladies efforts overlooked. Don't get me wrong Shaunas incredible.
jsmcfarland
6 Sep, 2014
Still don't understand your point. She is the second woman in the world to climb 8b+ and the first british woman, both of which are mentioned in the article. How is that overlooking what anyone else is doing?.......
Steve nevers
6 Sep, 2014
She is the second woman in the world to climb 8b+ No, she isn't. 1st. Tomoko Ogawa. 2nd. Ashima Shiraishi. 3rd. Shauna Coxsey. also Alex Puccio became the 4th. So the same obvious point i made in my first post. I know the article states Shaunas the 2nd woman to climb 8B+, the article is mistaken. so to clarify: Shanua Coxsey, 1st British woman to climb that grade, 3rd woman in the world to achieve that. Outstanding effort by them all.
More Comments
Add Comment
Loading Notifications...
Facebook Twitter Copy Email LinkedIn Pinterest