Chris Sharma is set to join Tommy Caldwell on his attempts on the well known 'Dawn Wall' project on El Capitan. Caldwell, one of the best big wall climbers in the world, has been trying to free climb this line for the last five years.

The team for this season now stands as Tommy Caldwell, Kevin Jorgeson, Jonathan Siegrist and Chris Sharma. Caldwell has been attempting the line since 2007, Jorgeson joined him in 2009 and Siegrist joined them last season. Now with the addition of Chris Sharma, this really is an all star team. With seven pitches reportedly in the 8c+ bracket and many more hard pitches on top of that the Dawn Wall project, which vaguely follows the aid route Mescalito, would be the hardest big wall free route in the world if successfully climbed.

Hopefully the closure of the national parks in America will be short-lived and the team will be able to have a good autumn attempting the route.

In a report on Climbing.com, Kevin Jorgeson commented:

"Tommy and I have our calendars blacked out until Christmas, and weather permitting we will be there till then. I think J-Star and Sharma have some obligations in November that will cut their season a bit shorter."

We asked Jonathan Siegrist whether the goal is to free all the pitches in one push, or if is that a later goal?:

Not sure exactly what the goal is honestly - Tommy is the goal man! We are all just slaves... ha!
I think for the meantime just to finish all of the pitches is the goal. Got three more to go...

We've covered Tommy's efforts on The Dawn Wall several times over the years on UKC, and earlier this year we published this excellent video:

Chris Sharma’s preternatural climbing ability and visionary first ascents have earned him an enduring reputation as one of the world’s best rock climbers. This American professional athlete, ambassador and...

This week's Friday Night Video is the quintessential bouldering film: Rampage. Released in 1999, it features a youthful, 19-year-old Chris Sharma roaming around the American west with friends Obe Carrion, Josh Lowell and Brett...

Whilst there are a great many 'climbing greats', few are greater than Chris Sharma. Ever since the age of 14 Sharma has been...

After Margo Hayes' ascent of Biographie (9a+) last week, I thought it would be worthwhile to look back at one of the most... 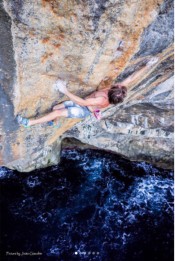 Chris Sharma has made the first ascent of Big Fish, 8c+/9a, a deep water solo/psicobloc which features a crux...

Back in June, Chris Sharma made the first ascent of the famous Pont d'Arc in the Ardèche. The route climbs...

beardy mike
2 Oct, 2013
Holy crap that's exciting. Sharma gets on a big wall... surely with a team like that it's got to go...
johncoxmysteriously
2 Oct, 2013
This is the season? I'd have thought December was not a particular El Cap season - shows what I know. They should ask Ondra along. Slightly surprised no coverage yet of Mayan G-S and [sorry, some other woman I've not heard of and have forgotten the name] lowering the female Nose speed record by the best part of two hours. jcm
SteveoS
2 Oct, 2013
If they're allowed into the valley!
Jackwd
2 Oct, 2013
Holy mother of God...
1poundSOCKS
2 Oct, 2013
T-Star, K-Star, J-Star & C-Star...what a team!
More Comments
Add Comment
Loading Notifications...
Facebook Twitter Copy Email LinkedIn Pinterest