Felipe Camargo has made the first ascent of Fortaleza, Font 8C, at Ubatuba, east of São Paulo, Brazil. If confirmed this is the first 8C in the country.

This confirmation could come sooner rather than later as Paul Robinson is on his way there right now. But then again Brazil is an absolutely huge country which will be difficult to cover in two weeks...

Felipe says that this is a dream come true and that he is very happy. It's the hardest thing he has ever climbed, but as it's a first ascent, it's impossible to be sure about the grade.

Judging from the photos, this thing is not only hard, but also a stunning line in the best possible location! 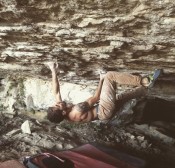