Tom described the intensity of the line, which quite clearly involved the use of every limb and body part:

'Hands, fists, stacks, knee locks and invert torpedo. One rack haul halfway and a very patient belayer needed to allow the leader to mutilate themselves by abrasion.'

The initial goal of the trip was the 180ft 'Crucifix' crack project, but the line was wet and the pair were forced to shift their focus, resulting in eight new first ascents ranging from 5.11d - 5.14a - three of which Pete managed to climb in just three hours.

Tom claims that Crown of Thorns is 'One of the few routes in recent times that both of [them] have screamed on quite a bit!'. The Boyz have history in the White Rim area, having made the first ascent of Stevie Haston's project Century Crack in 2011 (UKC News Report), widely regarded as the hardest offwidth crack climb in the world to date. Comparing the two routes, Tom told UKC:

'Overall it has harder and more technical moves than Century Crack, but it's less sustained so you're able to recover on a couple of sections. It felt similarly tiring on the body though.'

Watch a video of the Wideboyz' recce mission to Utah earlier this year: 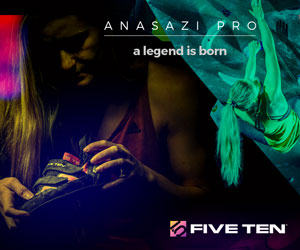 Robbie Phillips - Return to the Bridge

Tom is a trad climber at heart, whose passion for the unknown in climbing has lead to numerous new routes both in the UK and overseas.

Fri Night Vid The Wideboyz Crack on in Canyonlands

Earlier this year Tom Randall and Pete Whittaker (AKA the Wideboyz) travelled back to their favourite crack haunt of Canyonlands National Park in Utah, where they established another hard first ascent in the White Rim – Black Mamba 5.14b – whic...

Hardest Crack Line yet for the Wide Boyz - Black Mamba 5.14b

Pete Whittaker and Tom Randall have made another hard first ascent in the Utah desert – Black Mamba 5.14b – which may be their hardest roof crack yet. This latest ascent comes just days after they made the first repeats of...

Tom Randall and Pete Whittaker AKA The Wideboyz have made the first repeat of another monster roof crack, Necronomicon 5.13d/14a, in their old stomping ground of White Rim in Canyonlands National Park, Utah.

Tom Randall and Pete Whittaker, better known as the Wide Boyz are one of Britain's most prolific climbing...

Tom Randall and Pete Whittaker (known collectively as The Wide Boyz) are no strangers to hard climbing. Between them, the pair...

As a climber, if you are regularly pushing yourself and trying hard, it is likely you will get...