Dave MacLeod has completed his long-term project at the Arisaig Cave. He has decided on Lithium as the name and has graded it 8B+ in difficulty. Dave first heard of the cave after a tip-off from a friend 9 years ago, and has since spent a significant amount of time establishing first ascents in the permadry 'tunnel' cave.

The problem is a highly physical and technical rising traverse of around 40 moves, which links into his existing problem, 4th Wave 8B. The climbing involves a knee bar rest and some thuggish undercut moves to finish. After coming close to completing the problem last week – where he dropped the last hard move – Dave returned on Tuesday after a weekend's coaching in Ireland to finish it off.

Commenting on the difficulty of the project, Dave wrote in his blog:

'I have gone round in circles with the grade for a day or two. 8B+ in the UK is pretty tough. I am not certain this is a grade harder than some of them, nor have I done enough of them to know. So since I am not sure, I'll just go with 8B+. I also completed the project quicker than I expected, a sure sign that it is easier than my initial expectation.'

Despite this, Dave continued:

'Going by Magic Wood, where I have done a lot of my boulder repeats in recent years, Lithium is definitely harder than New Base Line 8B+, Shallow Water to Riverbed 8B+, Mystic Styles 8B+ and definitely harder than Practice of the Wild 8C. It feels similar in difficulty to In Search of Time Lost 8c which I tried for two sessions at the end of my last trip and got good links on. But perhaps it is easier than The Understanding 8C which I tried for 30 minutes but couldn't do. By this logic perhaps it's nearest easy 8C. But again, perhaps the UK has stiffer grading. Whether that is right or wrong is another argument. The bottom line is that it's very hard to reduce grading to an entirely rational calculation. I just don't do enough bouldering to have a good handle on grades.'

Dave also reckons that the problem plays to his strengths, being steep and technical with rests. Regarding his current form in bouldering and climbing in general – despite suffering with severe ankle injuries and a leg break late last year – Dave puts his fitness down to managing his work/rest balance better and watching his diet.

As Spring approaches, Dave now has his sights set on some Scottish trad projects.

Read more from Dave on his blog here 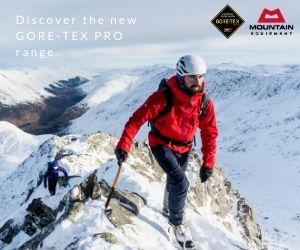 Salute to the Admiral - The Story of Wreckers' Slab

While there's been plenty of top-end British ascents this past week, it's a been a quieter week for interesting ascents abroad. Here's a round-up of some recent sport and multi-pitch action...

Dave MacLeod has had another vintage year. As always, he's been hard at work developing new routes all over Scotland; he...

This week's Friday Night Video covers Dave MacLeod's 2010 ascent of The Indian Face, on Clogwyn Du'r Arddu (Cloggy). The film was featured as an extra on Hot Aches Productions Long Hope DVD and tells the tale of Dave climbing the worlds most notor...

Dave MacLeod has climbed Gutbuster (8B+) at Dumbarton, originally put up by Malcolm Smith in September 2008. Dave first began trying the problem in 2007, although moved to the highlands shortly after. The problem climbs a link section across a roof into...

Shani
28 Mar, 2017
Well done Mr M!
alx
28 Mar, 2017
Well done Dave! The grading logic is confounded...He is happy to say it's harder than the 8B+ & 8C's he has climbed and taken the grade for and it's easier or similar to 8C's he has not climbed. So either it's 8C and Dave's past ascent are on the grade or it's 8B+ and his past efforts in Magic Wood are all soft/inflated grades. I propose the answer that Dave doesn't actually know how really strong he is and praying at the temple of waddage has borked his frame of reference :-)
Kevin Woods
28 Mar, 2017
I suspect it's alluding to the well-known elephant in the room that the two work on a slightly different spectrum. All in all, an incredibly modest but well-reasoned decision on Dave's part, as far as I can tell. It looks like an immense piece of climbing. Can't wait to see the video of the final thing.
La benya
28 Mar, 2017
'Shallow Water to Riverbed 9B+'... Bloody hell, has someone told Nalle he's been outdone already?
alx
28 Mar, 2017
I agree it's a valid point, I guess the rub is that Dave didn't need to mention it at all, he could have said, hard 8B+ needs a repeat to be confirmed.
More Comments
Add Comment
Loading Notifications...
Facebook Twitter Copy Email LinkedIn Pinterest