Jacopo Larcher and Barbara Zangerl have both managed to free a long standing project at the Cippo crag near the village Gondo in Switzerland. The project was bolted by A. Manini and M. Pellizzon almost 15 years ago, and since then it had been an open project.

From Jacopo's fb: As its name says, it follows an obvious crack which you can also be protected with trad gear. Maybe it's not as safe as with bolts, but for us it made more sense to climb it in this way,

We called it 8c (or 5.14b R). The bolts are obviously still there, so you can choose the rules of the game you want to play. You should go and check it out: it's really cool!

The route is around 15 degrees overhanging and has a crux which Tom Randall describes as: A single, shallow finger in a tiny slot to make a full length move to the next jam. Think 1-4-8 on the campus board. After this, you take a small gaston, slap to a sloper, then reverse your finger into a "Cobra-style" undercut mono move.

Build your feet and then pull off a total max body length move to a three finger edge. At this point you're desperately wanting it to be all over, but from here you have to single arm deadhang the edge (I've been telling people for years that one arm pull ups are useless and then I find one!) and do what feels like a one-armer on it as the foot hold is so poor.

Tom worked on the project a couple of years ago and writes about it in his excellent blog.

Barbara says that ...it felt hard and pumpy to place the gear and it was quite a mental challenge to climb the crux quite far above the last piece of gear.
Super psyched to push my personal trad climbing limit a bit further. 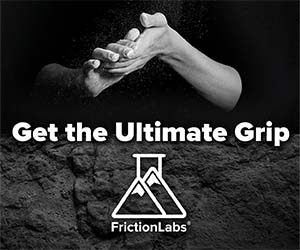 A variety of climbs on different mediums this week: rock, ice, snow and...concrete.

Hard trad at home and overseas, plus a new 9b...

Jacopo Larcher and James Pearson sit down and discuss Tribe, a route that...