Shauna Coxsey has qualified in 1st place for finals on Tuesday after the Combined qualification round. In an exciting twist, due to the fact that Japan has 4 athletes qualified for the Combined final but can only take 2 Olympic spots, all 4 athletes from other countries in the final plus the 9th and 10th place competitors are guaranteed an Olympic ticket for consideration by their National Olympic Committee. Shauna qualified in 1st after placing 14th in Speed, 1st in Boulder and 3rd in Lead.

The first 7 female Sport Climbing Olympians in Tokyo 2020 - pending selection by their respective NOCs - will be (final ranking order to be decided in Tuesday's final):

Shauna placed 14th in Speed, 1st in Boulder and 3rd in Lead to qualify in 1st place. Her reaction on Facebook was one of disbelief:

The battle for the two hotly contested Japanese places in the women's event will be between Akiyo Noguchi, Ai Mori, Futaba Ito and Miho Nonaka. Watch the women's Combined final live on Tuesday from 7:20am UK time.

Stay tuned for Charlie Boscoe's Combined report, and some comment from Shauna...

We caught up with Shauna Coxsey at Kendal Mountain Festival where she was presenting her new film The Wall and interviewing Ned Feehally about his new book Beastmaking. We talked about her experience before, throughout and dur... 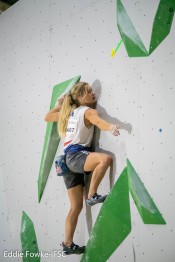 The finals of all three individual disciplines and the Combined finals at the 2019 IFSC World Championships in Hachioji, Japan will now be livestreamed on BBC Sport online. Shauna Coxsey and Nathan Phillips will both...

Brilliant stuff. To finish ahead of Janja in the Difficulty comp surely must have impressed even Shauna herself!

It is interesting that she would have dropped to third place with the second and third placed climbers each moving up a place if the scoring had been addditive rather than multiplicative. This seems very arbitrary. What is the rationale behind the multiplicative system? A brief play with the maths suggests that it tends to favour less consistency when two climbers' placings have the same additive score, so is the idea to favour climbers with one particularly strong discipline even if another is a bit weak?

It seems to me that additive would have been a better way to do this. As it is, the winner is almost certain to be be someone who's brilliant in one discipline and so-so in the other two, instead of someone who's pretty good in all three.

Having said that - thinking out loud - I'm considering this as if all three scores are independent. I wonder if actually boulder and lead scores are relatively well correlated, and speed is less well correlated with the other two?

Yes, I think it is exactly designed to ensure that whoever does well overall will have done well in at least one of the disciplines. If the scoring was additive then there would be the possibility of someone doing averagely in each discipline then doing well overall. I personally think the former is how it should be.

Isn't that effectively the system used in Formula 1?