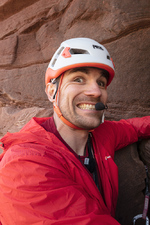 Jesse is a member of the GB Paraclimbing Team in the Visually Impaired category, B1. He is a skilled and experienced climber across all disciplines despite his disability.

Jesse suffers from Rod-Cone Dystrophy, a genetic condition leading to damage to the light sensitive area in the eyes. Consequently it is not corrected by wearing glasses and has affected him since birth. The condition is degenerative, he was born with approximately 20% of central vision (no peripheral vision) with large blind spots, the quality of the image he could see was extremely poor and he was totally blind in low light conditions. Jesses vision has deteriorated to a point now where he can’t make out any image or text anymore and is down to only having light perception. As a result of his eyesight he is now no longer able to read and consequently uses text-to-speech software in order to use a computer and to work.

Despite his extremely poor eyesight, Jesse is a keen climber and mountaineer, starting at a young age and rarely turning down an opportunity, he is experienced in all climbing disciplines. He feels his way up routes and is assisted by Molly, his trusty partner, route reader and sight guide.

It was only in September 2017, that Jesse and Molly first heard about Paraclimbing as a competitive sport and 3 days later they found themselves booked into an Air B&B in Edinburgh, preparing for their first competition. Gaining a podium position here was incredible. Following further great performances in the 4 national Paraclimbing competitions late 2017, Jesse was selected to represent the GB Paraclimbing Team at a selection event in Sheffield in Feb 2018. An amazing achievement! This is when the hard training began…

View the reviews and news from Jesse's sponsors.

GB Para climber Jesse Dufton has led the Old Man of Hoy – an extraordinary feat considering he is blind. Jesse led all six pitches of the classic East Face Route (E1 5b), placing his own gear and described it as 'the most adventurous hard Trad roc...

"The Fast Alpine 40 is Montane's very decent stab at making an all-round pack for the British mountaineer", reckons Toby Archer

With its excellent active cut and well-considered set of features, the Prism is a superb light synthetic insulated jacket at a price...

From Norwegian ski touring to the grit, Toby Archer tests a summery combination of windproof top and light...

Whether you're approaching a mountain crag or out on a scramble or via ferrata, an approach shoe will be lighter and more nimble than a boot,...

We're just back from the annual summer gear-fest that is the OutDoor trade show. As Europe sweltered in the heat the world's outdoor industry gathered in Munich to network, drink beer and showcase their shiny new stuff. For us it's a great opportu...

We're just back from the annual summer gear-fest that is the OutDoor trade show. As Europe sweltered in the heat the world's outdoor industry gathered in Munich to network, drink beer and showcase their shiny new stuff. For us it's a great...

Production of BMC themed Terra and Terra Ridge pants are released to celebrate Montane as the Recommended Clothing and Pack Partner of the British Mountaineering Council (BMC) – and to commemorate their excellent work in...

A look at Montane's new Summer Range, with some updated classics alongside innovative new products.

New for this season, Montane have updated their iconic Fast Alpine climbing pack to increase usability and...

Saurus is an all new trail running shoe which excels on off-road footpaths and routes which feature a mix of hard paved surfaces...