10 Multi-pitch Routes Worth Travelling For Part 1

ummer is here and it is time to get organised for a climbing trip. With this in mind I got the collective brains of the UKC forums, Facebook and even real life friends together to make a list of ten of the very best mid-grade routes in Europe. My only stipulations being they had to be multi-pitch and no harder than 6c+.

I haven't actually climbed all of the listed routes in these two articles - but I have it on good authority that they are some of the best climbing adventures in this continent - so no more chat - lets see the routes!

Here's the link to the next 5 routes: PART 2

A real summer holiday route and destination this one. The individual route we've gone for is Klin, on the north face of the impressive 350m Anica Kuk in the gorgeous limestone gorge of Paklenica, Croatia's major climbing spot.

If the huge face of Anica Kuk isn't quite what you are looking for, or a 350m 6c+ is a bit too hard (or easy) then the rest of the  Paklenica Gorge offers around 400 routes of all grades, from single pitch to 350m, in sun or shade, and it is close to the beautiful Adriatic Sea. It's not alpine, in fact it is low altitude, pretty roadside and damn hot in the summer. Sounds good to me!

Have you ever been to the Picos de Europa? It's in northern Spain and it has a little bit of limestone...

The stand out mountain is the stupendous peak of Naranjo de Bulnes, which has some amazing and intensely steep faces, home to some of the hardest multi-pitch routes in the world, but the slightly more amenable ??? has a classic 5 pitch Hard Severe.

The belays are equipped, but the route is traditionally protected, follows a line of perfect limestone, and is in one of the most stunning parts of Spain. Benidorm this is not.

The area is high, the summit of Naranjo de Bulnes is 2519m, and can have snow, so this is usually a summer destination. The approach is 2-3 hours to reach the Vega de Uriellu (mountain hut) and a further 1.5 hours from the hut to reach the South Face.

It's one of the shortest routes in the list, and it had people arguing that's for sure, but Jack The Ripper was suggested by several people independently as being one of the best mid-grade routes in Europe - do you agree?

Stac Pollaidh is a stunning and wild mountain in the north of Scotland. If the route we have chosen seems quite short, you must factor in the remote feeling of the area, the arctic landscape, the wind, the true beauty of traditional climbing in the UK.

The Torridonian sandstone that makes up the rocky summit ridge of this mountain is around 500 million years old and climbing in this area is a special experience, very different from the heat of the Paklenica gorge mentioned above. There might be a higher chance of rain here too!

It is a climber's dream - that perfect spike, how a child draws a mountain. The  Aiguille Dibona has just got to be climbed and one of the best routes is the Madier.

Situated in the Ecrins of France, the Dibona is reached by a pleasant three hour walk to the hut near the base of the mountain, and usually there follows a mad dash in the morning to be one of the first teams on this admittedly popular peak.

But it is popular for a reason, with perfect granite, easy access and generally fantastic weather. The altitude of the top is 3130m making this an ideal mid-summer objective. And why not partner an ascent of the Dibona with a quick trip to the nearby granite-loaded village of   and make a real holiday of it!

It's number six on the list, but I think it is my personal favourite. I love granite, I love the Alps and I love Italy, so this route was kind of designed just for me. It's actually two routes stacked on top of each other, split by a huge ledge, but hey, lets go the whole hog and do them both together to make a 19 pitch whopper!

Val di Mello is just an amazing place, with all sorts of climbing, from big walls to boulders and of course the now very famous Mello Blocco bouldering event. Is it only me who thinks that this would be the worst time to go - when there are 2000 other climbers?!

Any way, these two routes at E1 and E2 respectively offer perfect granite in perhaps the most beautiful part of Europe and the drive from Milan isn't that bad either at about 2 hours. The pretty village has camping, pizza and single pitch routes on giant boulders, and the bigger routes are an easy walk to access.

It's one of those just sub alpine valleys - hot in the summer, freezing in the winter, so the best time to go is probably early summer or autumn, but mid summer would work fine too if you can take the heat in your rock shoes..! Go - you won't be disappointed.

YES! We really have saved the best until last... so don't miss the next top five Multi-pitch Routes, all good enough to base a holiday around. Now who's got some holiday allowance left over...

Here's the link to the next 5 routes: PART 2

Jack Geldard is the Chief Editor of UKClimbing.com and has climbed extensively for over 20 years - trad, sport bouldering and winter. He's currently training to be a British Mountain Guide (IFMGA)

He admits to having never done Jack The Ripper, so if it is crap don't blame him, and he's got at least one of the routes on this top ten list in mind for his summer holidays and will be gutted if it is really busy... did he say top ten? Wait, he meant top nine... 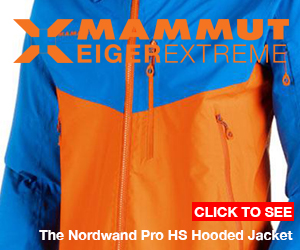 A Guide to Climbing Trips in Europe by Train

As Climbing Participation Grows, Routesetting Must be Inclusive

Michael Gordon
5 Jun, 2015
Jack the Ripper is a very odd choice. It's a good route and of course the NW is amazing, but it's only 3 pitches of which only the final one is anything special. There are a good number of much better E1s in Scotland, let alone 'one of the best routes in Europe'! And 'remote'? Got to be one of the shortest walk-ins for a hill crag in Scotland!
CaelanB
5 Jun, 2015
well i absolutely love jack the ripper maybe my favourite scottish route i've done, but i agree it seems an odd choice seeing as how short it is and i was also expecting by travel you meant more like getting on a plane to climb, so under that criterion it's not that far away. My perception maybe skewed a little seeing as i live in the north of scotland anyway
Robert Durran
5 Jun, 2015
Yes, including Jack The Ripper is a joke - good route, but wouldn't even make the top 100 in Scotland. It means I can't take the rest of the article seriously. I've never heard of any of the others, so certainly wouldn't risk travelling for them on the basis of this article.
Neil
5 Jun, 2015
After a few years away from climbing it's funny seeing pictures of a pitch and suddenly a whole route/day/trip comes rushing back into memory. Kundalini/Luna Nascente linkup - fantastic day! Thanks for reminding me!
Red Rover
5 Jun, 2015
Would be good to see something from Norway, it's probably the country in Europe with the most rock* but the worst weather. *impossible to verify
More Comments
Add Comment
Facebook Twitter Copy Email LinkedIn Pinterest