The video below was an instant hit and captured the imagination of climbers around the globe.

Arnaud is amongst the world's most experienced climbers, having travelled extensively with his partner Stephanie Bodet, visiting big rock walls in remote places for many years. As well as his adventure climbing, Arnaud is a former World Cup competition winner and an 8c+ sport climber.

Jack: Ceüse is not known for traditional climbing, so what made you think of trying this style at such a famous sport cliff?

Arnaud: For the past few years Stéphanie, Sylvain Millet and I have been thinking about climbing on trad at Ceüse. At The Grande Face, there are some cracks which have been climbed with nuts a long time ago. But on the compact walls, the rock always seemed too featureless to climb on natural gear. So we became a bit disheartened with the idea. But this winter the idea of Black Bean came to me, the tufas, the pockets that I remembered (I climbed the route 2 years ago) made me think it might be possible; I was not sure that there would be enough protection and if I would have the mental strength for it. It was perfect to be excited by a new challenging project... Once the winter snow had gone I hiked to the top to abseil in and check the route.

Jack: Is Black Bean suited to traditional climbing? Or are there other routes at Ceüse that would be better protected?

Arnaud: Actually at Ceüse very few routes would be better protected. That's why it's really magic that this beautiful 80 metre wall at Ceüse is possible with natural protection. And the climbing is really unique, with some long overhang, beautiful climbing, one of the best routes in the world at that grade. Of course the truth is that this route would have been more incredible to work and to climb without the bolts, but they are here and for me the compromise is really worth for it to climb Black Bean on gear.

Jack: You already mentioned that you are looking for some projects at Ceüse that have not already been bolted - have you found any?

Arnaud: Not yet. It would be amazing to find some, but it's not easy. Ceüse has been developed a lot and as I said the rock is not very friendly for natural gear, less featured than the Marmolada for example, and you also have to be more careful in limestone with cams. Sylvain Millet has climbed a new multi pitch line ground up, mostly on gear, with a couple of bolts, and I don't think it's possible to skip them. I still hope there will be true trad climbing here and not only "French trad climbing" as I did...(I mean trad climbing with bolts around!)

Jack: What do you think about possible damage to tufas from traditional gear?

Arnaud: On Black Bean, the tufa where I put the two pieces is fragile but I don't think the cams would break it, maybe just a little part if they slip. Of course you try not to put protection where it can break the rock because you really need to trust your pro. Anyway some holds break even with climbing, and the routes are also damaged by over use.

Arnaud: Not climbing it, but before, yes. I am definitively not a specialist on dangerous climbs and it was a real challenge for me.

Jack: It's an 8b route - what is your current top level? Did you have a lot of reserves on Black Bean? Or was it physically hard for you as well as mentally?

Arnaud: When I am fit, I am able to climb an 8c in few tries. That's not high compare to today's standard, but that's my form level now.

I am sure Black Bean on gear is not a super hard challenge for young and talented guys.

For sure the problem for me was not to be able to climb the route but to be mentally strong enough to accept the commitment, the small solo at the start and in two sections, on the traverse and to the top, where it's better not to take a fall.  Twice I walked up to the cliff and decided not to go, I didn't feel it. Physically it's logically harder too, you have to climb with the weight of the whole gear, it's not like clipping draws! You have to place the gear, it takes energy, and the crux is harder because of the purple cam that takes up space in the hold.

Jack: You have travelled the world climbing some of the most amazing walls, which area captured you the most?

Arnaud: I really like Taghia in Morocco. The place, the landscape, the steep limestone walls. Madagascar or Trango in Pakistan are incredible places to visit in a climber's life, but the most impressive place I have been is the Angel Falls in Venezuela. At the bottom you feel very small, and also that you won't be at the top very fresh and very quickly...

Jack: You have been climbing for some time, and have also climbed a lot. What do you look for in climbing these days to keep motivated?

Arnaud: What really makes me psyched is to open new routes on multi pitches. Equipping from the ground, wishing to find a dream pitch is what I like the most. I like it a lot even if I think I will only open one route each year as I like to take time to find a great line and also because it's really tiring. As we have done lots of expeditions where you don't climb so much, now I am motivated to just climb, sport, bouldering, or cracks. Variety, new places and new ideas keep me motivated. Otherwise what is hard now is that at 40 years old you discover that climbing is a tough thing, really demanding for the body, and that some projects will always be too hard for me. I am thinking of Biographie for example.

Jack: Who or what inspires you in climbing at the moment? Which ascents are most interesting to you?

Arnaud: I am very impressed by the way Nico Favresse and his friends are attempting big walls, light, pure free climbing style.

I have a lot of admiration for the English spirit, it's very inspiring. Thanks to all this tradition some incredible ascents had been made, when Leo Houlding nearly on sighted El Nino on El Cap a long time ago, it was superb to see. Another example: in France or Spain, nobody would have even thought to try to free climb the Angel Falls as John Arran did. There is a true spirit of discovering new places in England. Otherwise I am inspired by everyone who is able to forget their tiring every-day-life-obligations to focus on the project of the moment, whatever their climbing level.

Jack: Have you done much traditional climbing in the UK? If yes, where? If no, would you like to? Any specific routes?

Arnaud: Unfortunately I have been climbing only twice in the UK, in 1996 and a short time in 2006. In 1996 I tried "Strawberries" on sight but was not experienced enough to do it; on bolted routes I was going very well - I tried "The Very big and the very small" - the 8b+ slab in slate, but I destroyed my shoes in two attempts. I would like to visit Pembroke one day, the rock looks great. And again to North Wales to have a look at the "hardest 8a on earth", The Groove of "The Quarryman", with my tiny arms, it should be very hard!

About the grit, I really don't think I have the mental to visit hard stuff, when you are not living in the place you have to be very strong and determined.

Jack: If there is one route in the world that you wish to climb, in any style, what is it?

Arnaud: If I wasn't so bad at dyno-ing, so scared with water and if I was able to climb 9a+ or 9b, I would love to climb Es Pontas! More seriously, climbing free the east face of Fitz Roy as Nico Favresse and Sean Villanueva did this year is one of my dreams.

Devoluy - A Stone's Throw from Ceuse 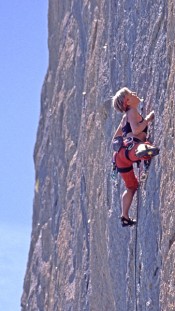 Mystery at the Shelter Stone

Climbing for the Conditions

Polish Scouting in the UK - My Route into the Outdoors

Crag Notes: In the Moment

Chris Craggs
21 Sep, 2011
Stunning effort. What make are the cams he is toting, they have a rather odd looking curve to them? Chris
Hardonicus
21 Sep, 2011
OhMYGODWENEEDANEGRADEPEOPLE!
Reach>Talent
21 Sep, 2011
Isn't he sponsored by Totem cams?
metal arms
21 Sep, 2011
http://www.totemcams.com/content/index.php?id=1&se=3
JLS
21 Sep, 2011
Nice interview. I think I like him. Seems like he's out there doing great stuff yet at the same time very self-aware of his own limitations."I am inspired by everyone who is able to forget their tiring every-day-life-obligations to focus on the project of the moment, whatever their climbing level." - Good answer.
More Comments
Add Comment
Loading Notifications...
Facebook Twitter Copy Email LinkedIn Pinterest