In this video from Wild Country, we see Jordan Buys climbing the very hard 8b+ Cry Freedom, at Malham Cove, Yorkshire.

Jordan is a very accomplished all round rock climber, with hard trad, sport and bouldering ascents to his name. In the interview below, we find out a little more about him, and what kind of climbing he does.

Wild Country: Jordan, how many years have you been climbing and when did you start?

Jordan: I'd say it's about 15 years since I started and I started when I first met Naomi and her brother Joel through mutual friends and they took me out to the crags and also to a local wall in Burnley (that no longer exists) but yeah, and got hooked that way really.

Wild Country: What about your favourite types of climbing and have you got some favourite routes and boulder problems in each of those?

Jordan: I'd say my favourite tends to be dictated by the seasons ... you know, in the winter, gritstone bouldering or trad routes and maybe even some limestone bouldering if it's dry. And with the gritstone, as I say, things that really made an impression on me were things like Widdop Wall, originally E10 and the E9 I did French Duke, at Earl Crag - which I don't know if you know? And then on the gritstone bouldering front, I'd say things like Chabal, at the Gorplestones, it's an absolute under-rated classic and it should be on everyone's ticklists. In the summer season, sport climbing, I'd say I seem to sort of get bitten by that bug - last year I think it was, True North, that was quite an important milestone for me, the first 8C, and this year Cry Freedom; one of my favourites because it was so hard and such a change from my style, that yeah, it definitely made an impression.

Wild Country: You climb a lot with your wife, have you always climbed together, and is it a good thing?

Wild Country: As someone who climbs on the gritstone as well as hard sport redpoints, how does a headpoint pressure compare to what you feel before a hard redpoint and how do you deal with the pressure of both?

Jordan: I think they're quite comparatable, both of them, bar the fact that headpointing, you generally are going to do it, you wouldn't set off on a headpoint not knowing that you didn't stand pretty much a one hundred percent chance of doing it. There might be the odd route where the crux is well protected and you know you'll perform better on lead which is actually a case I always find myself in. And I suppose sometimes it's the same with sport climbing – that I can sometimes be working something and get absolutely nowhere with the moves or I'll link sections but I don't really have the heart to do it in one but when it comes to the redpoint it all comes together. So I think the headpointing I've done in the past has definitely helped for hard sport, just being really relaxed and not over grouping, it's really useful in both dimensions really, headpointing and redpointing.

Wild Country: Climbing heroes, who are they and why?

Jordan: From back in the day, I think of people like Moffatt and Moon, who always get a mention but I think heroes are the ones that are a bit closer to home, that you have interaction with. So when I first started climbing with Naomi and her brother, we'd go to the local wall and they were all Burnley boys there, really impressive actually, the likes of Jerry Peel and that bunch were good because they were getting out there and doing it and you got to climb with them and learn from them, so that had quite an impact.
And then when I got a bit more into the hard core scene, people like Vickers and Parry were good because, again, I got to learn from them and hear about what they'd done and not all the stuff that you read about in the magazines. But more on a personal level and you get inspired by what they've sent and what they're going to be doing and, yeah, that makes them quite important in shaping my climbing life.

Wild Country: Who's the best climber you've ever climbed with and why?

Jordan: I'd have to say Ian Vickers because when you climb with him, he's got really strong arms!

Wild Country: What's the best and what's the worst thing that's happened to you in climbing?

Jordan: I'd say the best thing that's happened is the opportunity to go away to places, in this country or abroad, that not many people will see and even if they do see it, it's like a high tourist site but as a climber you get to get right in there at the bottom of it and see a beautiful place from a whole different angle.
The worst thing is probably picking up injuries, which mean you become a bit bitter about the lost opportunity to go climbing but then you get the rough with the smooth, don't you, and you can use that time to develop in other areas of life.

Wild Country: Training - how much, how often and hard do you train?

Jordan: I'd say I do two to three days a week training, maybe two to three hours in the actual session and I try to keep it quite hard because I want to progress but I don't want to get too tired that it affects me at the next opportunity I get to go climbing. And I find training at the crag quite good actually at the moment. So say if I'm redpointing but the conditions aren't quite right, I'll go and do laps... just to feel like I've done something and that way I'm not sort of beating my head against the wall with bad conditions... but I think it is key to just do little and often and just focus on the bits that you haven't already worked on when you've been climbing in that session or the last few sessions.

Wild Country: Work - how do you hold down a full time job and still climb to such a high standard?

Jordan: Well, the work I do is quite physical, so that's good training I think but I try to save a little bit of energy to go climbing – and I think anybody can climb at a high level, it's just that when you get the opportunity to go climbing, give it everything because it's what's got you through your day at work, isn't it, and when you get there, don't be miffed if things aren't feeling a hundred percent, just give it your all and, yeah, you can just climb really hard.

Wild Country: Moffatt or Moon?
Jordan: Can I have them both?

Wild Country: Boulder or sport?
Jordan: At the moment, Sport.

The photos in this article are from Alastair Lee's UKC Photo Gallery. Alastair is of course the man behind the top class film company Posing Productions. Thanks Alastair! 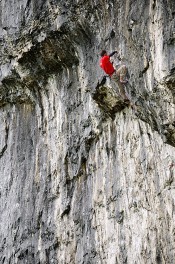 To Be a Climbing Mum, or Not to Be?

Dan_Carroll
16 Aug, 2012
fantastic clip. read the interview first not realising the audio was on the video.. would have been better left off. great to see such an iconic route.
Tom Briggs
16 Aug, 2012
Agreed, reminds you how world class Malham is. Though I was surprised at how close to the final hard move the chain was - have never seen anyone on Cry Freedom before.
andi turner
16 Aug, 2012
Jordan, he's my hero.
UKB Shark
16 Aug, 2012
Its heroic the way him (and Naomi) have kept the faith turning up at Malham this year whatever the conditions and cranking it out. He deserves to get the big one. Can't be far off now..
madmats
16 Aug, 2012
Just out of interest, what's his job?
More Comments
Add Comment
Loading Notifications...
Facebook Twitter Copy Email LinkedIn Pinterest