Man of the moment Dave Barrans (UKC Interview) has become the first member of the British Bouldering Team to stand on a podium in a World Championship, taking third place and a bronze medal at the recent competition in Xining, Quighai China.

28 year old Barrans topped out on all four of the final boulder problems and was only narrowly beaten by Russian competitors Alexey Rubstov and Rustam Gelmanov. The Russians also topped all problems, but took less attempts than Barrans.

"Dave's Bronze is even more impressive when you consider that he had to contend with a bout of food poisoning after the qualifiers and was still feeling the effects in the semi final." commented Nick Clement, British Bouldering Team manager.

Following this superb performance and his other recent strong competition results, Dave Barrans is now ranked 11th in the world.

Barrans was one of only three British climbers who were entered in to the championships, the other two being Adrian Baxter and Diane Merrick. The low turn-out could be attributed to the considerable expenses incurred by team members who have to pay for their own travel to these events.

Barrans was lucky in that his travel was covered by his sponsors; Beyond Hope (the UK distributor for Evolv, Prana and Metolius) and the Manchester Climbing Centre.

"Dave has been producing some great results this year, and Beyond Hope were happy to cover his costs for the World Championship to allow him to be one of the few British climbers to compete in Qinghai. We're all really pleased for Dave, a great achievement, especially given the strength of the other competitors." commented Mike Lloyd from Beyond Hope.

Although Adrian Baxter is officially in the lead climbing team, he also entered the bouldering competition and placed 45th. Diane Merrick finished in 38th place in the women's bouldering event. Only Baxter represented the UK in roped climbing but he failed to place high enough to get through the qualifiers.

Podium places for UK climbers have been rare events over the years and no UK climber has ever officially made a podium place in more than one discipline, although according to Graeme Alderson, Ben Moon virtually did back in 1991:

"Technically no Brit has podiumed in 2 disciplines, although I will let you have Ben Moon for a bronze in speed years ago, plus he finished equalled 2nd in lead in Innsbruck in 1991. But he was disqualified, along with others, for refusing to go on the podium after a dispute about the results." commented Alderson in the UKC Forums.

However these days British competition climbing is on the up and Barrans' excellent result is the culmination of a superb season for the British Bouldering Team with a number of top 10 places in international events:

The bouldering event at this year's world championships was won by the Russians, with 20 year old Alexey Rubtsov winning the men's category and 25 year old Julia Abramchuk taking first place in the women's.

Alexey has only been climbing for three years after starting the sport when he entered the Moscow Aircraft University back in 2006. Both Alexey and Julia train in a small private facility called Cherepaha (tortoise) in Moscow. Julia has been entering international bouldering competitions since the age of 15. (You can read an interview with her in English on Mountain.Ru.)


Dave Barrans is sponsored by Prana , Metolius , Evolv and the Manchester Climbing Centre

Thanks go to Nick Clement (Team Manager), Graeme Alderson of The Climbing Works, Anna Piunova of Mountain.Ru and Mike Lloyd of Beyond Hope for their help with this report.

Dave Barrans will be competing alongside many of Britain's top climbers at the British Bouldering Championships at Cliffhanger next weekend.

Japan dominates the World Cup, Ramsden and Miller, and Will Bosi crushing

BoB2018 has been and gone - another explosive event in the Depot Climbing Calendar.This Saturday we held the 8th iteration of our hugely popular competition in The Depot Climbing Centre, Manchester. In previous years we have seen the best British climbers (and...

The 2018 British Bouldering Championships took place at Devonshire Green, Sheffield last weekend. A huge crowd gathered to watch the UK's top bouldering stars, as well as a number of online viewers via the BBC Sport livestream - an exciting...

At 5pm tonight you can watch Leah Crane and Dave Barrans in the semi finals of the European Bouldering...

Over the weekend, the annual British Bouldering Championships (BBC's) were held at The Climbing Works in... 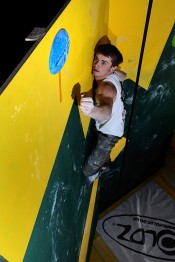 The CWIF mens champion is Dave Barrans, and female winner is Shauna Coxsey. Both put in strong displays with Shauna being...

Dan_Carroll
7 Jul, 2009
bumping not allowed then? bloody good effort, well done dave.
Tom Briggs
7 Jul, 2009
Brilliant effort, though the report says "Dave Barrans has become the first member of the British Bouldering Team to stand on a podium in a World Championship". What about Mark Croxall's win at the NEC in 2005? That was the World Bouldering Cup... is that different from the 'Championships'?
Graeme Alderson
7 Jul, 2009
The World Cup is a series of events every year. The World Championships is a one off event every two years. Both Mark Croxall and Andy Earl have won rounds of the World Cup.
Tom Briggs
7 Jul, 2009
Ah ha. Thanks.
PeterM
7 Jul, 2009
Fine alliteration too ;-)
More Comments
Add Comment
Loading Notifications...
Facebook Twitter Copy Email LinkedIn Pinterest