Edu Marin has made the second free ascent of Beat Kammerlander/Adam Ondra's WoGü, 8c Multi-pitch, at Rätikon in Switzerland.

The route was opened by Beat Kammerlander together with H. Schleichl and P. Mathias in 1997 and named WoGü as a tribute to Wolfgang Güllich. It then took until 2008 before a 15 year old Adam Ondra could make the first free ascent.

Since Adam's ascent no one has been able to repeat it. Nalle Hukkataival came close last year and wanted to make a new attempt this year, but the weather didn't cooperate and he had to leave.

Now, Edu Marin has finally made the coveted second ascent. This is what he wrote on facebook/Instagram:

Yesterday I achieved the first repetition of "WOGÜ" the Monster of the Alps!!!
Eight years have passed since its first free ascent by Adam Ondra in July 2008.
A nice and hard process in which I've been submerged for nearly two months. The conditions in August were not the best: rain, moisture, heat, etc ...
Perseverance, constancy, humility and motivation are some of the keys to unlocking this amazing line opened by Beat Kammerlander in 1997 in honor of Wolfgang Güllich.

Without you father this would not have been possible. Thank you for your patience and for calming the beast. Thanks Marc for your positive energy!!
This is also yours!! Dream Team!!!

Edu has climbed at the highest level from a very young age, red-pointing 8c at fifteen; on-sighting 8b+ at sixteen and climbing 9a at seventeen. He has climbed routes of 9b and achieved World Championship...

Edu Marin has climbed his long-term project in the cave of Getu, China. His aim was to establish a route from the bottom to the top of the cave, which boasts 304m of roof climbing. The route is 14 pitches long and its hardest pitch is 9a+, making it... 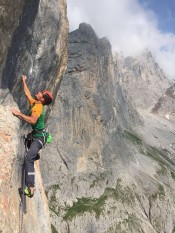 This summer, Edu Marin made the 2nd free ascent, after Adam Ondra, of Beat Kammerlander's WoGü, at Rätikon in Switzerland.

In November this year, Spanish climbers Dani Andrada and Edu Marin made the 4th and 5th repeats respectively of Chilam... 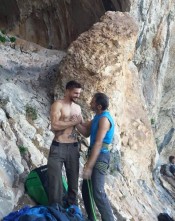 In this video we see super strong Spanish climber Edu Marin in action on Pengim Penjam 8c. As well as onsighting four...