In the men's event, Alex Megos reigned supreme on the technical, crimpy headwall, just failing to latch the finishing jug to claim his first ever Gold in an IFSC lead event. Romain Desgranges (FRA) and Domen Skofic (SLO) weren't too far behind, at 42+ and 43 respectively.

Following her first win in Chamonix the previous week, Jessy Pilz (AUT) was a strong contender for the top spot in Briançon, topping the final route with ease. However Slovenian superstar Janja Garnbret got back into the swing of her winning routine and also topped, taking the win on countback to the semi-final, which she dominated by 5 extra moves ahead of Jessy. Anak Verhoeven failed to latch the finishing hold to place third. 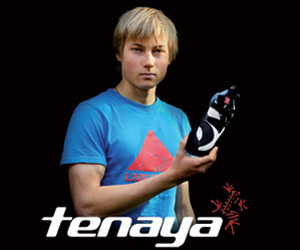 Ondra falls off a 7a

Alex has risen quickly through the ranks of German climbers to become a globetrotting superstar of the modern climbing scene. His phenomenal sport climbing achievements place him as one of the most important climbers of...

Our Friday Night Video this week is a feature-length documentary about the sport climbing superstar, Alex Megos. The film looks at where the limits of sport climbing are currently, opening with Alex musing that Sharma's Jumbo Love (9b) should be f...

Rotpunkt is a new film from Patagonia chronicling Alex Megos' success over the past few years. Alex rose to fame in 2013 with his onsight of Estado Critico in Siurana; the first 9a onsight. Since then, he has become one of the sport's top performers, regularly...

IFSC commentator Charlie Boscoe reports from the first event of the 2019 IFSC World Championships in...

The latest round of the 2018 IFSC Lead World Cup took place in Kranj, Slovenia. Although this venue is traditionally host to the season finale in November, this year there remain two rounds in China - Wujiang and Xiamen - at the end of October. Team GB...

The fourth IFSC Lead World Cup round of 2018 took place in Arco, Italy last weekend alongside the 6th Speed World Cup of the season. Team GB's Jim Pope and Will Bosi narrowly missed out on lead semi-finals and placed 28th and 31st respectively.

The second IFSC Lead World Cup round of 2018 took place in Chamonix, France last weekend, alongside the 5th round of the 2018 IFSC Speed World Cup. Team GB's Will Bosi qualified for his first senior World Cup final and finished 5th in a strong field of...

The first IFSC Lead World Cup round of 2018 took place in Villars, Switzerland last weekend, alongside the 4th round of the 2018 IFSC Speed World Cup.