Maddy Cope has climbed Prinzip Hoffnung (F8b+/E9/10) at  Burs in Austria. The route has seen a great deal of attention recently, with Michi Wohlleben and Nadine Wallner both climbing the route in the past two weeks. Maddy is no stranger to hard, bold slab climbing. In 2018, she climbed Once Upon a Time in the South West – Dave Birkett's E9 6c at  Dyers Lookout.

Another strong girl sent „Prinzip Hoffnung" today!!! Girls are on fire those days. Hats off @madeleine_cope for this fast send!! Very impressive!!! —->@jacopolarcher was there to take some pictures!!! Great work👌👌

Maddy has been on a van trip in Europe with her partner Ryan for several months now. They spent the spring sport climbing around Lleida where Maddy redpointed Mind Control at  Oliana, her second of the grade and a significant step in her recovery from a chronic shoulder injury.

Maddy told UKC: 'After sport climbing around Lleida, I was ready for a change of scene. My arms were tired from the Spanish steepness, so a slab seemed like a good option.'

The pair had climbed at  Voralpsee last Autumn where Ryan made a quick ascent of Speed Intégrale (9a) and Prinzip Hoffnung is not too far from the area.

'We went to Bludenz for dinner with friends and they mentioned that we might like Prinzip Hoffnung since it is Brit style trad. It was really hot and humid, but I had a go on top rope and did all the moves and was hooked on the idea of returning to try and do it. I had seen pictures of Beat (Kammerlander) on the route and watched a video of Babsi (Zangerl) climbing it. It's one of those funny things where you see your hero's doing it but don't imagine you would actually try it.'

The route was first climbed by Beat Kammerlander in 2009. It weighs in at around F8b/+ and is protected by several microwires. He originally climbed the route on bolts but returned a decade after the first ascent and climbed it without. The grade of this climb has always been estimated at F8b/8b+ or E9/E10, but Maddy thinks it's roughly 8b/E9 to place the wires on lead.

Due to the high temperatures, Maddy was forced to work the route in the late evening and at night and she attempted her first lead in the dark by headtorch! She took several large falls before climbing the route:

What a route! It's been so much fun trying Prinzip Hoffnung - its the sort of thing slab climbers dreams are made of. Great moves, safe fall 😜 Unfortunately, hot weather and not enough time mean I'll likely be leaving this one behind. After working it out and finding the gear, I have only had time for a couple of goes... and this was my only go in the light!! Turns out climbing in the dark is harder. The forecast looks warm, question is... is it worth another head torch go?! 🔥🌚 Thanks to @babsizangerl for the wire that holds the fall 🤗 and amazing effort to @nadinewallner for sticking with this route!! @mammut_uk @mammut_swiss1862 @lasportivagram

'In the end, I decided to get up at 5 ready to try it at first light when the rock wasn't hot from being in the sun all day. It's never that nice trying hard that early but it was worth it! It was fun to take a couple of falls before doing it - it's pretty safe but the moves are insecure, and you definitely go quite far!'

After climbing Mind Control and now Prinzip Hoffnung, hopefully Maddy's shoulder is on the mend. Her aim for 2019 is to build up shoulder stability and try to stay injury free. 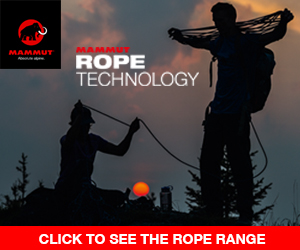 Respect the Wild - Tips for Responsible Wild Camping and Vanning

#24 - Women on a Rampage and New Alpine Routes

Maddy has made a name for herself on hard and bold trad climbing. She has made ascents of Dave Birkett's Once Upon a Time in the South West (E9 6c) and Beat Kammerlander's Prinzip Hoffnung...

In this week's episode of Lockdown Training Discussion, Maddy Cope, Neil Gresham, and Louis Parkinson tackle the topic of training movement at home.

This week's episode of Lockdown Training Discussion carries on from last...

The Final Round E9 6c by Maddy Cope

Maddy Cope has repeated Tom Randall's The Final Round E9 6c on Ilam Rock at Dovedale. This is only the third ascent...

Maddy reckoned closer to 8b when placing the wires. Beast.

This is brilliant. Looks like an amazing line and route.