The fifth round of the IFSC Boulder World Cup 2019 took place in Munich's Olympiastadion, Germany last weekend. Typically the final round of the series, this year the event was brought forward from August to May due to the hectic schedule of an Olympic qualification year. Nonetheless, a change in status to penultimate round didn't seem to dampen the traditionally electric atmosphere in the Olympic Stadium - a particularly fitting venue ahead of Sport Climbing's Olympic debut next year. Some absences due to Olympic focus once again shook up the scoreboard, but Slovenia's Janja Garnbret reigned supreme once again to take her fifth consecutive win and secure the overall 2019 title. The men's event was won by Austrian all-rounder Jakob Schubert, who took home only his third ever bouldering gold medal. UKClimbing.com was present at the event.

Great Britain was represented in the semi-finals by Emily Phillips, Nathan Phillips and Billy Ridal. A strong performance by Nathan earned him 1 top and 3 zones and placed him 14th with Billy just behind in 16th with 1 top and 2 zones. The women's semi-final was brutally difficult, with just 2 zones required to make finals. Emily Phillips came agonisingly close to topping boulder 2, which would have qualified her for the final, but she finished with a respectable 1 zone in a tough round which placed her in 14th.

Janja Garnbret revelled in the difficulty of the round, topping all four boulders in 8 attempts and appearing well and truly in a league of her own. For the first time in a long while, there were no Japanese climbers in the final. Many regular finalists, including Akiyo Noguchi, Miho Nonaka, Kai Karada and Tomoa Narasaki were absent due to their focus on lead and speed ahead of Olympic selection, having already earned two good results in bouldering (an athlete's best two World Cup results in each discipline will be used to calculate an overall combined ranking ahead of the Olympic Qualifying Event in Toulouse in November).

In the men's final, Adam Ondra (CZE) seemed on track for the win, flashing the first three boulders and requiring a zone in 4 attempts or fewer to take the win. The boulder featured a series of dynamic coordination moves on steep ground, which the commentary team expected to be straightforward for Ondra. Jan Hojer (GER) wowed his home crowd with an impressive flash after an otherwise seemingly frustrating round in which he struggled to find his feet. Suspense built up as Ondra failed to link the moves and reach the zone, missing a potential heel-hook method that Jakob Schubert (AUT) had employed to top on his second attempt. The tables turned and Jakob took the victory ahead of Ondra, providing a thrilling finale to the men's event (An interesting piece of trivia: due to the number of zones attained now taking priority over attempts to tops, Schubert won, but based on the old rules where attempts to tops took precedence over zones, Ondra would have won.) Hojer's final flash bumped him up into 3rd place. Alexei Rubtsov (RUS) placed 4th, Anze Peharc (SLO) 5th and Jongwon Chon (KOR) 6th.

With Shauna Coxsey, Akiyo Noguchi (JPN), Miho Nonaka (JPN) and Petra Klingler (SUI) absent from the women's event, the finals welcomed some first-time finalists. Mia Krampl (SLO) persevered in her first ever final with a niggling knee injury, which clearly caused some discomfort, but she managed to place 3rd after a gutsy performance including a figure-four on problem 4. Ievgeniia Kazbekova (UKR) - daughter of former competition climbing stars Natalia Perlova and Serik Kazbekov - made her first boulder final and finished in 5th place. Janja Garnbret flashed three boulders and required just two attempts on boulder 2 to take her third consecutive win of the Munich round. Garnbret has not only secured the overall World Cup title in bouldering after 5 consecutive wins, but she has also completed an incredible 62 out of the 65 boulders that she has been faced with across all rounds of the series so far. When asked whether she felt pressure to achieve a record 6th win for a clean sweep in Vail next month, she replied to Charlie Boscoe, IFSC commentator: 'Yes of course, now that I also won Munich too! Vail will be really hard but I'm looking forward to it.' Garnbret has never reached finals in Vail, having placed 7th in 2017 - the only time in her IFSC career that she has not made a boulder final.

UKC will also be attending Vail on 7th-8th June. Stay tuned on social media for Instagram stories and photos. 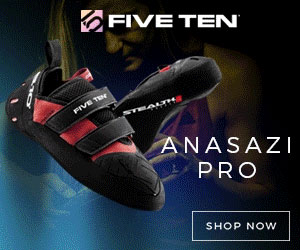 Jakob Schubert is one of the climbers who would have been jetting off to Tokyo with his eyes on a gold medal this summer. Instead in this video, we see how he initially copes with lockdown in Innsbruck, before it eases off and he's able...

In late 2019, Austrian climber Jakob Schubert made the third ascent of Alex Megos' Perfecto Mundo (9b+) at Margalef. After his successful qualification for the Olympics at the World Championships in Hachioji, Japan, he skipped the last few...

IFSC commentator Charlie Boscoe reports from the second event of the 2019 IFSC World Championships in...

IFSC commentator Charlie Boscoe reports from the first event of the 2019 IFSC World Championships in...

The IFSC Boulder World Cup series culminated in an exciting finale in Vail, Colorado last weekend. At an altitude of 2,476 metres, the round is typically challenging for competitors living at lower elevations. Despite the thin air,...

The third IFSC Boulder World Cup and the second Speed World Cup rounds of 2019 took place in Chongqing, China this weekend. In the speed event, records were shattered across the board, as China's YiLing Song set a new women's world record...

"An interesting piece of trivia: due to the number of zones attained now taking priority over attempts to tops, Schubert won, but based on the old rules where attempts to tops took precedence over zones, Ondra would have won."

Indeed. I, for one, am glad to see this change because it means every boulder counts and the last one is more likely to determine the final results, as it did this time around.

a bit harsh not to mention Fanny Gibert’s incredible performance?

Could somebody in the know explain what the whole zones thing means?

A zone is a hold considered difficult to attain roughly halfway up a problem that helps to separate the field more than just using tops. It doesn't have to be particularly high, it could be the next hold after getting in/out of a tricky start position, for example. Used to be called a bonus hold, which to my mind is more self-explanatory!

It is a way of differentiating climbers who do not get to the top of the problem. Crudely think of it as credit for getting halfway (although in reality the zone is usually not halfway and is not actually a zone, it is a hold). Does that make sense?