The Dolomites - Via Ferrata 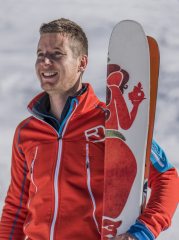 he peaks of the Dolomites are characteristically steep, with huge faces and towering summits often breaching 3000m in altitude. These stunning spires of alpine limestone are located south of the Austrian / Italian border and the mountainous area extends for 80km east of the town of Bolzano.

Located in northern Italy and with a unique mix of Italian and Austrian culture the Dolomites has the highest concentration of via ferrata in the world, boasting some 170 historic routes. The metal wires intespersed with ladders and unlikely suspension bridges give straightforward access to some of the world's most striking summits, allowing you to move quickly over technical ground that would normally require a rope. The routes are for the most part maintained by CAI (Club Alpino Italiano) and the local guides working within the area. They are free to use and are generally accessible to anyone with resonable mountain experience and a good head for heights. They provide a relaxing or good wet weather itinerary for experienced climbers and a fantastic means by which to ascend an otherwise inaccessible peak for those without the same technical climbing knowledge.

For more information on climbing in the Dolomites see James Rushforth's other articles:

The Dolomites
Climbing the Comici

Via Ferrata in the Dolomites

What is a via ferrata?
In its most basic form a via ferrata consists of a metal (originally iron - now more commonly steel) wire that is connected to the surrounding rock at numerous intervals. The purpose of this wire is twofold:
1) It provides a fixed form of climbing protection which climbers can physically attach themselves to.
2) It provides an artificial aid for climbers who can use the wire for assistance throughout the route.
Though the metal wire is the fundamental feature of all via ferrata, there are also numerous secondary elements employed as additional artificial aid. These can include (although are not limited to) stemples (large staples in the rock), steps, ladders, bridges and walkways.

Origins of the name
The term 'via ferrata' is used in most languages with the exception of German, which uses 'Klettersteig' (climbing path). 'Via ferrata' originates from 'via attrezzata', which means 'fully equipped road/route'. Common English translations cite 'iron way', 'iron road' or 'iron path', derived from 'ferro', meaning iron. In Italian the plural is 'via ferrate', whilst in English both 'via ferrata' and 'via ferratas' are used interchangeably.

Via Ferrata History
Whilst the construction of via ferrata is often attributed to the First World War there are several routes that predate 1914. There is some debate as to which is the oldest via ferrata in the Dolomites, though it is generally accepted to be either the Marmolada West Ridge or Delle Mèsules (Possnecker Path), with some reports of the former being constructed as early as 1903.

Nevertheless it was the arrival of the First World War to the Dolomite mountains that provided the catalyst for construction of via ferrata en masse. Both the Italian and Austro-Hungarian armies in the area found the wires invaluable for moving men and supplies through previously inaccessible areas. Via ferrata were constructed to defend key positions and were often the site of vicious fighting. The legacy of this terrible conflict can still be witnessed on many of the routes, with the tunnels (Giovanni Lipella), trenches (Eterna Brigata Cadore), officer quarters (Ivano Dibona), lookout positions (Delle Scalette), field hospitals (Col dei Bos/Degli Alpini and Ettore Bovero) and even an original field gun (Via delle Trincee - La Mesola) still in evidence today.

Following the war many of the via ferrata were re-equipped by CAI and used as a means of attracting tourists to the area. This was a slow process until the 1950s which saw an explosion in tourism to the area. This sudden influx of visitors rapidly led to increased environmental concerns and led to the expansion being curtailed in favour of just maintaining the pre-existing routes.
More recently some new via ferrata have been constructed in the area, the first 'modern' route being Sandro Pertini. Built in Vallunga, an area covered under the EU's 'Natura 2000' environmental protection policy, the route was shrouded in controversy as many felt the route had been built purely to commercial ends with a disregard for the environmental impact. The route was closed temporarily before being officially sanctioned by the EU in 2008, setting a precedent for other new routes to be built in the area. Ski Club 18 above Cortina was constructed in 2009 to 'enrich the mountaineering tradition' of the area, and named after the Rome ski club of the same name, whilst Magnifici Quattro in the Van San Nicolò follows part of a First World War route and was named in honour of four mountain rescue members who were tragically killed in an avalanche whilst attempting a rescue in 2009.

For more information on the First World War in the Dolomites I highly recommend The White War: Life and Death on the Italian Front by Mark Thompson which is an eye opening read. His talk at this year's Kendal Mountain Festival was both excellent and enlightening.

Via Ferrata grades
There are numerous grading systems used for via ferrata and a European standard system has yet to emerge. So far English books have adopted the Smith/Fletcher System which uses a dual numeric and alphabetic grading classification. A number (from 1-6) is used to denote the technical difficulty of a route, whilst a letter (A-D) is used to portray the 'seriousness / danger' of said route.

There are a number of guidebooks covering via ferrata in the Dolomites. Here are some of the ones I find most helpful:

The Dolomites: Rock Climbs and Via Ferrata
This guide covers climbing and via ferrata within the Trentino-Alto Adige, Bolzano, Belluno and Trento provinces. Tom Ripley's review can be found here.

Via Ferrata in the Italian Dolomites: Vol 1 & 2
Two seperates volumes from Cicerone providing a dedicated via ferrata guide, written in English covering the North, Central and Eastern Dolomites.

Klettersteigführer
I've never seen or used this guide but I've heard good things from those that have. I believe despite been German it comes with an English CD.

Recommend me some routes...

There are so many routes to choose from it's always hard to pick a 'favourites' list. Here are a few that are certainly worth a look...

When do I go? - Though it is possible to complete climbs during the winter months (some of the via ferrata make for excellent ski tours) generally speaking the best season runs from June to the start of October. However at the beginning of the season there is often still a lot of snow about and it is usually necessary to seek lower altitude south facing routes.

Lifts - Most of the lifts open around the third week of June and close in mid September, but it is worth contacting the local tourist offices for exact information if you are planning on using specific lifts during your trip.

Who flies where? - The Dolomites are easily accessible from three airports all a similar distance away. Innsbruck is the closest airport within 2 hours driving distance of the Sella over the Brenner Pass. Cars can be hired from the airport from a number of different companies. Venice Marco Polo is the other main airport within 2 and a half hours drive from the Sella. There are again a number of car hire companies. Alternatively there are several public transport options from Venice; a direct bus runs throughout high season from Venice to the villages surrounding the Sella, or alternatively a more frequent train service runs to Belluno, from where it is then possible to catch a number of buses.

Treviso airport though only small is actually 15 minutes closer than Venice if you can get a flight there. Public transport is available to the centre of Treviso or into Venice, and then you can take a train / bus as above.

Alternatively it is possible to drive from the UK via Germany and Belgium before approaching the Dolomites from the North entering at Pedraces (recently renamed Badia). I usually stay in a hotel near Munich and do the trip in two days.

Hire cars are expensive, around £150 per week. BMC members can get a discount through Hertz.

Where do I stay? - The towns of Arabba, Canazei, Cortina, Corvara, Colfasco, La Ville, Pedraces and Selva are all good locations from which to reach the popular climbing areas. Camping is available in both Colfosco, Cortina and Canazei, and hotels can be found in all of the towns. UKC regular Mike Kann is very knowlegable about the area and runs a nice set of appartments (Casa-Alfredino) near the Marmolada.

Where can I buy gear? - There are a lot of outdoor shops in any decent sized town. The best are:

Sportler - Treviso - A huge complex and only 2km from the airport there.
K2 - Cortina - A small but fantastic gear shop.
Sport Amplatz - Canazei - One of the best shops in the area.
Sport Kostner - Corvara - A good shop with attatched super-market.

What else is there apart from the via ferrata? - There is climbing and walking, the zipwire at Kronplatz (supposed to be the longest in Europe), a high ropes course at Colfosco, horse riding is becoming increasingly popular, as is mountain biking, there is also white water rafting at Brunico, canyoning at Cortina.

Road biking has long been an integral part of the Dolomite mountains and numerous prestigious races take place up the winding and tortuous passes. Apart from the Giro d'Italia, which usually passes through parts of the Dolomites and in particular often features a famous stage by the Tre Cime, the Sella Ronda and the Maratona dles Dolomites see thousands of cyclists taking to the passes.

Wet weather options - One of the most relaxing wet weather options is taking advantage of the many spa facilities in the boutique hotels. Many of these are open to non-residents and are an indulgent way to rest aching muscles and generally get pampered.
There are numerous cultural options with excellent museums such as the Messner Mountain Museum in Brunico, the South Tyrolean Museum of Archeology - home of Otzi the ice man - in Bolzano, and the two Ladin museums in San Martino in Badia and San Cassiano. The three Regole di Cortina museums - Paleontology, Ethnography and Modern Art - offer interesting insights into the history of the rocks themselves and the heritage of the people who lived around them.
Anyone with an interest in more recent history may be interested in the First World War Museum at the Tre Sassi Fort on the Valparola Pass or at the Marmolada mid station.

James Rushforth has just completed the new Rockfax guide - The Dolomites : Rock Climbs and Via Ferrata and is currently working on another guide to Italian sport climbing destination Finale Ligure.

James Rushforth is a professional photographer and you can see his portfolio on Smugmug, and follow him at JamesRushforth.com

Jim Malo
19 Jul, 2015
Just returned from the Dolomites and the Sandro Pertinin via ferrata has been taken down.
James Rushforth
20 Jul, 2015
It's a shame as it was a great route. We've updated the Rockfax and UKC databases. If you're interested some more information to be found at: http://altoadige.gelocal.it/bolzano/cronaca/2014/10/05/news/selva-scompare-la-ferrata-pertini-1.10061466 I have to be honest I thought the court cases would be ongoing for much longer and then it would take a long time for it to be decommissioned. All happened very fast in the end though. I hope it didn't spoil your day too much!
Add Comment