Enzo Oddo has made the 4th ascent of Kevin Jorgeson's Ambrosia (Highball V11) on the Grandpa Peabody boulder at the Buttermilks near Bishop, California.

Since Kevin's first ascent, both Alex Honnold and Isaac Caldiero have refined the method of climbing this 14m monster of a highball. This has made the grade come down slightly from V12 to V11, but what separates this from many other high boulder problems is that the climbing is difficult with big and committing moves all the way to the bitter end. According to Isaac, a couple of holds near the top are also slightly friable.

Bishop Bouldering says Enzo used the same direct line Isaac did and that the conditions were very windy on the day of the ascent.

16-year-old Enzo Oddo, from France, is no stranger to hard climbing, having repeated many F9a routes and also Biographie, F9a+, at Céüse. In fact, his ascent of this legendary Chris Sharma route is, so far, the only one after a broken hold which made the starting crux go from Font 7C to Font 8A. 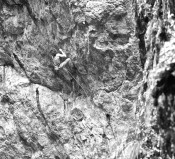 Alex Thompson
17 Feb, 2011
Video of the ascent online at http://www.youtube.com/user/PranaCollective#p/u/12/-j53HLSTv_o
Jonny2vests
17 Feb, 2011
I love that photo and the seeming futility of a spot.
Fraser
17 Feb, 2011
Very impressive.....but bordering on child abuse!
Mick Ward
17 Feb, 2011
Bloody hell - he's a long way up! Mick
Michael Ryan
17 Feb, 2011
Most impressive ascent I've heard of for a while plus he is so young and French! Once on that upper wall the potential Is death or worse. Mick in Maine , USA
More Comments
Add Comment
Loading Notifications...
Facebook Twitter Copy Email LinkedIn Pinterest