There has already been a lot of talk and speculation about the reasoning behind Nalle proposing 9A for Burden of Dreams (f9A). Let me assure you, this is definitely not something he hasn't given a lot of thought.

As we all know, grading at the upper end of the bouldering grading scale hasn't really worked for years and hopefully this is a big step in the process of setting it straight again.

Bringing something to completion that I've poured my heart and soul into for so long has been a pretty life-changing experience. I'm really thankful for all the encouragement I've received from the start! It's been a busy couple days and I see that the grade suggestion is getting a lot of reactions - as it should. A little context is needed to explain the reasoning behind it so I'll try shed a little light on that.

Proposing a grade is always a tricky thing and this time was no different. There were two viable options: 9A and 8C+. I went with 9A after a lot of thought.

It would be hypocritical of me to talk about having achieved a new level and not propose a grade that signifies that. Isn't that exactly what grades are for? The only other option would have been to propose 8C+, making Burden of Dreams one more of the 8C+ boulders proposed over the last 12 years and this doesn't represent the difficulty to me.

Rather than fixating on the grade of a specific boulder, it is more important to look at the big picture and see where that boulder sits in the grand scheme. The real issue is the whole top end of the grading scale. Everything having been packed into the 8C bracket for so long that it has been bursting at the seams for a while. There are 8C´s that have repeats in the double digits and 8C's that only a couple of the world's best climbers can even touch. It doesn't take a genius to understand that these can't be the same difficulty.

We've had long discussions about this issue among the world's top boulderers - and the continuing stagnation of bouldering grades. It is understood that the only way to restore logic to the top of end of the grading scale is if a handful of the hardest boulders are fully recognized as 8C+. As of recent years there have been 8C+'s with no-one contesting the grade.

What's causing growing pains here is that a few of the old 8C's are on par when compared with these new 8C+'s. Following the logic of the last years, this would mean that everything should to be downgraded back to 8C again. Except this is exactly what caused this whole issue in the first place.

The only solution I see is upgrading a select few of the old 8C's that clearly stick out as being harder than the rest. Recognizing that 8C+ has likely existed for some time now - not just the newly opened 8C+'s.

I climbed my first boulder graded 8C, Dreamtime, almost 10 years ago now. A boulder that was opened by Fred Nicole 16 years ago. Since then we've had 16 years of rapid progress as there are more and more professional climbers devoted to climbing full-time. And despite the level having been pushed by a remarkable amount in these 16 years, we're still stuck with the same grade according to some.

Why would we continue to bother with grades if they fail to be any indication of progress; perhaps their one and only function?

Grades, at the top end too, could serve as an asset for improving rather than being a restricting factor. Taking the safe option of proposing 8C+ would have in my view caused more harm to the grading scale than good. As always, time will tell where things settle and how the grading scale itself settles.

That's many words about grades, yet in my mind a grade is only a sidenote. What goes through my mind when I think about the boulder are the memories - good and bad - and the lessons learned along the way.

In a couple of days I will make a follow up interview with Nalle and go even more into depth on this issue.

Daniel Woods Climbs 'Return of the Sleepwalker' (Font 9A)

This short film delves into the mindset of Nalle Hukkataival as he attempts to repeat one of America's hardest problems, Sleepwalker (8C+), and balancing that with his true motivation of climbing first ascents. He explains that for him, the mom...

Nalle Hukkataival has made the 3rd ascent of Sleepwalker, a Font 8C+ first climbed by Jimmy Webb in December 2018. The problem is in Black Velvet Canyon just outside of Las Vegas and is quite possibly the hardest boulder problem in the US.... 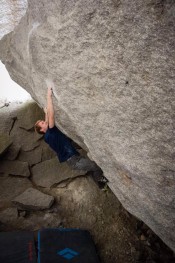 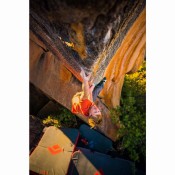 The Finnish line at the Coop, Font 8C, by Nalle Hukkataival

Nalle Hukkataival has made the first ascent of The Finnish line at the Coop in Rocklands, South Africa....

Michael Gordon
26 Oct, 2016
Well argued. Perhaps you could ask him for an example list of some of the top problems with his own opinion of 8C or 8C+ alongside?
stp
26 Oct, 2016
I'm guessing Lucid Dreaming might well be 8c+ given that it took Alex Megos 11 days to do. Nalle's Livin' Large in Rocklands has to be another contender for 8c+ I'd have thought. Woods' Defying Gravity (Colorado) maybe? Hypnotized Minds is already 8c+. As is The Process but a hold broke. Nalle's Bügeleisen Sit Start. Gioia. Must be some more...
Michael Hood
26 Oct, 2016
It's interesting to see that Font grades at the top are suffering the same problem that happened to UK tech grades at the 6b/6c/7a level. Lets hope they sort it out before it becomes as fixed and difficult a problem.
Michael Gordon
26 Oct, 2016
Some sort of 'numberitis' when no-one wants to suggest the next number? Definitely wasn't a problem for E grades...
SenzuBean
26 Oct, 2016
Leave James alone! ;)
More Comments
Add Comment
Loading Notifications...
Facebook Twitter Copy Email LinkedIn Pinterest