Why bother with the Mediterranean sea and sun when you can have Wonderful West Penwith? Samuel Wainwright exposes this gem of a climbing area in all its glory. Grab yourself a Cornish Pasty and get in the mood for some perfect seaside climbing!

Imagine a place where barren and windswept moorland collides with turquoise oceans and golden beaches in an explosion of colour, sound and nature's awesome beauty. A place of bubbling granite towers and rounded cracks blanketed in barnacles and furry sea grass. A place of adventure with deep and mysterious zawns and leaning greenstone walls. A place that for most requires no flight, no ferry, no 3 day weather window and best of all it's (arguably) the home of the UK's favourite pastry product.

Clinging to the farthest tip of Cornwall, West Penwith is a sparsely populated granite Peninsula standing up against the full might of the Atlantic Ocean. Its traditional celtic heritage, empty beaches and clear blue seas make this a popular holiday destination for most and that's before you even consider what it offers those vertically inclined! Considering West Penwith has an area just under 80 square miles it has a huge coastline of over 40 miles in length hosting around 100 different venues varying from traditional Cornish granite to compact Killas Slate and also Greenstone.

You may not have heard of the weirdly named venues or perhaps you've seen the odd photo in a magazine. However you will have almost certainly heard the names of the routes; Little Brown Jug (VS 5a), Anvil Chorus (VS 4c), Demo Route (HS 4b), Liberator (E5 6a), Pendulum Chimney (S 4b), Suicide Wall (E1 5c)...The list goes on and on with each one spawning another butterfly deep in your stomach, causing your palms to sweat and your offset nuts to tingle. West Penwith truly is Cornwall's answer to Pembrokeshire and should be high on everyone's list of places to go this summer.

Where to begin! For those new to the area places like Sennen and Bosigran are great places to start, with more classic mid-grade routes than you can shake a stick at. The former is wave washed in big seas while the latter can be climbed in any tide or sea state. For those with more experience or bigger ambitions places like Chair Ladder, Great Zawn and Carn Barra will provide fine outings with both single and multi-pitch routes from VDiff to the high extremes. Other places worth a look include Land's End and also Kenidjack. There are loads of other great venues which can feel very intimidating and isolated so it's definitely worth getting a feel for the place before you throw yourself in at the deep end.

Winds can be an issue due to its westerly position but there is such a large assortment of venues that careful planning and crag selection will usually mean you can find somewhere sheltered. Very few of the crags in the region are subject to bird bans but it's worth checking the BMC's RAD database before going anywhere. If you go early in the season you may well be sharing your belay ledges with some rather large black back guls!

The Peninsula is sprinkled with a peppering of small traditional fishing and farming communities, all of which contain an assortment of B&Bs, Hotels and self-catering properties. It's worth bearing in mind there is a CC Hut at Bosigran so if you're a member check it out – however, it probably gets booked up fast!

The major settlements in West Penwith are Sennen, St Buryan, and St Just with prices generally being higher the closer you are to a beach. For those who need a bit of hustle and bustle the fishing towns of Newlyn & St Ives on the Peninsula's edge both have loads going on and have a wonderful Cornish character, however they can get pretty rammed in high season. For the best experience grab your tent, grab your sleeping bag and go and pitch up in one of the many great campsites dotted along the coast. Top choices should include one near a pub such as Treen Campsite (07598 469322).

Contrary to popular belief there is other food available in western Cornwall that aren't pasties. There are more pubs with great grub than you've had hot dinners. If you are on the Southern side, The Logan Rock Inn in Treen is fantastic and works well if you've been climbing around Tater-du or Chair Ladder. On the Northern side The Old Success Inn in Sennen is amazing and has a great beer garden while further along the coast The Tinners Arms in Zennor and the Gurnards Head Inn all provide fine food and suitable pints to celebrate a day's cragging.

As amazing as West Penwith is, it still suffers from the mercy of the UK's climate. Thankfully the area is as famous for its surfing as it is its climbing! Crystal clear waters and rolling Atlantic swell make the surfing world class and is great fun whatever your ability. If you're accustomed to the sport in the area don't worry I won't divulge the sweet spots however for any novices both Sennen and St Ives are great venues with loads of places to hire boards and wetsuits. Other stuff that's well worth checking out is the Minack Open Air Theatre in Porthcurno and for the Poldark lovers there are several mines which offer tours around Pendeen.

Well? What are you waiting for? Make that annual leave request and e-mail your mates!

West Country Climbs is a major Rockfax guide to one of the UK’s most celebrated, sunny and diverse climbing regions. The book is fashioned in...

A Masochist's Tour of Cornwall's Offwidths 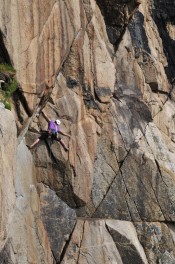 Visiting US climber Anna Hazelnutt has repeated Once Upon a Time in the South West E9 6c at Dyer's Lookout, Devon. The bold line...

Will Rupp and Jake Wilson take on the mega-classic The Cull (E3 5c) at Bass Point, Cornwall, in this windy video. Taking a rack...

Tom Bunn has made the first ascent of a striking new E7 at Tintagel Head in Cornwall. Hunter's Moon (E7 6b/c) is protected...

Offwidth
18 Jun, 2015
At Sennen the pasties in the local shop are a must (opposite the Spa?)
Alex the Alex
18 Jun, 2015
These articles are very... nice, and the pictures are lovely. But they read a bit like Guardian magazine introductions to cornish climbing - vague, obvious and a little bit bland... I reckon most on UKC will have heard of Bosi and know that there might be some surf in Cornwall. Bring back JCM's articles.
Tom Last
18 Jun, 2015
I live down in Cornwall and have to say I meet a lot of climbers on their first visit, who haven't necessarily heard of Bosigran, Chair Ladder etc. As for Carn Barra, well comparatively, hardly anyone goes there really, despite it being possibly the best signal pitch venue in Cornwall. So I think these articles do serve a worthwhile purpose as well as being well written and accurate. Chalk and cheese to JCM's excellent stuff.
Jon Stewart
18 Jun, 2015
Exactly. Only really of interest to someone who'd never considered that there might be some decent climbing in West Cornwall... maybe that is the bulk of the UKC readership, I dunno (kind of hope not)? I think a bit more on the character of the climbing would be helpful - Cornish granite can be f^cking brutal; I get my arse kicked every time I go down there...but once I'm on the crimpy delights of the Killas slate or greenstone I get a much easier time. Can we have one to Peak grit next time?
Sean Kelly
18 Jun, 2015
Worth mentioning the Lizard which can be a good bad weather alternative as well as a different experience from West Penwith. Oh! and parking at popular places such as Sennen is virtually impossible in high summer on anything like decent weather, and Land's End (Chair Ladder) can be expensive. Trick is to say that you are a member of the BMC which sometimes works or gets a reduction.
More Comments
Add Comment
Loading Notifications...
Facebook Twitter Copy Email LinkedIn Pinterest