Share
Dan Varian 7th November, 2012
This has been read 14,093 times
Share
With things cooling off a bit in the UK it seems like a good idea to do a quick whip around to summarise the best new developments over the Spring & Summer in 2012.

I thought I'd start with what I consider to be the best looking one. Ricky Bell knows what bouldering is really about. Full stop! Which for a quad pumping, wire wiggling, tradder is impressive. If it wasn't for a broken toe we might not have been blessed with the below line of Spindle 8A (although I'm sure the main cliff at Fairhead might have been developed a bit more instead). It's almost insulting that an injured trad climber put up a boulder that looks this amazing, it's not insulting though, it's just class; utter class, nice one Ricky. Ricky's added a bunch of other hard 7's to 'the head' this summer too, check out his blog or the Shortspan for info.

North of the border has been sneakily producing a lot of great new blocs this year. Whilst there have only been a few activists heading out sporadically (or at least reporting what they've done anyway) the results look great as ever. And in case you thought I'd forgotten about Dave Mac's ascent of Scotland's best looking hard problem - I haven't, it's been widely reported - here's the news item.

Glen Doll has seen development this year from a great team of psyched East-coasters. It is accessible from Edinburgh quite fast.

Young Hamish Pokotar must have felt right at home in Scotland with a name like that. Plenty of blank canvas to find sequences on too. Here's a great looking problem he put up on the Knoydart peninsula; Lady Dorris Knoydart, 7A+. Checkout the video.

Scotland's not just a playground for kids though, Well-seasoned old dogs were playing at it too! Greg Chapman had a flying visit to Mull. Greg's got years of experience turning up classics in the Lakes so it's no surprise that he found some excellent high 7's to get stuck into on his short trip.

The Big men of the UK - Mike Adams and Dawid Skoczylas - also had some fun sifting through the vagaries of Si O' Connors posed imaginings. They climbed a number of his old problems on the Gabbro at all sorts of different grades, look out for a video at some point in the future from this trip.

It's been a crap season in the county for weather and the sandstone hasn't appreciated the constant deluge:
I've managed to get out between the rain to put up a handful of new 7's & 8's. As usual they are all pretty crap (like most of the climbing in the county). Definitely not worth a trip. If you live in the south, Churnet is like a better version. See pic of strong youth Ben Davidson styling out the best new line in the county this season and one of its new all time classics.

Funnily enough it's also been a crap season in the Lakes. Most of the activity has been at quick drying or weatherproof venues. Greg's put the odd nice looking new problem up, he doesn't get out his fireside rocking chair for much more than a spot of landscaping these days, that or font 8A's. Beast of Burden is one of the Lakes' better additions this season and it's situated at Black crag (more info here). One of the UK's biggest ever genetic climbing talents, Adam Hocking, used about 20% of his natural power to climb Super Yum Yum at Carrock Fell this season too. Whilst not the most amazing problem in size; if you think you climb 8A+ you might want to call in on this 1 mover to recalibrate your ego now and again.

The Lad stones has also been brought up to date thanks to a whip around from most of the lakes keen boulderers: Greg has produced a new guide free to you all thanks to lakesbloc. Now isn't that nice!

Yorkshire has been in a bit of a slumber the past year or so (except for Sutty and Peckitt's efforts). The fact that it has very little summer lime bouldering means it often snoozes out the summer regardless, as everyone tends to turn to bolt clipping. Another sad turn is yorkshiregrit.com becoming stagnant and slowly sliding into Digital Entropy's jaws. Yorkshiregrit was one of the first online databases for bouldering and easily one of the best, if you use it please consider donating to help with the hosting costs.

The arrival of 2 strong young Penrithians on transfer loan from Cumbria may bring about some new mega lines if we're lucky, just don't expect them to be technical additions! Yorkshire still has a lot of great unclimbed blocs to do. And it will no doubt return to the forefront of UK bouldering development at some point in the near future.

Most of the interesting action this season has been on the moors at crags like Edale rocks and Kinder south. Jon Fullwood as ever has been spearheading some great new developments. Some top additions have been made like Crayon Angel (more of John's FAs).

One exception to this is that Chris Webb managed to take time out (from his utterly hectic schedule of jet setting round the world to world cups and training a lot) to climb a project at Blackwell Dale. It is appropriately titled Working 9-5 and is 8A+. The fact that almost every other hard problem in the UK in recent years has been put up by amateur athletes must have been lost somewhere. He doesn't even have kids yet. God knows where it starts and finishes as it doesn't appear to be written up anywhere. But well done Chris for making it outside and putting your awesome crimp power to use in this delightful roadside venue.

Speaking of full time workers, academic and oceanographer Pete Robins Has put up one of the best looking lines in Wales, in that it is not in Parasella's Cave and is longer than 2 moves! and it's 8B awesome. This is possibly the best bit of news of the year from here. But it's already been reported (See UKC News) so I'll shut up now. What wasn't reported is Nodder's old Project Go Motion at Crafnant which Pete climbed and reckoned it to be 8Aish. This also looks rather good. Dan Knight's Limestone addition of Paper Birds is also a fine looking new addition to The Gop and at 8A+ you'll be needing some well seasoned deltoids.

In the south Liam Fyffe has recently added two 8A+s's to Dinas Rock. Butch Cassidy and Jed Black Which will no doubt help push the scene forward down there and stop Wales being so bloody north biased, poor southerners you always get it in the neck!

This wins the hotbed of the season award as Lee Robinson goes about hunting for rocks with such zeal that I think some are genuinely concerned when they get found in their hiding places. Mike Adams has been plugging the harder gaps and has found some great looking high 7's and low 8's. Some of this season's best new lines have been in the 7's. See pic of Andy Jennings on New Horizon 7B. Lee is writing a guide to the moors so you'll probably have to wait until that comes out to make sense of the scale of what's been achieved.

I Never thought I'd be writing about Leicestershire in a bouldering round up. But sufficed to say it has yielded some new problems from the clutches of its less than aesthetic granite quarries. Mike Adams and Dawid Skoczylas have been out and about with the locals and producing hard boulders. The best looking is maybe Heathen Chemistry at Forest Rock. Forest Rock is the best venue in Leicestershire so far with several good grade 7's. That said I met some climbers from the nearbyish Matlock on my visit there and they were a little disappointed, so you have been warned. It's more a pleasant bouldering venue for locals and hardcore devotees, Stanage Plantation this is not. It does have one of the coolest geological mixes of any crag in the country though, being part slate, part granite!

Apparently there is rock south of the Churnet! and some of it looks rather good. Interestingly much of the development appears to becoming from the younger end of the spectrum, which is a fresh change. James Squire, Hamish Pokotar and Tom Newberry have all been active. The best looking new lines appear to be Tom's "The End is Nigh" a totally classic looking 8A. And "The Non Conformist", an amazing 7C arch. The former has been recently repeated recently by Mikey Cleverdon another great asset to the south west and if I may say so, its really inspiring to have Mikey back on the blocs as he's been recovering from a stroke for the majority of the last 12 months.

James is producing some great looking problems along with developing new venues for bouldering which is brilliant to see too. Checkout his video below. Who knows what him and Hamish will be crushing once they get a bit of body hair! Mind you the absence of it seems to point the way to being a wad nowadays, just look at what Ashima is doing abroad for proof of that.

All in all not a bad lot for a couple of months work, well done everyone.
Now remember these golden rules:

The above article contains a mix of droll humour, cynicism and sarcasm all rolled into one, which doesn't translate too well to the internet. If you're outraged feel free to spend a long time typing in the forum to let all that frustration out as it'll help the hits, and hits mean mo' money.

Dan is part of the Beastmaker team - Check them out to get strong!
Share:

Adam Ondra Flashes The Ace, 8B

The Leicestershire venue Forest Rock has come of age after its one remaining aid route has recently been freed - Top Slice 7c+ - a former aid route which came in at the grade of A2.

What with the new Lancashire Bouldering guidebook and the anticipation of a forthcoming BMC trad guidebook (next year we hope), 2014 was a busy year for Lancastrian climbers. For decades, Lancashire has been something of a sleeping giant. This year, the beast has stirred. 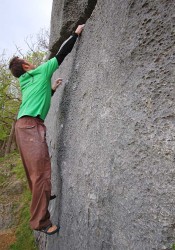 achmed_lw
7 Nov, 2012
Does anyone know where I can get the picture of Ricky Bell climbing Spindle in high resolution?!! The shot is amazing! Thanks :)
Dave Flanagan
7 Nov, 2012
It's just a screen grab from a (great) video of the ascent which Ricky will put out there soon.
Richard Hession
7 Nov, 2012
can't wait for the new north Wales guide!
JFort
7 Nov, 2012
How do I find out more about Glen Doll?
Jackwd
7 Nov, 2012
"If you're outraged feel free to spend a long time typing in the forum to let all that frustration out as it'll help the hits, and hits mean mo' money." hahaha
More Comments
Add Comment
Loading Notifications...
Facebook Twitter Copy Email