Five of the best VS Routes in the UK? 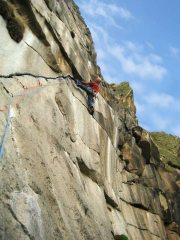 VS – just two little letters but for most climbers it is a watershed moment when they lead their first one. I remember mine – Inkerman Groove at Chudleigh Rocks in Devon - it is now pushing 40 years ago but the feeling of achievement still lingers long in the memory. I think that there are certain 'break through' grades where a distinct step up in ability and approach seems to be needed to get up them and progressing from Hard Severe to VS is one of them. Whilst many Hard Severes more often than not have one hard sequence and are not unduly strenuous, VSs tend to have moves that require good technical ability and strength along with skill at placing gear in less than comfortable positions.

My main selection below are all multi-pitch affairs spread up and down the country and give superlative climbing in some spectacular and diverse locations – but just make sure you have good skills to enjoy them by perhaps tackling some of my second selection of fine single pitch VSs first.

Also in this series:

There are few sea cliffs that match the qualities that Chairladder possesses - its perfect approach from the tiny inlet of Porthgwarra sets the scene whilst the abseil and tidal approach from the castellated granite cliff top primes the adrenaline ready for the climb itself – and what a climb South Face Direct is with its four crack pitches and a finish next to the 'granite chair' where the seawitch Madge Figgy is said to have sat and lured ships to their doom on the rocks below.

The guts of the climb are its two middle pitches that have good gear but are fairly sustained and for those not acclimatised to the granite might prove hard going. Its first and last pitches are less pressing but not to be taken lightly. If Chairladder has a fault it is the presence of gulls in the nesting season so it's best to go once they have departed.

North Wales is not short on decent VSs but Mur y Niwl is the best in my book. The climb is tucked away on Craig yr Ysfa itself in the less frequented of the big three Snowdonia mountain ranges – the Carneddeau. The route takes the intimidating southeast facing central gully wall and shows its teeth from the off. The climb's four pitches are all challenging in their own way and some of the route finding is complex. However the overriding impression of the climb is the immense exposure - especially at the stance at the end of pitch two. To avoid any anti-climax finish up the easier Pinnacle Wall another brilliant climb and a fine way to conclude the tour.

The large dark wedge of Eagle Crag sits high up in Birkness Combe looking down over Buttermere, one of The Lake District's most serene corners. Eagle Front's eight pitches wend their way up the main section of the crag taking in some absolutely fantastic climbing on superb rock. However getting the climb in condition is not a given – even during the drier months. This warning should be heeded as the climbing is sustained and in terms of difficulty at the upper end of the grade – in damp condition the seriousness of the climb heads skyward. Nevertheless for those who get the right conditions it would be hard to disagree with those that say it is the best route not to have made it into Hard or Classic Rock.

The distinctive granite mountains of Arran are some of the most enchanting to be found north of the border and the effort getting to them will be repaid - assuming the weather is kind. The classic 395m long South Ridge Direct on the Rosa Pinnacle of Cir Mhor is a stunning climb which has a big mountain feel about it, the hard climbing – on the S and Y cracks - being only part of the experience. With its long walk in and summit experience there are very few VSs to match it in the UK.

Creag an Dubh Loch is a mighty granite cliff embedded deep in the heart of the southern Cairngorm range. It takes a bit of getting to and for rock climbing is a summertime venue only, but as the SMC guidebook states 'the VS plus climber will find many routes of outstanding quality, on one of the finest cliffs in Britain' - so The Mousetrap is not really going to disappoint. However coupled with this tremendous expedition up a long crack system is the sublime camping spot at the lochan below the cliff and the fabulous walk in along the shores of Loch Muick. The climb itself is long at around 300m in total, but keep your guard up on the descent if heading down the central gully as hard neve can linger well into the summer.

5 of the better VS single pitches dotted around the country

Questor at Wyndcliffe in the Wye Valley – A long shallow limestone corner with lots of gear and in a lovely setting above the River Wye. Plenty of other good lines on the cliff.

Inkerman Groove at Chudleigh Rocks, Devon – An intimidating slim groove high on a face of superb natural limestone. Lots of other VSs on the same crag.

Mohammed the Mad Monk of Moorside Home for Mental Misfits - Denham Quarry, Lancashire - A slightly strange choice but it is a fine little pitch in a quarry that is easily accessed from the M6/M65. Solid at the grade but can be a touch sandy.

'F' Route – Gimmer Crag, The Lake District. A stunning pitch with lots of exposure and the main difficulties near the top of the climb. Lots of other VSs on this magnificent Lakeland crag.

The ones that once were VS!

Great Western HVS 5a – Almscliff , Yorkshire – One of the finest Gritstone climbs bar none.

Bow Shaped Slab HVS 5a – Cloggy, North Wales – A Hard Rock VS and like many routes on the Dark Cliff still no pushover even at the present day grade.

Central Groove HS 4b – The Dewerstone, Dartmoor, Devon. – One of the better outcrop lines in England that features a sustained first pitch and a technical top pitch all on flawless granite. Has been up and down the grades to MVS but has now settled at HS.

Tatra (reclimbed after 2014 rockfall) E1 5b – Swanage, Dorset. Many have disputed its long serving grade of VS but the debate has now been settled for good as the crux first pitch has now fallen down leaving an E1.

Tatra after the rockfall. The rock by the belayer formed the right hand side of the sentry box on the original route.
© Bob M

Most VSs in Northumberland should be a grade or two higher ;)

innesmac
1 Dec, 2014
With there being a topo of Eagle Crack does that mean there is a lakes guidebook in the pipe line.....?
Jack Geldard
1 Dec, 2014
What?! Where is Eliminate 'A'? Mark - how could you! ;-)
The Ivanator
1 Dec, 2014
...and the best single pitch VSes without Armorican? I've done 3/5 selected single pitch VSes in the article - all good, but none close to Armorican in terms of aesthetics or quality of the climbing. Good article though and I'm also curious about that Eagle Front topo... spill the beans.
odox
1 Dec, 2014
Great article Mark. Happy to see Northumberland get a mention ;-) P.S. Marcher Lord and Wilfred Prickles would get my votes!
TMM
1 Dec, 2014
No Suspension Flake? Surely OTE couldn't have got it wrong all those years ago? ;-)
More Comments
Add Comment

The Five Best E6 Routes in the UK and Ireland?

Back in 2014 we published a series of articles in/around the five best routes of each grade; however, for reasons unknown E6 escaped - hence it seemed like high time someone saw to it.

Hard Severe is a funny old grade. Not quite VS but often far from easy. The very best ones feature interesting climbing throughout and no ledge walking. As Rob Greenwood pointed out in the opening of his recent five best E3s article, the best things...

The Five Best E3 Routes in the UK?

Rob Greenwood attempts the impossible: to narrow down the 5 best E3s in Britain.

The Five Best E7 Routes in the UK?

James McHaffie gives us his Top 5 routes in the UK at E7. Coming up with a list of the 'best' has felt desperate, with this in mind I'm...

The Five Best E2 Routes in the UK?

Duncan Campbell picks his top E2 climbs. From the crumbly Mousetrap to the epic Prophecy of...

The Five Best E5 Routes in the UK?

Rob Greenwood takes us on a pumpy outing with his 5 favourite E5s. Right Wall? Nope! Strapadictomy? Nope..! So which ones...

The Five Best E4 Routes in the UK?

Tim Neill gives us his stab at the best 5 E4s in the UK. Some are easy for the grade, some not so much, but all of these...

The Five Best E1 Routes in the UK?

The Five Best HVS Routes in the UK?