Tom Randall has broken the Classic Rock Round record in the Lake District with a time of 12 hours 2 minutes 36 seconds. The round combines 34 miles of running between 15 multipitch Classic Rock routes, involving 70 pitches up to VS and 4300m of ascent. Tom beat the previous record of 12 hours 54 minutes set by Will Birkett and Callum Coldwell-Storry.

New Classic Rock record - phew that was a tough one! 🥵12hrs 2mins and 36secs. First up, I want to give thanks to the previous holders @c.coldwellstorry & @willbirkett_lakes who set the previous record of 12hrs 54mins. That was a damn fine time! It's hard to explain how hard some stuff is to do in reality, but I definitely am of the opinion that what they did and how much of a massive chunk this took off Chris Fisher's record was very impressive. I guess the combo of Lakes dark horse climbers and a lot of ability goes a long way! Second, is onto the details of the Classic Rock Round itself. I've got some data from a Garmin GPS to download for exact details, but I believe the following stats are about right. 15 Multipitch Lakes Classics (70-ish pitches up to VS), 34 miles of running, 4300m ascent and a complete tour of some of the most brilliant buttress climbing in England. You complete it unsupported, carrying your own food and water, soloing (for speed) and you can do it in any order you want. It's an awesome "pure" day out with none of the stashing tactics, fixed ropes in convenient places or friends giving you hand-outs. Lastly, is how it went. I should probably write something about it properly at some stage (Insta will limit me on characters here) but this'll do for the moment! I'd wanted to do this challenge as part confidence building "stepping stone" to something else I'm building up to, but in the end that "stone" felt like a pretty sizable "boulder". I've had a pretty crap run of luck on weather and weird injuries so when I finally had no injury, no rain, no work, no family do's this weekend I had to go for it. The weather was absolutely boiling, but I convinced myself I could get through it via psyche and commitment. The first 6hrs went really well (complete flow experience, incredible views, meeting nice people on routes) but by midday the wheels badly fell off in the heat. I lost the ability to hold down salt tablets and food through a hideous level of nausea. I found it really unappealing to run when you want to throw up... I kept diving into streams to lie down in the cool for 2-3mins every half hour to try and👉 continued in comments

We sent Tom some questions to find out more about this challenge, which he described on Instagram as being 'a stepping stone' for a bigger goal, but one which nonetheless turned out to be 'a pretty sizeable boulder...'

Whilst the routes you have to climb are fixed, where you start and finish - and how you run between them - aren't. Can you tell us a bit more about the route you took and how you went about planning the record attempt?

There's traditionally been two methods for the round - one starting at Dow and the other starting at Borrowdale. Both follow the same sequences of crags but there's a few adjustments you can make for tactics. For me, it made sense to start at a slightly higher elevation at the Dow end (running downhill all the way isn't quite the reality unfortunately) and the order of routes at each crag very much depended on what I felt most comfortable with. Initially I'd had the idea I might downclimb quite a few of them, but in the end it was faster to run down gullies and mostly do "ups" on the round.

Those that follow you on Instagram will know that navigation hasn't historically been your strongest asset, has it improved at all along the way?

Ha, no! The only thing that has improved is that I know the Lakes (well, the central part) like the back of my hand. I've learnt it the hard way and still to this day I'd have very little idea of how to use a paper map. Even one of the GPS tools I have on my phone drives me mad as the arrow doesn't spin as I turn my phone, so I get confused in about two seconds of looking at it. It's been a bit of a disadvatage on this particular challenge and I've had some fairly epic days out on my own, lost, as a result.

Familiarity is undoubtedly a major benefit to achieving such challenges: how much of the running route/climbing routes had you recced beforehand?

Loads! I'd actually tried to break this record last year but the weather was completely against me and I had to abandon. You'd have thought it wasn't that hard to get 15 routes in the Lakes dry on a single day.... but I can assure you, it's not as simple as you think. I think this is mainly because you're soloing and my personal appetite for soloing wet/damp rock is really low. It's asking for trouble, even on easy terrain. For each route on the round, I'd probably soloed each one at least three times (some of the convenient ones like Gimmer I've done absolutely loads as I just love spending a few hours climbing around on my own).

Whilst you clearly have a good few grades in hand, were there any particular routes that caused you concern due to the levels of fatigue you were likely to experience along the way?

Fatigue wasn't so much of an issue as polished feet or wet rock. Moss Ghyll I had a "safe bet" variation on the crux that was harder but fairly guaranteed to be dry as it was right out on the face away from the damp corner. Jones' threw me a curve ball on the day of attempt as it was weirdly wet right in the middle which put me off. I suddenly found myself freestyling 4 pitches up. It's not hard climbing, but you do need to keep your head together.

You're best known for hard climbing, but in recent years have been channeling more and more effort into long distance running. How have you found balancing the two side by side? You went and won an ultra marathon, right?

Balancing has been rather tricky! I can't claim in any way to be good at it, but I am improving slowly. This year I'm running and climbing better than I was the previous year and I'm also working pretty long hours as well. Mainly the recovery and strength elements of the combination are the hardest to deal with and I've found my head is a lot better at it than my slowly ageing body. All in all though, I'm really psyched to feel proper fit and healthy and be more motivated than ever. As for race results, yeah I did better than I expected, but I'll put it down to beginner's luck and a non-elite field for the moment!

Given that it was a long day, how did you approach food and hydration?

Probably not in the best way to be fair.... I'd had a fairly horrendous day out in the heat around a week before and vowed that I'd be more strategic. This time, I packed my pocket with a mini-pack of salt tablets I'd bought in Holland & Barrett the morning before and three bags of sweets. It went really well until six hours or so into the day, when the heat and sun started to affect me pretty badly. I couldn't eat the tablets or last two bags of sweets without retching and the nausea got fairly nasty. In the end, I had to sack off the energy and salt intake to just concentrate on water consumption. My energy levels felt fine but not much else did!

The first two-thirds of the day was one of my best and favourite days in the outdoors ever. I had the flow, everything felt easy and even for the first bit of suffering, it was very much in my normal realm of expectations. It was one of those days I'd love to keep reliving. That last 1/3 though... it got really difficult. I couldn't stop the nausea, my head was spinning all over the place and it was plain unpleasant. Let's just say I'm not prepared to do that to myself again, in terms of heat and dehydration. I'm not shy of some suffering, but on reflection I pushed it too far.

In an effort to speed things up I'm presuming you were climbing with your pack on - how much did it weigh and what did you have inside it?

It had a pair of shoes, 3 bags of sweets, a windproof, a foil blanket, a mobile and 2 collapsable water bottles. It probably only weighed 1 kilo?

Login as Existing User to subscribe, which will show the climbs you've already ticked. 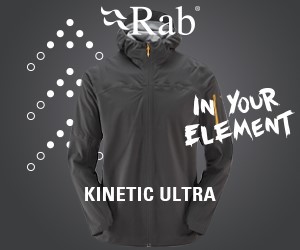 Tranter's Round Broken Twice in 24hrs

In early November 2021, after a summer of recce trips and one previous attempt that ended halfway, Tom Randall and Pete Whittaker climbed a horizontal roof crack over 2500 feet long (roughly the length of Half Dome in Yosemite). The lin...

A variety of climbs on different mediums this week: rock, ice, snow and...concrete.

In the build-up to this year's Kendal Mountain Festival, we're talking to some of the stars of the event and...

In a whirlwind weekend, Tom Randall and Will Birkett were rushing around...

This week's Friday Night Video takes us back to Pete Whittaker's multi-year battle on Recovery...

Is the tick list at the bottom wrong! Shouldn't it be Murray's Route (S) and not Murray's Direct (VS)?

Brilliant! Always fancied this as a grand day out.

Couple of bags of sweets seems like a meagre nutrition strategy!

Good climbers and fellrunners, who have done both, consider the classic rock round harder than the Bob Graham.

Time to resurrect something I always thought should be a thing - do the Bob G, but solo Lord of the Rings en route.