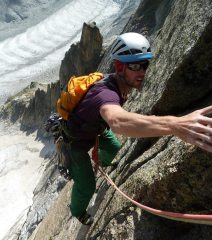 Reviewed by Andy Moles9th March, 2011
This has been read 10,233 times
Price: €15
As Dave Flanagan confesses upfront in the introduction to his guidebook, Ireland is unlikely to be mentioned alongside Hueco or Font as a world-class bouldering destination. Conditions on this Atlantic-pummelled isle are rarely optimal, and its best areas are scattered across the four provinces. However a flick through these pages reveals a cornucopia of quality sub-sport that will surprise the uninitiated in its wealth and variety – it's like finding a twenty-pound note in your back pocket. And just to ice the cake, it is a beautiful book.

It is also an important release. Information on Irish bouldering has previously been accessible in bits and pieces, most notably on Flanagan's website, The Shortspan, but many areas have remained local knowledge only. Here it is all drawn together in a well organised and easily navigated format. Irish bouldering is, at its present stage of expansion, pretty much ideal for the scope of a single guidebook, so this is not just a selection of the most developed areas – if it's known about, it's here.

The country is divided into nicely colour-coded sections. First up is the east, where the granite playgrounds of Wicklow occupy a considerable chunk of the guide. Next the south, where the Gap of Dunloe, the Black Valley and the Burren head the bill, then the wild and less developed west, and finally the myriad attractions of Donegal, the Mournes and Fair Head in the north. The variety of areas, from convenient urban venues to the remotest corners on the island, is inspiring, as is the variety of rock to explore. Here are revealed such treasures as the mythical gritstone of Fermanagh and Leitrim, and the black gabbro of the Cooleys.

While the primary function of a guidebook is obviously to enable the location of climbs, not far behind is its psyche-generating qualities. A crucial component of this is awesome photographs, and Flanagan has pulled together a superb collection from numerous contributors. Open at a random page and the chances are you will behold a piece of rock that howls to be climbed. In fact the whole thing just looks good. In its A5 landscape format it resembles Stone Country's Bouldering in Scotland, only fatter, prettier and ultimately better. Area maps are beautifully done and easy to read, as are topos. There are some plenty of nice wee touches, which I'll let you discover for yourself – don't miss the really tiny person on page 205.

Flanagan ensures the guide is as accessible to beginners and low-grade climbers as it is useful to wads, with plenty of attention to easier problems and circuits alongside the hard stuff. There is a Font-style grade-band summary for each location, and an '89 of the best' ticklist which goes all the way from Font 3 to 8b. He is also unselfish with information about unclimbed projects and areas of future potential, giving these ample description for the benefit of would-be explorers. There may be a few more of them now.

I'm sure a few penetrative criticisms would make this a more interesting review, but I don't really have any. I suppose a protective cover would have been a bonus, but really this deserves to be looked after nicely anyway. I hope you appreciate that in the light of current affairs I have resisted some corny conceit about Ireland's financial crisis. This will set you back a mere €15, which is the equivalent of about two pints in Dublin. If you are planning on spending some time in Ireland, even if not primarily to boulder, you will definitely be wanting one.

For more info on bouldering in Ireland - see the recent UKC Destination Article.

Dropping off the top of...

Bouldering Pads in back of Audi...

Frank4short
9 Mar, 2011
Just something else small to add is that Dave is a really good guy & he's self published this. So you know your money is going to a worthy individual.
paulipauli
17 Mar, 2011
Nice review Moles. I don't boulder outside and I've never been to Ireland but feel a bit tempted now.
Add Comment